The current run of performances, based on the production borrowed from the Metropolitan Opera, New York, is a glorious testimonial to the anniversary of Strauss’s birth. As the Countess Madeleine RenÈe Fleming performs one of her signature roles. The poet Olivier and the composer Flamand, both enamored of the Countess, are portrayed by Audun Iversen and William Burden respectively. The roles of the theater director La Roche and the actress Clairon are taken by Peter Rose and by Anne Sophie von Otter. The Count, brother of the Countess Madeleine, is portrayed by Bo Skovhus. Sir Andrew Davis conducts the Lyric Opera Orchestra. Time and place for the current production are designated as a chateau near Paris during the 1920s. Costumes, interior designs, and minor props support such a setting. 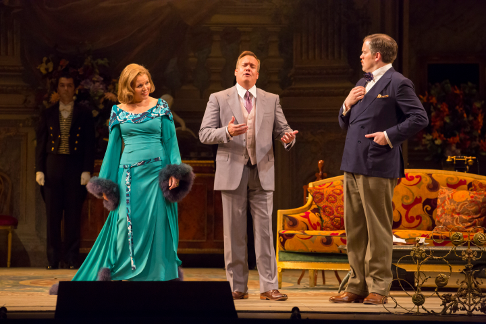 RenÈe Fleming as the Countess, William Burden as Flamand and Audun Iversen as Olivier
The thematic tension between words and music has already begun before the start of the piece. In the first scene Flamand and Olivier track the Countess’s expressions from afar while she listens, seated in a salon offstage, to a performance of the composer’s string sextet. The beginnings of large- and small-scale symmetries, both dramatic and musical, surface already now in this production. Each of the artists admits of his love for the Countess, yet Mr. Burden’s Flamand projects more enthusiastic, rising intonations on “Freundliche Gegner” [“friendly rivals”] and in his response of “Prima la musica—e— dopo le parole!” [“First the music, then the words”]. Iversen’s portrayal of the poet Olivier remains, for the moment, determined yet subdued in comparable vocalisms. Such a contrast functions well in the spirit of the piece given Flamand’s immediate, excited reaction to the performance of his composition as an artistic bridge to the Countess. During a later scene Iversen’s vocal palette blooms into enthusiastic outbursts once the Countess becomes the audience of his own poem or sonnet. As a sobering medium to both ardent characters, the slumbering theater director La Roche awakens once the sextet has been played to its close. In this role Peter Rose makes an outstanding impression as he rails good-humoredly against the “totes Papier” [“dead paper”] produced by both artists before it receives the director’s guidance. Rose’s pointed remarks that reforms in the operatic genre, as supported by Olivier and Flamand, are “Alles nur Mode!” [“Nothing but fashion!”] emerge as a realistic pronouncement on public taste in musical theater. During the balance of the scene additional characters, especially the actress Clairon, are brought under the lens of discussion before the three depart for a rehearsal of Olivier’s latest play. 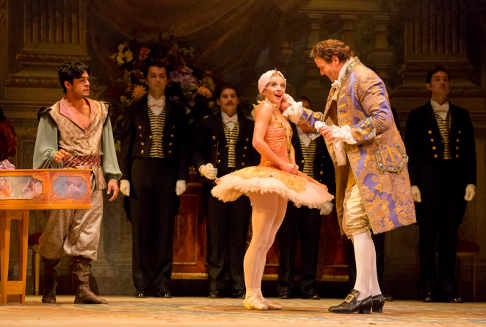 Randy Herrera, Jennifer Goodman and Bo Skovhus
The entrance of the Countess and her brother the Count signals yet a further topical scene, now a playful banter, on the relative merits of music and poetry. Ms. Fleming’s assured portrayal of the Countess Madeleine is evident in both her singing and movements. She inhabits the role as a natural extension while she graces individual lines with varying emphases, melismas, and shifts in volume. As the Count Mr. Skovhus gives biting intonation to his support of the dramatic art and to his spirited defense of Olivier’s play currently in rehearsal. Differences between the siblings are genteelly reconciled in a brief, playful dance and duet. The following scenes reunite the artists with patrons and introduce the figure of the respected “Tragˆdin” [“Tragedienne”] Clairon. Ms. von Otter performs the role as an understated foil to the others, both artists and devotees. Her initial exchange with Fleming’s Countess is telling when the latter’s rising pitch on “triumphierend” is matched by Clairon’s emphasis on the expected “Liebesszene” [“love scene”]. The following rehearsal of their parts by Clairon and the Count is amusingly staged, as Skovhus declaims the sonnet laden with devotion at the scene’s close. Rose’s La Roche leads all but the poet, composer, and the Countess into the theater for further rehearsal; he declares knowingly and with rich, bass tones to the poet “Du bleibst” [“But you should stay here”], in keeping with the opera’s marking “mit Grabesstimme” [“with sepulchral voice”]. Until the close of the first part of Capriccio, as divided in this production, the three remaining principals become involved in further debates on art and developments in their emotional attachments. The sonnet is now addressed by Olivier directly to the Countess for whom it was intended. Iversen invests his vocal line now with flashes of devotion as he begs for “Erhˆrung” [“fulfillment”] in response to Fleming’s counsel of “Geduld” and “Hoffnung” [“patience” and “hope”] pronounced with hushed yet determined tones. Of course the primacy of poetry or music is rendered more difficult to decide once Flamand sets Olivier’s sonnet to music and ultimately combines both arts. When Burden performs the sonnet for the Countess, now in its guise as a musical composition, he sings the text with true tenorial lyricism. The Countess declares that the sonnet now belongs to her, as proof of its dual devotion, but she agrees to decide for music or for poetry by the next morning. Fleming then orders via telephone that “Schokolade” be served to her guests by the servants. 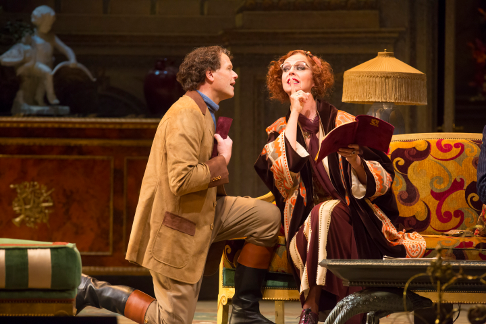 Bo Skovhus as the Count and Anne Sofie von Otter as Clairon
In the second part of this production Skovhus is clearly excited after his rehearsal together with Clairon. Once the Count and Countess exchange details on their respective liaisons, the first mention is made of an opera as compromise between the warring genres. The remaining characters return from the theatrical rehearsal and become the audience for entertainment provided by the director: a series of dances provides only a brief diversion before Flamand and Olivier resume their rivalry. La Roche introduces yet further entertainment from the realm of musical theater: in a duet presented by the Italian Soprano and Italian Tenor in appropriate costume, Emily Birsan and Juan JosÈ de LÈon sing their stereotypical roles with gusto and with exaggerated egos suited to their parts. Both singers perform delightfully in their cameo roles. The assembled company joins afterward in an octet of voices and opinions reminiscent of the cacophony in Strauss’s earlier Rosenkavalier. In response to the continued criticisms directed at his theatrical endeavors La Roche addresses the Countess’s guests in a soliloquy defending his “festliches Theater.” In this solo piece Rose’s delivery as La Roche is authoritative and eloquently sincere. Rose’s intonation describing the “ewige Gesetze des Theaters” [“eternal rules of the theater”] is precise, his legato binds words into phrases, and his sparing yet effective use of vocal decoration make this individual performance a dramatic highlight of the production. The others are assuredly moved by La Roche’s self-depiction as “Der B¸hne ein Vater” [“a father of the stage”] and seem to reconsider and develop from their earlier held positions. As Olivier and Flamand agree to collaborate on an opera, the Count accompanies Clairon in her return to Paris.
When the stage empties a cadre of male servants enters, “den Salon aufzur‰umen” [“to tidy up the salon”]. The humorous dialogue and comments exchanged by the eight male servants contribute a further level to the atmosphere of Strauss’s “Conversation-Piece.” The servants are performed, in part, by members of the Ryan Opera Center, including Anthony Clark Evans, John Irvin, Will Liverman, and Richard Ollarsaba. Facial expressions and movements are here as well-rehearsed as German diction. In the final scene of the opera the Countess inquires after her brother. When she learns from the Majordomo, performed with disciplined acting and vocal resonance by David Govertsen, that the Count has left her to dine alone, she retreats again into her thoughts on the course of the day. Fleming’s performance of the final scene is a summation of the Countess’s persona and emotions up to this point. As she asks with a rising line, “Was sagt dein Herz?” [“What does your heart tell you?”], Fleming’s wistful delivery prepares for the actual dilemma: “W‰hlst du den einen—verlierst du den andern!” [“If you choose one—you will lose the other!”], sung here with emphatic candor on those words signifying opposing rivals in love. Choosing either would upset the balance of an opera. When the Majordomo announces the evening’s souper, the tension is resolved as the Countess presents him with a hastily scrawled communication. The Majordomo’s smile is a promise of his discretion.
Salvatore Calomino