Having witnessed the
selfless sacrifices made by the Israelite Jephtha and his daughter on Sunday
when Bampton Classical Opera performed Maurice Greene’s
oratorioJephtha in Oxford, Monday evening offered more parental
hand-wringing and filial steadfastness at Covent Garden where Mozart’s
Idomeneo received its first new production for 25 years.

Directing for the first time at the Royal Opera House, Austrian director
Martin Kuöej has not unreasonably abandoned Classical authenticity for
indistinct modernism (the programme book is full of photographs of Hurricane
Katrina and Vietnam War images), but has devised an unsubtle and at times
confusing production. Set designer Annette Murschetz lines the front of the
stage with a square white frame (with gaping skylight), an oversized wood-panel
door on the left-hand sidewall. Behind the frame, interlocking black and white
walls create a series of cubes and spaces which revolve, and through which
various half-glimpsed individuals wander — rather aimlessly, but creating a
general sense of journeying and searching. Colour is used rather blatantly by
lighting designer Reinhard Traub: Ilia is bathed in a sanctifying white glow;
Elettra’s Act 1 aria heralds an aquamarine sheen; bringing news that Idomeneo
has been lost at sea while returning to Crete from Troy, the King’s confidant
Arbace is immersed in lurid lime green, misty dry ice inferring the toxic death
of the kingdom. But while such tonal gesture might seem straightforwardly
symbolic, there are motifs in this production that defying reason and sense.
Why do eleven prepubescent boys in white knee-highs and gym vests appear in
Elettra’s first aria? Why do the Cretans celebrate the survival and return of
Idomeneo, at the end of Act 1 by raising aloft a rubber shark that looks as if
it has been pilfered from a 1970s Hollywood disaster movie? In Act 3, the stage
is often foreshortened by a white back wall with a gaping, blood-splattered
oblong orifice, from which spews a flowing mound of gory rubbish — not a very
auspicious platform from which Ilia must sing her appeal to the wind to carry
her love to Idamante. 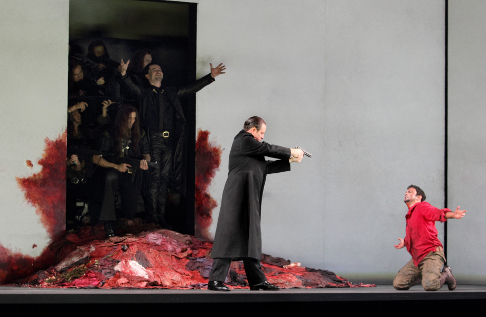 Before a note is heard, gleaming through the rain and storm surtitles tell
us where we are and what has happened, a device employed at intervals
throughout and a rather redundant one given that Mozart’s music, especially
in the recitatives, fulfils this task admirably. As the overture strikes up,
Idomeneo’s heavy mob, clad in menacing black and ray-bans (costumes, Heide
Kastler) threaten and torture the captured Trojans, while the High Priest (a
honey-voiced Krystian Adam) roams among them, weighed down by Gothic black
locks, leather trench coat and gold bling — looking as if he has got lost on
his way to a Hallowe’en rave. If the baddies and goodies are literally and
figuratively signalled in black and white, then the populace are permitted a
splash of warm Mediterranean ochres, olives and azure. Similarly, when he has
charitably freed the Trojan prisoners, Idamante’s humanity is suggested by
the replacement of his floor-length black coat with a coral cotton shirt;
subsequently splashes of pinky red (Arbace’s dangling handkerchief, for
example) expand into the encompassing red scarves and sheets draped around Ilia
and the surrounding masses when she interposes herself as a sacrificial victim,
thereby sparing Idamante’s life. With the intercession of The Voice,
pronouncing that Idomeneo must cede the throne to Ilia and Idamante, a symbol
which seemed to anticipate a bloody death is transformed into a medley of
triumphal Roman togas as Ilia is borne off stage aloft — much like the shark.

American tenor Matthew Polenzani was sure and solid as Idomeneo; he acts
with his voice (which is just as well as Kuöej doesn’t give him much stage
business), and uses his head voice to emotive effect. Polenzani shows that he
can control his breathing, phrasing, trilling and power to considerable
dramatic effect; and, in Act 3, Idomeneo’s final revelation of a real love
for the son he cannot bear to kill and Polenzani’s gently murmured acceptance
of his fate were greatly moving. 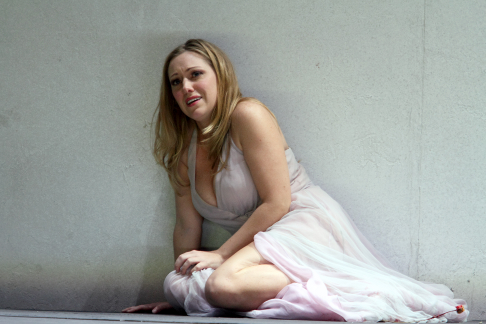 Idamante was fiercely performed by Argentinian countertenor Franco Fagioli,
but the singer’s impressive and unusually wide range, and striking power and
vocal agility, are weakened by poor verbal clarity and an unusually
‘soprano-like’ tone that not all will like and which did not blend well
with Polenzani’s noble warmth or Sophie Bevan’s crystalline soprano.

Sophie Bevan was an outstanding Ilia. Stunning in diaphanous chiffon, in the
opening Act 1 ‘Padre, germani, addio’ Bevan looked as pure as her silvery
soprano sounded, even though she had to begin singing from a prone position
which can hardly have been conducive to vocal ease and comfort. ‘Se il padre
perdei’ was infinitely warm and elegant, but surprising accompanied by
coquettish gestures which would surely have left Idomeneo unsure as to her
intentions.

As Elettra, Swedish soprano Malin Bystrˆm was Bevan’s equal. Ordered by
Idomeneo to depart for Argos with Idamante, Elettra waited with gleeful
anticipation, her white cloak masking the temptress’s slinky black dress,
though red leather gloves and stilettos reveal her seductive intent. When
Elettra turns and pockets the key of the panelled door, Idamante’s lack of
free will is made clear; and Bystrˆm’s plush, gleaming tone in ‘Idol
mio’ made it impossible for Fagioli to resist. Bystrˆm tired a little in the
elaborate passages in Act 2 and in Act 3 her final aria of torment ‘D’Oreste,
d’Ajace ho in seno i tormenti’, though still dramatic and effectively
alternating dejection with fury, she was less focused of tone, the phrasing
sometimes a little breathless. But, this was still a striking portrayal by
Bystrˆm. 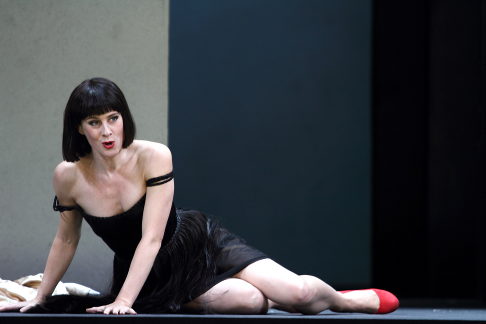 As Arbace, French tenor Stanislas de Barbeyrac was superb. Dressed in
bobble-hat, lumberjack checked shirt, and sporting skew-whiff spectacles with
one lens clumsily patched (the moral blindness of the King’s confidant?) and
trailing a battered accordion (eh?), de Barbeyrac sang with unfailing beauty;
his Act 2 aria, ‘Se il tuo duol’, in which Arbace tries to salve
Idomeneo’s anxiety and advises that another sacrificee may be substituted for
Idamante, was enchantingly expressive.

French conductor Marc Minkowski, making his house debut, conducted fluently
creating an organic flow from number to number. An energetic presence in the
pit, his baton often raised perhaps unnecessarily high for the benefit of the
cast, Minkowski perhaps didn’t quite draw enough ‘punch’ from his players
during the overture, especially given the thuggery on stage, but during the
evening there was much fine playing. The string playing during the accompanied
recitatives was full of character and there were some confident solos, not
least from the bassoon during Idomeneo’s Act 2 ‘Fuor del mar’.

Because the action is so frequently pushed to the front of the stage, the
singers can often do little more than stand and deliver — although there is
some clichÈd floor/wall-writhing. As Mozart’s choruses play a significant
part in the action, this is something of a problem, but Kuöej finds a
‘solution’, in static gesturing: thus, as thus the Cretans prepare to bid
Idamante and Elettra farewell, they draw from flimsy white plastic bags some
floppy fake fish and wave them about like plastic boats — it all feels more
like ‘drowning not waving’ despite their favourable observations about the
propitious calm sea. When there is busy stage movement the result is
indistinctiveness, as when this leaving taking is interrupted by insurrection
and the dramatic chaos results in the chorus losing touch with Minkowski’s
beat.

If, despite the heavy-handed but often abstruse symbolism, we were in any
doubt about the ‘meaning’ of Kuöej’s ‘concept’, the slogan on the
curtain which falls after The Voice’s intervention — sung with
Commendatore-like resonance by bass Graeme Broadbent — makes things
absolutely ‘clear’: ‘Utopias fall. Rebellions decay. The rulers remain.
And the people grow colder. Rigid. Under the sign of Pisces.’ Then, during
the closing ballet, the revolving stage reveals: first, Idamante (black-clad)
presenting his new bride (in traditional white nuptial-wear) to his people, the
bloody detritus now purified by a white sheet; second, the purposively posed
prepubescents, equipped with pistols and Kalashnikovs; then, a return of the
matrimonial pair, white sheet now daubed with trickling blood; and finally the
chorus, attired for the operating theatre in scrub gowns and caps. The message:
the wounds of the world can never be healed?

Kuöej’s curtain call inspired a volley of boos. But, if one doesn’t try
to work out what the accordion or the gaggle of school boys are all about, the
production is worth seeing — or rather hearing — for the quality of the
singing and the musical commitment of voices and instrumentalists alike. Just
try to ignore the shark.