And it is a mystery why it’s taken this long to see the German
composer’s sole opera with its message of hope never more sorely needed than
today. Kudos to MO’sGeneral Director/CEO Larry Desrochers,
who also directed the 150-minute production (sung in German with English
surtitles) for choosing this opera that also commemorates the historic opening
of Winnipeg’s Canadian Museum for Human Rights — the first national museum
built outside the country’s capital Ottawa.

Desrochers’ vision transplants French librettist Jean-Nicolas Bouilly’s
original story to 1989 Cold War Germany, circa the time of the fall of the
Berlin Wall which lent its own contemporary relevance.

Saskatchewan-born soprano Ileana Montalbetti in her company debut as
protagonist Leonore proved well worth the wait. Her chameleonic ability to
morph between manly Fidelio and devoted wife Leonore is as remarkable as her
strong, effortless voice and dramatic skills. Her powerhouse ‘big moment’
aria“Abscheulicher, wo eilst du hin” in
which she resolutely vows to save her husband easily deserved one of the first
bravas of the night.

Canadian tenor David Pomeroy compelled in his role debut as shackled
political prisoner Florestan, his dramatic voice first heard as a bellowing cry
of human suffering during his Act II opening recitative/aria “Gott!
welch‘ unkel hier! In des Lebens Fr¸hlingstagen.”
His keen acting skills perfectly balanced both worlds of struggle and
strength; not inspiring pity but true compassion as he collapsed in chains
until finally rescued by Leonore. 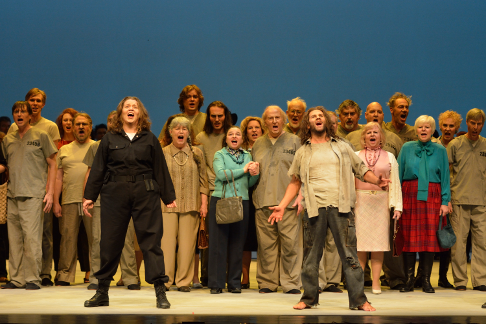 Admittedly, the dynamic between the lead couple did not always ring true.
Although Fidelio is ostensibly an opera of ideas, at its core it
remains a deeply abiding love story. After Leonore finally saves her husband,
she ecstatically sings of “indescribable joy” — albeit across the stage.
After being separated for two years, wouldn’t she immediately rush into his
arms? This emotional disconnect became the production’s only flaw.

Nevertheless, all was quickly forgiven during the climactic finale where the
stage floods with scores of real-life heroes and heroines — former refugees
now making their home in Winnipeg — who all carry within themselves their own
true life Fidelio opera. Their dignified presence as the MO Chorus
(prepared by Tadeusz Biernacki)sings, “God tests us but
does not desert us” moved many in the opening night crowd to tears that
became the crux of the entire production. There could be no more intensely raw,
authentic moment on any stage, operatic or theatrical alike in our city all
season long, with the powerful image not soon easily forgotten.