It would be hard to imagine a musician today who is more politically active
than Daniel Barenboim. As just one example, the success he has achieved since
1999 with his West-Eastern Divan Orchestra (comprising young Israeli,
Palestinian and Arab musicians) is living proof that Art can prevail when
politicians continuously fail. That said, it is hardly surprising that Maestro
Barenboim made his farewell as Musical Director of La Scala with Beethoven’s
only opera, which like the last movement of the 9th Symphony, extols the
eternal values of brotherhood, peace, tolerance and freedom.

Barenboim’s personal connection to this opera is almost palpable and as
Musical Director, he must have approved the choice of English director Deborah
Warner to follow in the footsteps of Otto Schenk, Giorgio Strehler and Werner
Herzog in bringing Fidelio to the Scala stage. The
contemporary and perhaps deliberately location-neutral stage setting by Chloe
Obolensky (a large, drab, cement-columned, ghetto-esque courtyard — curiously
without any visible cells) encouraged the universal themes of the dramaturgy to
resonate with a 21st century audience almost inured to brutality and injustice.
Certainly Madame Warner brought out consistently fine acting from all
protagonists, but as in many modern adaptations, there were some serious
inconsistencies between text and direction. When Leonore asks Rocco to let the
prisoners out for some fresh air because the weather is so wonderful (Heute
ist das Wetter so schˆn) the semi-subterranean West Side Story-ish cement
space was still so gloomy there was hardly any light at all. Gott, welch
Dunkel hier indeed. Much more difficult to understand was the
final scene when the prisoners were freed as the result of a massive break-in
rescue mission led by rather motley, hard-hatted urban guerrillas and not as
Rocco states, due to a general pardon by the King. ( Der Minister hat eine
Liste aller Gefangenen…alle sollen ihm vorgef¸hrt werden.) To fit her
crypto-Che Guevara liberation concept, Madame Warner cut from the dialogue
Rocco’s specific instruction to Jacquino to free the prisoners (ˆffnet
die oberen Gef‰ngnisse! ) which was a bit naughty. If regal clemency was
good enough for Beethoven, Sonnleithner & Treitschke, why not for Warner?
Similarly, after Don Fernando praises the virtues of liberty, love and
brotherhood ( Tyrannenstrenge sei mir fern. Es sucht der Bruder seine
Bruder und kann er helfen, hilft er gern) instead of Don Pizzaro being led
off to an uncertain fate, a very loud gun shot is heard. Summary execution is
hardly in the spirit of brotherly compassion. Finally, when all are extolling
the praises of Leonore’s extraordinary devotion and courage (Stimm in
unsern Jubel ein! Nie wird es zu hoch besungen, Retterinn des Gatten sein
!) Madame Warner has Marzelline sulking prominently at the front of the stage
then engaging in some superfluous business with Jacquino before giving him a
kiss and running off. The domestic trivialities and petty adolescent
infatuations of Act 1 have been completely subsumed in Act II by issues of
momentous universal truth and importance. It is no time to worry about the
selfish disappointments of a miffed teenager. This part of the direction was
both irritating, distracting and absolutely unnecessary. Furthermore, the
general confusion and chaos of the final staging marred what was otherwise
exemplary singing by the chorus. 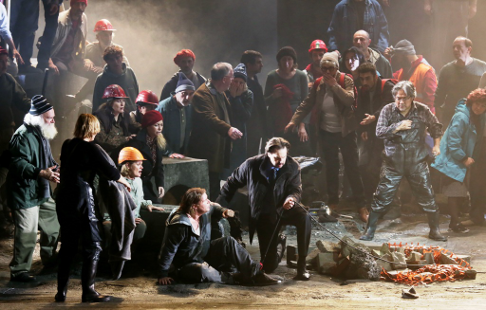 As mentioned, the acting by all singers was outstanding and even more
impressive in close-up focus on the subsequent RAI broadcast. Florian Hoffmann
as Jacquino was a very credible frustrated teenager in jeans, hoodie and white
T-shirt which read ‘WOW!’ His appealing light tenor was slightly
overpowered by the orchestra in the opening duet with Marzelline and following
ensembles, but on the whole this was a very convincing performance. As the
object of his unrequited affection, the Marzelline of Mojca Erdmann was very
well acted and sung. A highly attractive stage appearance and agreeable vocal
colour made Jacquino’s ardour entirely understandable. Although the voice
seemed to spread occasionally when forte in the upper register, her
Act I aria ‘O w‰r ich schon mit dir vereint’ was charmingly sung
and her cantilena in the sublime ‘ Mir ist so wunderbar’ quartet
was extremely well balanced with the other singers. Falk Struckmann has been
snarling Don Pizzaro for quite a long time but apart from a rather silly and
spivvy Mafioso-style suit, his interpretation seemed fresh and suitably
fiendish. His astonishment at finding out that Fidelio was actually a woman
(sein Weib?) in the great confrontation scene in Act II was utterly
convincing. The Don Fernando of Peter Mattei was mellifluously sung as ever,
although his appearance was entirely without gravitas and he looked more like a
smug property developer bringing news of a successful rental assistance plan to
under-privileged tenants than a compassionate Minister of State rejoicing in
the honour of freeing political prisoners. As Rocco, the Korean bass Kwangchul
Youn enjoyed a big success with the audience. Certainly an Asian physiognomy
would have been somewhat unlikely as a State gaoler in 18th century
Spain, but in this location-ambiguous production, it didn’t jar at all.
Possessing a very appealing warm baritone timbre and singing (and speaking)
with perfect German diction, this was a performance full of personality,
humour, subtlety and musical insight which fully deserved the accolades he
received from the notoriously picky Scala pubblico. Florestan was sung
by Klaus Florian Vogt. Whilst not having the meaty macho tenor klang
of Jon Vickers or James King, this Florestan’s more lyric timbre worked
extremely well and projected effortlessly over the orchestra from the opening
impassioned G natural on ‘Gott’, through themerciless
tessitura of theO namenlose Freude duet to the
concluding Wer ein solches Weib. The luke-warm response he received
during the curtain-calls was difficult to fathom. The standout performance was
unquestionably that of Anja Kampe as Leonore. Like Falk Struckmann, Madame
Kampe is no stranger to her role, but managed to infuse the part with such
spontaneous emotion and total commitment, it was an absolute triumph. Combining
the intelligence and dramatic insight of Hildegard Behrens with the vocal
technical assurance of Birgit Nilsson, this was in all respects an extremely
fine interpretation. Despite a slightly shaky exposed top Bb on
Tˆdt’ erst sein Weib! there were wonderfully powerful low
C# chest notes (wie Meereswogen) in the Abscheulicher!
recitative, beautiful dulcet piano word-colouring on
Farbenbogen, a vibrato-free perfectly pitched top B natural
on erreichen and impressive accuracy and clarity during the
fioratura and leaps in der treue Gattenliebe. Bravissima
Anja! 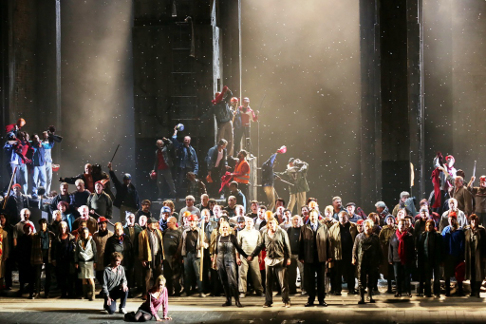 The greatest ovation of the evening however was for conductor Daniel
Barenboim and the La Scala orchestra. The maestro opted for the less familiar
but longer and more symphonic Leonore Overture No. 2 in C Major to start the
performance over the usual E Major alternative. This meant cutting the even
more dramatic Leonore Overture No. 3, usually included by conductors such as
von Karajan and Bernstein and played in most German houses during the scene
change just before the Act II finale. Barenboim’s conducting was so full of
nuance, unforced rubati and meticulous attention to the composer’s
markings it is difficult to single out specific sections of the
partitura for particular praise. Every crescendo and
diminuendo, from the strings and winds in the sixth measure of the
overture to each sfp, sf and marcato in the tremendous
conclusion of Retterin des Gattin sein were played with flawless
precision and clarity. This was not just a reading of rhythmic and dynamic
exactitude but of gorgeous orchestral colouring as well — the opening cello
passage to Mir ist so wunderbar and the soaring oboe solo in
Leonore’s Welch ein Augenblick being just two examples. The
performance was a worthy Abschiedsgeschenk from a maestro who has not
always enjoyed the approbation of the mercurial Milanese, some of whom still
squawk about the Simon Boccanegra fiasco in 2010. Whether the same
fondness will be felt for Deborah Warner’s production remains to be seen.

The audience at this, the fourth performance, was not quite as enthusiastic
as at the premiere and there were no ovations after the overture or arias.
Perhaps they confused Fidelio with Parsifal. Local press
reported the applause at the opening night curtain went for 15 minutes. One can
imagine that having paid over US$3,000 a ticket, the chic prima
rappresentazione crowd was determined to have a good time.