The composer started to set Caron de Beaumarchais’ third book, La MËre Coupable (‘The Guilty Mother’) but he and librettist William M. Hoffmann could not complete their work in the allotted three years. Actually, writing The Ghosts of Versailles took seven years and the Met did not premiere it until December 19, 1991. It was a major success, however, and the company revived it for the 1994-1995 season.
On February 7, 2015, Los Angeles Opera mounted a monumental production of The Ghosts of Versailles. The work, which composer Corigliano calls a grand opera buffa, opens after the deaths of many of its characters. Costume designer Linda Cho clothed the singers in detailed soft colored eighteenth century costumes. Because many people had been beheaded she wrapped the heads of dancers in black. Director Darko Tresnjak made sense of the opera’s complicated story and enabled his singers to create realistic characters. Scenic Designer Alexander Dodge gave us a fabulous illusion of the palace at Versailles and accommodated some short opera-within-an-opera scenes on the set. 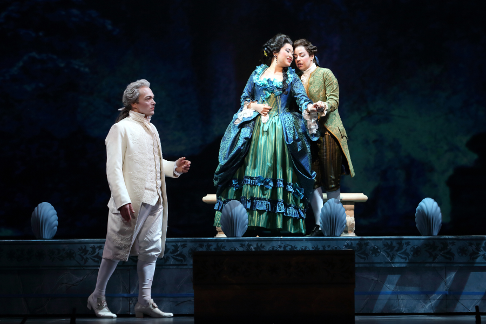 Christopher Maltman as Beaumarchais with Guanqun Yu as Rosina and RenÈe Rapier as Cherubino
Some characters, of course, came directly from the Mozart and Rossini operas. Tenor Joshua Guerrero was a handsome, robust voiced Count Almaviva. Mezzo-soprano Lucy Schaufer was an amusing Susanna who sang a charming duet with soprano Guanqun Yu as Rosina. Following the story line of La MËre Coupable in which Rosina has an affair with Cherubino, Yu sang a delightful duet with mezzo RenÈe Rapier as well. Rosina’s son and Almaviva’s daughter, Leon and Florestine, portrayed by Brenton Ryan and Stacey Tappan, sang with honeyed tones. For their pieces, Corigliano’s music had a Mozartian sound and included some quotations from the characters’ original music.
For scenes with ghosts, he offered much more modern sounds. Patricia Racette was a plaintive Marie Antoinette and Kristinn Sigmundsson a stentorian Louis XVI. Lucas Meachem was an energetic and sonorous Figaro who never tired despite the length of his role. Christopher Maltman, inhabited his role as Beaumarchais with conviction as he cared for the doomed queen. There were two fascinating cameos in the first act. Patti LuPone enchanted the audience as Turkish dancer, Samira, who enters on a pink elephant. Victoria Livengood sang a faux Wagner aria with gusto, only to end with a pie to her face. Later she was a sophisticated woman with an enormous hat.
The villain, BÈgearss, sung by tenor Robert Brubaker, pretends to befriend the nobility, but in reality he is an unscrupulous double agent. In Act II he is first seen abusing his servant, Wilhelm, played by the amusing Joel Sorensen. Later he leads a mob that raids the Count’s ball in an effort to secure the queen’s most valuable necklace. In the end, Figaro and Susanna leave in a hot air balloon as Beaumarchais regains the necklace for Marie Antoinette who chooses to go to her execution rather than change history.
This buffa opera offered aerialists and other circus acts, enchanting dances, and precise choral ensembles. Aaron Rhyne’s projections created varied ambiances and York Kennedy’s lighting made everything come to life. Under Grant Gershon’s direction, the chorus sang with harmonic precision while acting as individuals. James Conlon held the entire enterprise together with flexible rhythms and dramatic tension that never lagged. Ghosts is a truly enthralling opera that deserves to be seen and heard more often. This was, indeed, an extraordinary evening.
Maria Nockin