Pierre-Augustin Caron de Beaumarchais wrote Le Mariage de Figaro (The Marriage of Figaro) as a sequel to his Le Barbier de Seville, (The Barber of Seville). In his preface to the play, the author notes that it was the Prince of Conti who requested him to continue the story. Figaro, who actually represents the author, advocates revolution much more avidly in the play than in the opera. The play’s Paris premiere on April 27, 1784 was an enormous success. It ran for sixty-eight consecutive performances, earning higher box-office receipts than any other eighteenth century French play. Sources say that the author donated his profit to charity. The first English production opened late that same year and ran into early 1785. 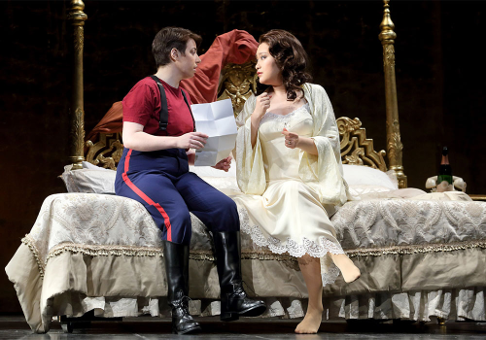 Renee Rapier as Cherubino and Guanqun Yu as the Countess
Beaumarchais was a great deal more than just a playwright; he was also an arms dealer who was active in both the French and American Revolutions. Before 1778, when France officially entered the American war, the writer saw to the delivery of munitions, money and supplies to the colonists. The Central Intelligence Agency still has a file on him that was not declassified until 1993. It can be seen here.
On March 26, 2015, Los Angeles Opera presented Mozart’s Le nozze di Figaro (The Marriage of Figaro), the libretto of which writer Lorenzo da Ponte based on Beaumarchais’ Le Mariage de Figaro. The Ian Judge production featured jewel-colored box sets by Tim Goodchild that threw the voices out into the hall. Only for the finale did the set open up on to a garden that filled the whole stage and at the very end featured actual fireworks. The eclectic costume designs by Deidre Clancy did not set the action in any particular era.
Roberto Tagliavini was a magnificent Figaro who commanded the stage while out manouvering the Count. Tagliavini has a stentorian bass baritone voice with a robust delivery. He is a valuable asset to the company, as is Operalia winner Guanqun Yu who sang the Countess. She sang with radiant, creamy tones and impressive technical ability including an exquisite trill. As the Count, Ryan McKinny was a strict taskmaster who thought no underling should notice his foibles. He sang with dark, vigorous sounds. Pretty Yende was a piquant Susanna who paced herself well for this long role. She sang her last act aria with floods of lustrous tone. RenÈe Rapier’s Cherubino was a bubbly teenager who kept the action moving swiftly. His girlfriend, Barbarina, portrayed by So Young Park, sang her aria with radiant silvery tones. I understand she will sing the Queen of the Night next year. 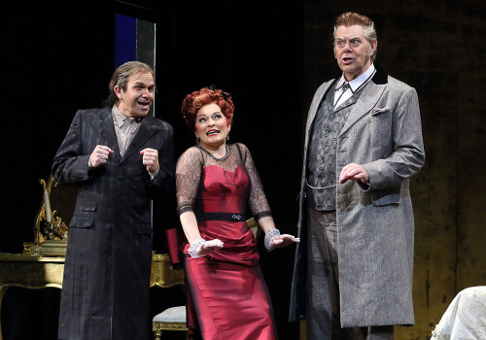 Robert Brubaker as Don Basilio, Lucy Schaufer as Marcellina and Kristinn Sigmundsson as Doctor Bartolo
Bass Kristinn Sigmundsson was a lawyerly but lovable Dr. Bartolo who sang his patter with speed and accuracy. As Marcellina, who was once his lover, Lucy Schaufer was the embodiment of a difficult 1950s superdiva, and she sang at least as well. Joel Sorensen was a wonderfully amusing notary, Philip Cokorinos a convincing drunk, and Robert Brubaker a malicious Don Basilio. Chorus Director Grant Gershon’s singers sang with clear diction as they communicated Mozart’s subtle nuances.
One of the best reasons for attending opera in Los Angeles is the conducting of James Conlon. His Mozart is always magical and this performance was no exception. His tempi were fresh and his interpretation revealed sonorities that are occasionally missed. Los Angeles Opera brought us a fabulous cast and they sang one of the best renditions of The Marriage of Figaro that I have head in quite a few years.
Maria Nockin