There’s lots of life left in Mary Zimmerman’s handsomely staged and
remarkably fresh Metropolitan Opera production of Lucia di Lammermoor,
which debuted in 2007 with Natalie Dessay in the title role and has been
reprised here several times since.

There’s lots of life, too, in the voice of Albina Shagimuratova — the
title character in the company’s 2015 reprisal that opened March 16.

From a purely visual perspective, Shagimuratova may not get everyone’s
vote for the most persuasive Lucia to have populated a Zimmerman production —
which besides Dessay has included Annick Massis, Diana Damrau and Anna
Netrebko. Nor is Shagimuratova likely to win any awards for best actor. But if
the Russian soprano does not entirely look the part of the fragile vulnerable
tragic heroine, she sure does sound it. Of the three Zimmerman Lucias I’ve
heard to-date (Dessay, Netrebko and Shagimuratova), none has surpassed the
sheer beauty and agility of the latter’s dramatic coloratura soprano.

Donizetti’s opera, a perennial favorite since its Neapolitan premiere in
1835, is loosely based on Walter Scott’s The Bride of Lammermoor —
the historical novelist’s 1819 tale of a feuding pair of Scottish noble
families, the Ravenswoods and the Lammermoors. (Zimmerman moves the setting a
couple of hundred years forward to the Victorian Era.) 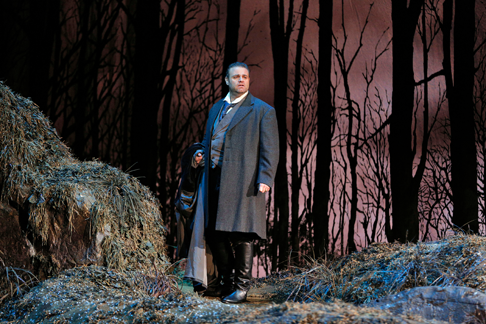 Lucia, utterly dominated by her manipulative brother Enrico (Luca Salsi), is
forced to agree to an arranged marriage with Arturo (Matthew Plenk) — a
wealthy nobleman with good political connections. Enrico is counting on Arturo
to rescue him from financial ruin. Lucia, however, loves Edgardo (a Ravenswood,
played by Joseph Calleja) and understandably keeps her ongoing rendezvous with
her lover secret. When Enrico forges a letter to convince Lucia that Edgardo
has abandoned her, the brokenhearted woman reluctantly agrees to the arranged
marriage. Later, when Arturo takes his new bride to the bridal bedroom as the
wedding guests party downstairs, Lucia goes mad and fatally stabs her new
husband. Doused in blood and in the throes of vivid hallucinations, she sings
the iconic Mad Scene.

The role of Lucia (Lucy Ashton in Scott’s novel) demands more from the voice
than Italian bel canto beauty of timbre to pull it off. The singer
must have strength, stamina and a dependable top range (Donizetti wrote high
Fs, though it’s customary for singers nowadays to transpose down to a more
manageable E-flat).

Vocally, Shagimuratova has it all — as could be seen early on during the
scene at the fountain in the woods outside Ravenswood Castle. Her delicate
delivery and superb intonation in her opening numbers (Regnava nel
silenzio and the Quando rapita in estasi that followed) put the
listener on notice that there would be good things to come. Though one may
challenge the merits of her Italian diction (Shagimuratova has an occasional
tendency to close off the vowels when descending from high to low registers),
there was never a loss of focus in her voice, or in its glimmering tone,
throughout the register changes.

By the beginning of Act Two, the only remaining question was whether she
would maintain this strength and stamina through the third act Mad
Scene. (Spoiler alert: She did.) Shagimuratova remained in strong voice
throughout this lengthy number, showing no signs of fatigue — and her final
E-flat was firm and secure. She also produced several breathtaking moments with
her whisper-quiet phrases.

If singing were all that mattered in opera, Shagimuratova would claim her
spot among the most exciting sopranos on today’s circuit. But opera is drama as
well, and that’s where she comes up short. After reading the forged letter,
Shagimuratova’s character needs to radiate an immediate sense of deep pathos at
having been abandoned by Edgardo, yet her porcelain doll face appeared largely
bereft of emotion. And at the dramatic moment when unexpectedly confronted by
an accusatory Edgardo at the end of Act Two, Shagimuratova could only muster a
look of bewilderment, not devastation. 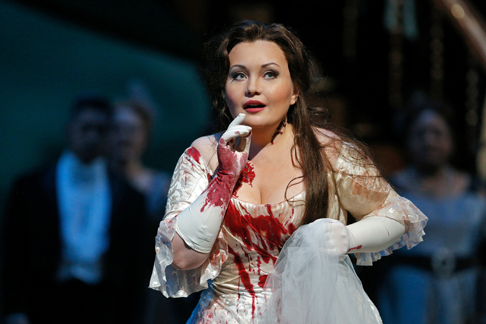 The rest of the cast also fell short with respect to dramatic integrity,
with the notable exception of Joseph Calleja — a consummate artist whose
superb singing is just one component in a well-rounded artistic package.

Calleja, showing no apparent signs of the flu that affected his performance
at the March 16 opening, sang the role as Lucia’s love interest with a
handsome and deeply expressive tenor, radiating a steady stream of grief within
the timbre of his voice.

Like Pavarotti and Juan Diego Flores, Calleja possesses a unique quality to
his voice that cannot be mistaken for any other singer. His tenor exudes such a
pronounced degree of emotion and nuance, it occasionally borders on maudlin.
One such moment came as he bemoaned his situation at his father’s grave
before the Sulla tomb ache rinserra, where Calleja’s whining seemed
just a bit over the top. Still, any overacting on the part of the Maltese tenor
proved a welcome contrast from the generally drab dramatic efforts of the other
singing actors. (Only Salsi, I felt, was able to pull his weight.)

If the role of Lucia is defined by the Mad Scene, the role of
Edgardo is defined by his singing and acting in the third act. And Calleja did
not disappoint. His chilling confrontation with Salsi at the opening was
gripping, and the tenor had plenty left for his final aria Tu che a Dio
spiegasti, which he colored with wistful nuance of voice.

As Enrico, Luca Salsi appeared determined at all costs to project well
throughout the large auditorium. Though his voice showed signs of strain at
times, Salsi’s powerful and fiery demeanor came through loud and clear
throughout Act One. In the act that followed, his voice continued to tighten
when threatening Lucia in Se tradirmi tu potrai, and he had some
ensemble problems keeping in-sync with the orchestra. Still, Salsi’s character
was commanding and vengeful during his many confrontations with Lucia.

Alastair Miles, as Raimondo, sung the role as Lucia’s tutor and protector
with a pleasant, if largely under-projected, bass. Though he grew increasingly
stronger as the performance unfolded, Miles’s voice lacked the depth of what I
consider a true bass, and he never sounded entirely comfortable in the low
register during the Ah! Cedi, cedi, when he counsels Lucia to abandon
Edgardo and accede to her brother’s wishes by marrying Arturo. The British
bass’s great number in Act Three (Dalle stanze, ove Lucia), where his
character describes the horrifying sight of a dead Arturo with Lucia standing
over him with a bloody knife, could have been more weighty.

Though Arturo doesn’t get much time onstage, tenor Matthew Plenk sang his
part with a sweet, lyric tenor well suited for bel canto. Perhaps the
Met will give him more to do in the future.

Daniel Ostling’s details-oriented set design — from the detailed park
outside Ravenswood Castle to the impressive winding staircase — is one of the
most striking components of the Zimmerman production. Lighting designer T.J.
Gerckens’s ever-so-gradual crescendo of light in the forest, as daybreak
approaches the two lovers’ hideaway outside the castle, was breathtakingly
effective.

Conductor Maurizio Benini led a well prepared Metropolitan Opera Orchestra
with workable tempos for the singers and suitably dramatic accompanied
recitatives between arias. The celebrated flute solo played by Denis Bouriakov
during the Mad Scene was quite lovely, especially in the duet cadenza
for flute and voice. (This was actually interpolated into the opera some 50
years after its premiere, specifically for Nellie Melba.) Equally lovely was
Mariko Anraku’s mellifluous first act harp interlude during the scene at the
park, as Lucia waits Edgardo’s appearance.

The men and women’s choruses were nicely sung during the celebrations at
the castle, such as the Per te d’immenso giubilo and D’immenso
giubilo, and they looked rather comfortable in Costume Designer Mara
Blumenfeld’s mid-19th century Victorian period outfits.

There was a lengthy delay to the start of Act Three following the second
intermission. Eventually, an increasingly impatient audience began clapping in
unison — prompting an official to come onstage and offer an explanation.

“There are many moving parts to the scenery, and we want to be sure
everything is fastened,” he announced. “Please be patient for another five
minutes.”

After an additional 10 minutes or so, a second round of unison clapping
swept across the theater until, finally, the show got underway. Good thing.
Another five minutes and 2,500 more people would have gone mad.

This review first appeared at CNY CafÈ Momus. It is reprinted with the
permission of the author.