They were supported by a strong cast, with Leigh Melrose as
Escamillo, Eleanor Dennis as Micaela, Graeme Danby as Zuniga, George Humphreys
as Morales, Rhian Lois as Frasquita, Clare Presland as Mercedes, Geoffrey
Dolton as Dancairo, Alun Rhys-Jenkins as Remendado and Toussaint Meghie as
Lilas Pastia. Calixto Bieito’s production, designed by Alfons Flores (sets,
realised by Kieron Docherty), and Merce Paloma (costumes), revived by Joan
Anton Rechi and sung in Christopher Cowell’s English translation, is much
travelled and originally dates from 1999. It sets the piece in the 1970’s in
the dying days of Franco’s regime in a place which is recognisably Spain but is
a grim marginal border region and lacking in the folkloric glamour we associate
with the work. It is a bleak, dystopic vision which worked because of the
grippingly vibrant performances which complemented the music. 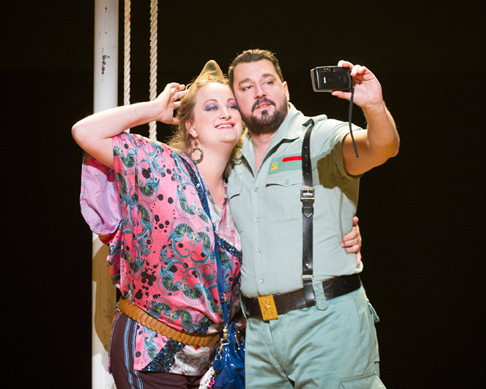 Despite including a fine article by Hugh Macdonald, the programme book
seemed entirely silent on the subject of the edition of the score being used.
We seemed to have the standard Opera Comique version, though the spoken
dialogue was cut to the bone, but it was there (I still have unhappy memories
of the Sally Potter production’s complete excision of dialogue). Dialogue and
its use, including melodrama, is an important factor in the work’s design.

This was a world of smugglers living in cars, bored soldiers being cruelly
punished, fights, violence and sex for money. No-one was admirable, Carmen
(Justina Gringyte) is clearly on the make using sex as a tool to work her way
up, you were never sure when she was playing or when she was real. Don Jose
(Eric Cutler) was a strong, silent giant who struggled with anger issues and
was clearly not the brightest penny. Escamillo (Leigh Melrose) was more a
two-bit spiv than a real super-star and very much just a local hero. It was
shocking in its way, but the miraculous thing was that Calixto Bieito staged
Bizet’s music just as it is. Unlike some productions, he did not falsify music
or plot, he found what he wanted in Bizet’s score and made sense of the
numerous little awkward moments which other directors have to finesse. It
worked, because Bizet’s music became partly the character’s inner life, the
vibrant colourful Spain which was more a concept than reality.

We opened with Lilas Pastia (Toussaint Meghie) in a dodgy white suit doing a
cheap magic trick. He was clearly something of a pimp,and Bieito made the role
both non-speaking and ubiquitous. Lilas Pastia’s bar was simply a case of drink
by an open topped car for the use of the clients of his girls, Frasquita (Rhian
Lois), Mercedes (Clare Presland) and Carmen. He cropped up at various times in
curious places, a man with fingers in pies. Each act started with a visual
gesture, Act 2 had Mercedes daughter all alone, dancing for her doll (she later
pimped for her mother). Act 3, with its huge cut out bull advert, had a naked
young man pretending to be a bull fighter. We never worked out if he was a real
one or just pretend. Act 4 opened with Lilas Pastia organising the soldiers to
dismantle the bull, ending up with him mock bull-fighting with the soldiers
carrying the head of the bull.

Things got off to a good start with a tightly vibrant performance of the
overture from Richard Armstrong and the orchestra. Throughout he kept the music
on a tight rein, giving the melodies time but not allowing things to luxuriate
too much or get flabby. This seemed to inculcate a similarly vibrant and vital
performance from his singers. Singing her first Carmen, Justina Gringyte had a
dark-toned mezzo-soprano voice with a vibrant, tight vibrato which she used to
fine effect, and an admirably flexible top. This wasn’t a relaxed, sultry
Carmen, but one who was uptight, on edge but still very sexy. Tall and slim,
Justina Gringyte used her sex appeal as a weapon. The famous numbers were
finely sung but not done in parentheses, they were woven into the dramatic
fabric. Her English was communicative and characterful, with her accent giving
her the necessary hint of otherness which Carmen needs, rather than getting in
the way.

Eric Cutler was certainly a great find. He is moving into more dramatic
territory (with Fidelio and Lohengrin coming up) and his Don
Jose had a rugged, rough-hewn quality to it but with a vitality too. This
matched the character, a tongue-tied bloke who exploded when he could not
communicate. The flower song was nicely expressive and eloquent, and Eric
Cutler knows how to shade off his voice at the top when needed. He and Justina
Gringyte really struck sparks off each other. It helped that he is tall and
well built (taller than Justina Gringyte in heels, and she is not small).

The role of Escamillo is all swagger and very little else, and here Leigh
Melrose swaggered beautifully. His duet/duel with Eric Cutler’s Don Jose in Act
3 was full of wonderful posturing and thrilling music. Like most Escamillos,
Leigh Melrose did not really have the bottom notes for the toreador’s song
though he did well (you do wonder what type of voice the first Escamillo had).
Leigh Melrose’s toreador’s costume in Act 4 did not really flatter him, but it
is a look that few baritones could bring off. 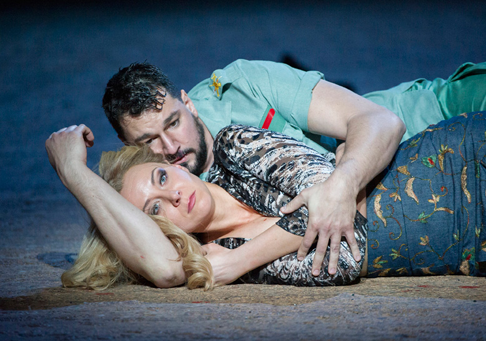 Where, I think the production slipped was in the depiction of Micaela as a
sassy but out of her depth Essex-girl type. Eleanor Dennis was convincing in
her portrayal and made a touching Micaela who showed a vulnerability in the
musical items. But the portrayal missed out on Micaela’s touching directness,
and replaced it with a knowingness. Her duet with Eric Cutler’s Don Jose was
finely done, with moments of humour, but without quite touching the heart the
way it sometimes can. But Eleanor Dennis rose to fine heights in Micaela’s Act
3 solo.

The other singers were all vivid characters in the drama with their music
part and parcel (with dialogue cut to a minimum we heard far less from some
than is usual). Frasquita and Mercedes (Rhian Lois and Clare Presland) made two
rather desperate tarts but their trio in Act 3 with Carmen was thrilling, the
two girls attitudes contrasting aptly with that of Carmen, and with Justina
Gringyte really making this count in her dark portrayal of Carmen. Graeme Danby
made a gloriously sleazy Zuniga, with George Humphreys as a handsome moral-less
Morales. Both Geoffrey Dolton and Alun Rhys-Jenkins looked their parts as
Remendado and Dancairo, but he heard little from them except their musical
characterful contributions.

The final act was brilliantly and economically staged. At the opening Lilas
Pastia drew a huge circle on the ground, suggestive of the bull ring. For the
big crowd scene, the chorus surged forward to the edge of the stage and we
experienced the parade via the music and in the reflection of their intense
reactions, In the final moments Eric Cutler and Justina Gringyte were alone, at
the centre of the circle, for a powerful and evocative ending full of
resonances.

The large chorus was on thrilling form with strong and disciplined singing
throughout and some stunning moments, It wasn’t just the big crowd scenes which
counted, but every little moment and they were firmly behind Richard
Armstrong’s tight yet vibrant account of the score. They were joined by a large
group of actors with many shirtless moments (and more), the men were generous
with their physical charms. Under Richard Armstrong, the orchestra was in
sterling form, giving a vital yet disciplined account of the score without a
flabby moment.

I enjoyed Christopher Cowell’s imaginative yet direct translation. Cowell
had found neat solutions to the stress problems caused by translating from
French,and his language was demotically direct yet poetic. Diction was
admirable throughout, this was one of those evenings when we hardly needed the
subtitles.

Ultimately this was Richard Armstrong, Justina Gringyte and Eric Cutler’s
evening, and between them they gave us some thrilling moments, in an evening of
gripping drama.