Writer James Melo
adapted Johann Wolfgang von Goethe’s novella into a series of monologues
(engagingly performed with the perfect balance of youth and gravitas by
actor Bobby Seggert) interspersed with songs from Schumann’s
Dichterliebe, sung by Sidney Outlaw, and then a mix of songs from
the German Lieder repertoire, sung by mezzo-soprano Rinat Shaham.

The evening was visually stunning, with a soft pink lighting that suggests
the pastoral love that will eventually turn to tragedy. Additionally, the
lighting team expertly executed each lighting cue. Three projections on each
side of the audience offer translations of the texts on the backdrop of
various bucolic images. While subtitles are not always an aspect to be
remarked upon, these were so astutely designed and well-executed that it
would be remiss not to mention them. The production team of The Sorrows
of Young Werther managed to cultivate the idyllic backdrop of Goethe’s
tale using atmospheric lighting, projections, and minimal set pieces. The
only main distractor was a large screen on the back of the stage on which
gritty, modern scenes of various men and women were projected, which seemed
to make very little sense in the overall ambience of the evening. At best,
these projections were confusing; at worst, they were completely distracting
from what were otherwise moments of real beauty in the show. 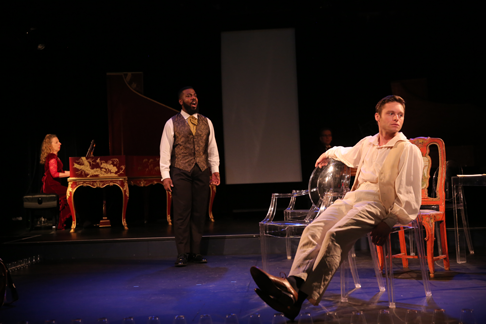 The two-hour evening flowed comfortably between Werther’s monologues and the
chosen Lieder. Bobby Seggert fluctuated between casual emoting and full
realization of his tragic situation, with a boyish charm that highlighted
the naiveté that ultimately leads to Werther’s downfall. James Melo’s
adaptation for the stage never felt tiresome, but instead engaged the
audience between moments of tranquil calm and bitter angst. Indeed, the text
adaptation held some of the strongest moments of the evening.

Baritone Sidney Outlaw is one of those consummate professionals who is an
absolute pleasure to behold onstage. His rendition of Schumann’s
Dichterliebe, carefully disseminated throughout Melo’s adaptation of
Goethe’s novella, was crisp, thoughtful, and intelligent. He employed a
gentle, intimate style of singing, until the final song when he unleashed a
rich baritone voice of impressive size and power.

Mezzo-soprano Rinat Shaham had a rich, shimmering voice that filled the
theater well. However, in contrast with Outlaw’s easy confidence, Shaham
spent the entire concert attached to a musical score on a stand or in her
hands. In the context of a chamber music concert, it normally would not be
remarkable, but some seeming insecurity with the music created moments of
tension in Shaham’s voice. She blossomed on songs with which she seemed to
have more confidence, in particular on two Liszt songs. 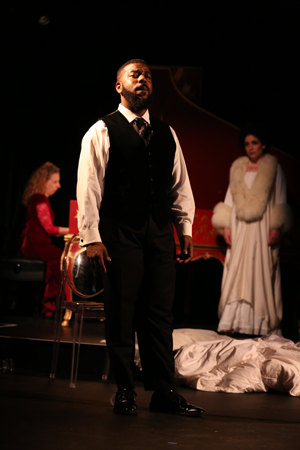 Pianists Eve Wolf and Max Barros gave beautiful performances on piano.
Barros in particular made the piano drip with beauty and elegance, with an
incomparable grace in his legato.

An evening such as this is something that needs to be done more often. The
Ensemble for the Romantic Century manages to make a chamber music concert
into so much more, adding drama, narrative, and production value that goes
beyond the beauty of an art song concert. Using the inherent drama in German
Lieder to create an evening of storytelling is a brilliant way in which to
transform the landscape of average concert-going. The Ensemble for the
Romantic Century not only does this creatively, but with nimble execution.

image=http://www.operatoday.com/RinatShaham_byJoanMarcus.png
image_description=Rinat Shaham [Photo by Joan Marcus]
product=yes
product_title=German Lieder Is Given a Dramatic Twist by The Ensemble for the Romantic Century
product_by=A review by Alexis Rodda
product_id=Above: Rinat Shaham