This summer the festival is offering an enjoyable and compelling production of Mozart’s Le Nozze di Figaro, which
demonstrates not just the enduring beauty of this evergreen opera, but the high quality of young singers available to sing it today.

The cast was headed by three uncommonly large-voiced Mozartians. Jonathan Lasch, a burly bass-baritone who has trained in numerous young singers’
programs, sang a lusty, heavy-weight Figaro. His best moments came in Act IV, when he relaxed and demonstrated more vocal colors. Baritone Sean Anderson
brought similar vocal force to the role of Count Almaviva, making much of his angry Act III aria. The rest might have profited from a bit more aristocratic
restraint. 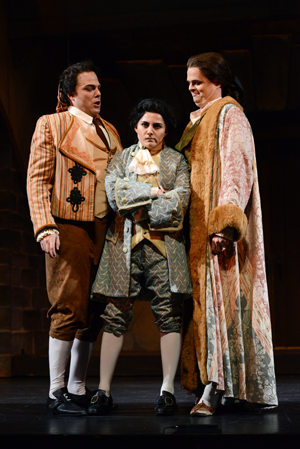 Canadian soprano Katherine Whyte portrayed the Countess Almaviva as a deeply passionate woman. She demonstrated a keen artistic sensibility throughout, for
example with lovely pianissimo phrasing in the second verse of “Dove sono.” Still, the sustained notes in her two big arias cruelly exposed a
wobble in the voice—which disappeared, however, in ensembles and swifter passages, where she was uncommonly dramatic. Overall, one wonders if Whyte
is a budding spinto who has outgrown this role.

Another bit of slightly problematic casting is Haeran Hong, a Korean-born Juilliard-trained soprano who won the Queen Elizabeth competition in 2011, as
Susanna. To be sure, hers was a polished performance from an artist who is going places. She sang precisely and tastefully: I particularly liked the
delicately interpolated B-flat at the end of “Deh vieni.” She looked lovely and acted sympathetically. That being said, the lighter weight and
coolly metallic edge of her voice betrays a lyric coloratura or “soubrette”, rather than a warmer lyric soprano for which the role of Susanna
was written. For me, this type of vocal mismatch undermines both characterization and ensemble.

A worthy audience favorite was 25-year old Mexican Cassandra Zoé-Velasco, who already has a career well under way. She possesses a mezzo voice with
real color and depth. She phrased with mature artistic sensibility while believably portraying Cherubino as an awkward adolescent. 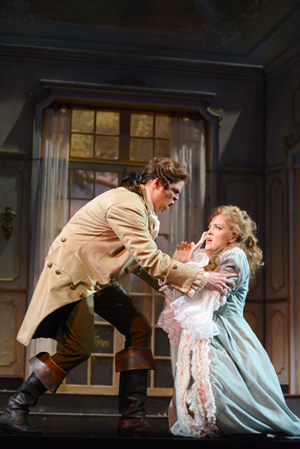 Sean Anderson as Count Almaviva, Katherine Whyte as the Countess

The rest of the cast was solid down to the shortest role. Two veterans, American Katheryn Krasovec and Puerto Rican Ricardo Lugo, memorably assumed the
roles of Marcellina and Bartolo. Both are fine singing actors, with Krasovec’s Marcellina in particular making much of her character’s
humanity, while remaining genuinely funny. Jessica Beebe, a doctoral candidate at Indiana with a lifetime of experience as a young choral soloist, made the
most of Barbarina’s half aria. David Kellett, Studio Instructor on the Princeton faculty, lacks the extra bit of edge one has come to expect in the
character role of Don Bazilio and he transposed some words, but he acted and sang well in this character’s insinuating asides. Paul An, a versatile
young American bass, and Vincent DiPeri, a musical theater singer trained at the local Westminster Choir College, turned in creditable performances as
Antonio and Don Curzio.

The greatest room for improvement of this production during the run, I believe, lies in the conducting. On the plus side, conductor Richard Tang
Yuk’s conception of Mozart is smooth and unfussy. Conducting one or two beats to the bar, he quickly established the elegant flow that is a hallmark
of fine Mozart operatic accompaniment—yet is often absent from performance-practice renditions. The ensemble was tight, with only a few opening-night
bobbles.

On the minus side, Yuk’s dynamics remain rather unvaryingly and unnecessarily loud, given the small size of the pit band—a quality even more
distracting in a hall ill-designed for opera. It is easy to forget that in this opera Mozart specifically marked most non-choral numbers and almost all
vocal entries piano, with forte employed almost exclusively only for occasional emphasis, climaxes, and choral numbers. In the few
moments when the scoring forced the orchestra down to a steady piano (e.g. “Voi che sapete” and “Deh vieni”), it was as if
a sonic scrim had lifted and the singers could reach over the orchestra and touch the audience directly. Lower volume, combined with a warmer more yielding
orchestral timbre and a bit more rubato, might also encourage the young singers to take the edge off of what was (despite slow tempi) a needlessly
boisterous account and, rather, to highlight the elegant vocal colors and subtle Italian wordplay so central to this opera. 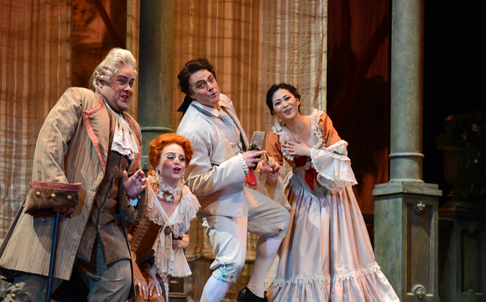 The hyper-traditional and realistic stage design by Peter Dean Beck was so pleasing to the eye that it elicited audience applause. Stephen LaCosse’s
direction, while largely following time-tested formulas, included at least one original idea borrowed from Rosenkavalier: Marcellina, Cherubino,
Susanna and the Countess (as well as Don Basilio!) each looked into a hand mirror and all saw the different things that the passage of time had wrought. A
few other notions were misconceived: for example, no matter how much of an impulsive teenager he is, Cherubino would never reach up and grab the
Countess’s face, while, for her part, the Countess would surely take the Count’s arm in public, if only to save face.

The opening night performance I attended was sold out, and the audience gave a standing ovation. This worthy production returns for Sunday matinees on June
21 and 28.