Alas, an imposing set both realizes his basic premise and
physically restricts its development. It was left mostly up to the cast to unfold Verdi’s unique brand of widescreen but searchingly intimate drama.

At its unveiling, the forbidding set, encrusted with World War I mud, lowered the atmosphere to a macabre chill. After all, Il Trovatore is also a
ghost story. As the captain of the guard tells us, the old gypsy, burned at the stake for witchcraft, literally haunts the castle where the soldiers are
garrisoned. The soldiers sat on fire-lit slabs, which were soon revealed to be parallel rows of square pillars that could be raised up in the air or sunk
into holes in the ground. They reconfigured to represent trees, graveyards, trenches and, cleverly, the prison-tower in Act IV. Combined with the
time-stamped costumes, the grim pilasters created resonant images, even suggesting genocidal graves while the soldiers baited Roma for sport. The
historical parallel with Gutiérrez’s nineteenth-century play, the source for the libretto, was intentionally disturbing. Mirror-lined walls reproduced
the pillars endlessly, just as the gypsy’s fate replicates itself through intergenerational hatred. Theoretically ingenious­—in practice,
however, the pillars and wells inhibited the singers’ movements and turned them into tableaux figures. The initial visual impact was watered down by
persevering darkness and the upstage mirror unwittingly placed the conductor on the stage. This problem could be solved before the production visits its
co-parent, the Paris Opera, next year. Trickier are the unsightly wires trapping the performers whenever the pillars are lowered to ground level. 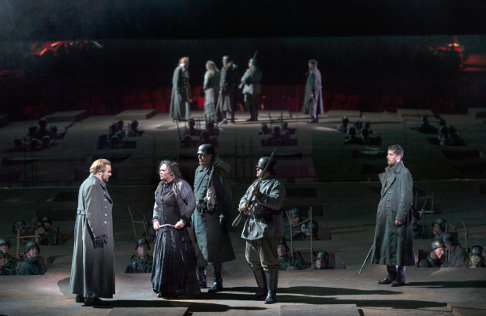 Fortunately, the success of this work chiefly depends on the singers, and this cast has the right Trovatore stuff. This was not a night of strict
bel canto observance and vocal grandstanding. Cabalettas and strettas, the short, fast arias expressing urgent resolve, were not repeated. Interpolated
high notes were hit but not sustained. In his letters, Verdi repeatedly expressed a preference for singing with theatrical heart and soul over technical
prowess, but this cast delivered plenty of both. That most of them are native Italian speakers with a natural linguistic cadence was a plus.

Bass Roberto Tagliavini sang Ferrando’s fright-night narrative elegantly, with clean sixteenth notes and lip-smacking relish. In fact, his whole
performance was praiseworthy. His commander, Simone Piazzola was a rare Di Luna who did not run out of breath in the Act I jealousy trio, unspooling
effortless, bronze-coloured lines. Mr Piazzola’s voice may not be a Sherman tank (or, since this is the Great War, a Liberty tank), but it is free of
the bluster that sometimes comes with larger voices. Carmen Giannattasio was his erotic obsession. Dressed and coiffed severely, she gave us a confidently
sung Leonora. The thick cream of her middle voice was highly gratifying and her flint-edged top notes proclaimed that this Lady would stop at nothing to
save her troubadour. In her how-we-met aria, “Tacea la notte placida”, Ms Giannattasio missed a rung or two on her runs, but she was both
technically steadfast and moving and in her long Act IV scene, adding a beautifully chiselled cadenza to her aria.

As the traumatized gypsy who haplessly burns her own baby while trying to avenge her mother, Violeta Urmana plumbed the depths of Azucena’s music
with shuddering power. Her upper register now has a wild vibrato, but there was no ducking her vocal and theatrical dominance. Her high B-flats were
half-sung, half-screamed, but one-hundred-percent petrifying. She hallucinated stupendously in the dungeon scene and sang hauntingly in her duet with
Manrico, which exploits the most luxurious segment of her voice. Equally golden in this duet was Francesco Meli, who brought a thrilling mix of radiance
and red-bloodedness to the title role. Mr Meli’s voice is hefty enough to handle the big, swaggering moments, but the noble colour of his tenor
blooms best in lyrical music. Fervent applause followed his affecting wedding night aria, “Ah sì, ben mio, coll’essere”. 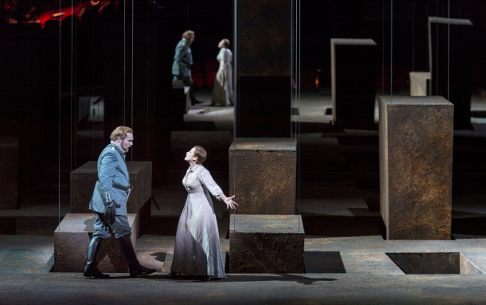 Antonio Lozano was a shaggy-locked and –voiced Ruiz and Peter Arink made the most of the Old Gypsy’s few lines. Florieke Beelen sang Ines,
Leonora’s lady’s maid, with glass-bell clarity. Maurizio Benini led the Netherlands Philharmonic Orchestra with fleet tempi alternated with
slow-and-gape braking. Crucially, the orchestra never submerged the singers, and one assumes that the few muddled cues and tempo distemper will disappear
during the run. However, both the orchestra and the Dutch National Opera Choir are capable of subtler shading and articulation and should have been
utilized beyond mere competence level. But the singing was in capable hands, and, in the case of Il Trovatore, that spells victory.