Opening October 10th, it features striking performances by acclaimed baroque specialist William Christie and his Les Arts
Florissants and super-star counter-tenor Philippe Jaroussky, Handel certainly is worthy of this prime-time treatment and it is already a highlight of the
new season.

With the coming holidays, Americans can hear Handel’s Messiah almost everywhere: in concert halls, churches, shopping malls and even elevators. In
my youth, I assumed he was a one-hit composer (well, two counting Water Music). I knew he had a long life and continued to compose until the end
but always assumed that the “powers that be” knew that his other works deserved no particular attention. 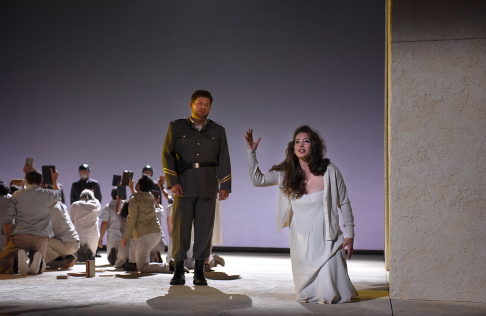 In recent decades, however, this has changed for me and many others. Imaginative stagings and the Baroque revival, featuring music played on
historically-informed instruments, have given new life Handel’s many operas and oratorios and also revived interest in a large number of other
long-forgotten composers. William Christie and his forces have already successfully staged this oratorio in Glyndebourne in 1996 with a popular and
provocative staging by Peter Sellars. Christie recorded the work in 2000 and now opens the Théâtre des Champs-Élysées season with it.
The oratorio tells the story with such detail that the border between opera and oratorio seems to have disappeared. The new production, also “modern
dress,” focuses on the cast and chorus to clarify and ennoble the music of this tragic tale.

The British stage director Stephen Landridge, the new director of the opera of Göteborg, tells the story of Handel’s penultimate oratorio with a
refreshing directness and clarity. Movable walls, which change color from the lighting, frame the action and the choir, often onstage, represent the
public. The story of Roman legions moving against a Christian community in ancient Antioch features a young centurion who falls in love with a chaste,
newly-converted Christian. When Roman forces move against the upstart “sect,” the conflicting emotions of the young officer, Dydime, sang with
poise and arching beauty by Philippe Jaroussky, become central to the story. 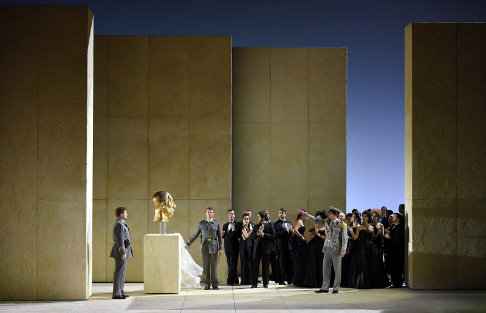 In the title role, soprano Katherine Watson began appearing in public as part of Christie’s Jardin des Voix program for young singers in 2008 and,
after appearing in several productions under his wing, is ready for the international stage. A voice which combines strength and shape, her Theodora has
serious dramatic impact and beauty. Her friend and confident, Irène, sung by Stéphanie d’Oustrac, is also carefully realized and
beautifully sung. d’Oustrac also began her career with Christie and now has a serious international career. A vibrant artist of sound, her
performance compliments Watson’s engaging Theodora.

The Roman officer who tries to save Theodora, Didymus, was sung by the celebrated counter-tenor Philippe Jaroussky. While the voice seemed to have a bit
less impact that in the past in this same theater, it retains the superb grace and beauty which took him to the top. This and his instinctive theatrical
sense make him appealing as the Roman officer who questions the authoritarian state. As Valens, the Roman commander demanding obedience, bass Callum Thorpe
performs with much barking and an often-distorted melodic line but the audience seemed to like his portrayal. Tenor Kresimir Spicer is more engaging as
Didymus’ friend, Septime. One little complaint would be that the English text could have been more accurately expressed by the entire cast.

It is a tribute to William Christie’s decades of work in France that a Handel opera can open a season with five performances and have capacity
audiences cheering. Some time ago there was an internet discussion of whether Handel should be considered at the level of Beethoven, Bach or Mozart, the
top ranking of the pantheon of classical composers. The overarching beauty and brilliance of Theodora and its message of universal love and hope makes the
case that Handel’s music for voice is a universal treasure that all music-lovers should well know.