Seated at a grandiose table, a black silhouette, swirled in mist, is
suddenly illuminated by blazing white light, next framed by a towering
triangle of light whose tip points upwards like an aspiring cathedral tower
(lighting design by Tim Mitchell). But, we are in a world wrenched by
violence and chaos, and the Church will offer no consolation or salvation.
Bieito’s milieu is Spain, during the Civil War: the only brief
flashes of colour are provided by the waving of the red-yellow nationalist
flag and the shedding of blood.

It’s also a world that Bieito feels close to: born in northern
Spain’s Miranda de Ebro in 1963, Bieito tells us, in a programme
note, of his grandmother’s stories of ‘shots being fired behind
the cemetery walls as she lay in her bed at night […] every morning
she would be greeted by the same scene: a pile of dead bodies in the
forecourt by the wall’. Her ‘terrible stories’ are
invoked by the production’s visual imagery. Upon the white, balconied
façades which border the public square — then swivel, slide and
tilt to form depressing back-alleys and fire-escapes — contemporary
newsreels of marching armies, public protests and the wailing distress of a
dying child are projected. Alongside them, Picasso’s icons of pain
and anguish tell their own story: agonised faces, severed limbs, gaping
wounds, a horse falling in agony, the bare lightbulb of a torturer’s
cell (video designs by Sarah Derendinger).

Updating Verdi’s opera to the years of the Spanish Civil War makes
sense. Both Picasso and Verdi employ a big canvas; and, the cover-image of
the ENO programme — a sword up to its hilt in blood and casting a
crucifix-shadow on an ochre wall — may allude to the toxic tensions
between the Catholic hierarchy and the Republic, and the Church’s
role in adding fuel to the flames when conflict broke out.

But, the drama of Verdi’s opera hinges on the private and not the
public world; specifically the triangle formed by Leonora, her beloved
Alvaro, and her vengeful brother Carlo di Vargas. Here, Bieito’s
touch is less sure. The static nature of the thought-provoking images he
and his designer, Rebecca Ringst, present ultimately hinders the dramatic
currents that Verdi’s score articulates. We are presented with
photographic snap-shops but these do not come alive to form a tragic
narrative. The ENO chorus, in tremendous voice, stand and deliver. Even the
principals seem barely to communicate; all the relationships are
dysfunctional. In the opening scene Leonora and her father, the Marquis of
Calatrava, sit at the table, immobile, paralysed by patriarchal disapproval
and oppression. During the impassioned duets — for Alvaro and Leonora
in Act 1, and Alvaro and Carlo in Act 3 — the protagonists’
emotions are sung but not dramatized.

There are no assassins from whom Alvaro may rescue Carlo. And, there is
no sign of army life or military action. When Alvaro sings of his misery in
his Act 3 aria, ‘La vita è inferno all’infelice’, he
appears, not among his fellow troops but poking through, and isolated by,
the gaping window of one of the sloping façades. He is later joined,
in another window frame, by the surgeon — whose white apron might
have been stained as much by blood from the abattoir as from the
battlefield. The only thing that moves is the scenery: and even this
paradoxically hindered the momentum when, after Carlo and Alvaro had dashed
off to fight their duel, a lengthy pause intervened as the stage-hands
struggled to re-position the façades, forcing Leonora to put her great
prayer for peace, ‘Pace, pace mio Dio!’, on hold. 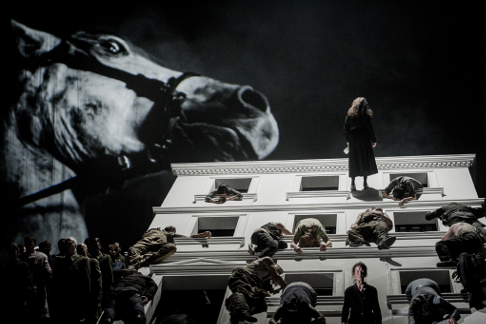 Scene from The Force of Destiny

The significance of some of Bieito’s smaller gestures was not
immediately fathomable. Why, when she crouches over her father’s dead
body in the opening Act, does Leonora remove his belt? What does the image
of a girl scribbling on a blackboard — which is projected onto the
front-cloth during the second interview — portend? On the other hand,
the symbolism of some motifs is heavy-handed: Don Carlo’s Act 2 aria,
in which he pretends to be a student from Salamanca named Pereda, was
‘sabotaged’ by the noisy shredding of books by the peasant
crowd — an allusion, one presumes, to the burning by Franco’s
troops in 1939 of the entire library of Pompeu Fabra, who had dedicated
himself to the study of the Catalan language — an act of cultural
vandalism which was accompanied by cries of ‘Abajo la
inteligencia!’ (Down with intelligentsia!)

The directorial gestures leave us in no doubt, though, of the cruelty of
the world depicted. In Act 3, Preziosilla’s ‘Rataplan’
hymn of praise to military life becomes an incitement to brutality: the
soldiers oblige by executing some of the starving refugees, while
Preziosilla indulges her own bloodlust by savagely kicking a pregnant
woman. Fra Melitone’s chastisement of their godlessness feels
ineffectual and impotent in the face of such depravity. On becoming a
hermit, Leonora is crowned with a barbed wire laurel — with which she
later chokes herself.

If the human relationships between the protagonists interest Bieito less
than abstract notions of fanatical hatred and passion, then the singers
still create compelling portraits. As Alvaro, Gwyn Hughes Jones
demonstrated a gallant Verdian power: in Jeremy Sams’ rather clunky
and mundane translation, Alvaro sings of a ‘fiery beacon’ and
‘glory and splendour’ in his Act 1 aria, apposite terms for
Hughes Jones’s vocal heroism. However, it didn’t always feel
comfortable: he reached the top, but the effort required was evident, and
Hughes Jones’s tone and intonation lost focus in some of the quieter
passages.

Anthony Michaels-Moore convincingly portrayed Carlo’s bitter,
obsessive vengefulness. This was a well-judged performance: Michaels-Moore
took command of the stage at the start of Act 4 when Carlo forces Alvaro to
fight. Throughout he used his baritone expressively, and employed a range
of colours which conveyed Carlo’s private torments.

The real star, though, was American soprano, Tamara Wilson, making her
role debut as Leonora and her first appearance in the UK. She has a
magnificent voice, a gleaming lirico-spinto which can soar with enormous
power at the top but which also has richness, depth and hints of darkness
at the bottom. Able to modulate the dynamics with sure control, Wilson rode
the dramatic climaxes with ease, effortlessly ascending above and cutting
through the orchestra. Her intonation was unfailingly true, and in Act 1
Leonora was tender and vulnerable. Wilson brightened her soprano in the
monastery scene, floating above the monks’ chanting, perhaps
intimating hope; but she saved her best for a resplendent ‘Pace,
pace, mio Dio!’ in the last Act. 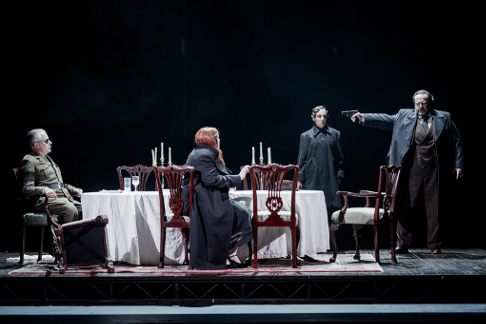 Rinat Shaham’s Preziosilla was feisty and vivacious, and Andrew
Shore — who is coming to the end of his run as Bartolo’s in ENO
Barber of Seville — swapped comic foolishness for
ecclesiastical menace and, as a petulant Fra Melitone, found some
surprisingly dark baritonal tones. He was effectively complemented by James
Cresswell’s mellifluous and well-projected Padre Guardiano. Replacing
the indisposed Matthew Best, Robert Winslade —Anderson sang the short
role of the Marquis of Calatrava with a firmly supported bass-baritone;
when accidentally shot by Alvaro, he slid with impressive melodrama to the
floor, dragging table-cloth and candelabras with him.

Conductor Mark Wigglesworth chose to perform Verdi’s original,
shorter Overture. During the evening, he drew playing of tremendous vigour
and strength from the ENO orchestra, moving swiftly through the score
— sometimes thwarting the audience’s desire to applaud
individual arias — and injecting momentum which went some way to
compensate for the lack of movement on stage.

Overall, Bieito presents many arresting moments but they are not
connected by a sustained dramatic thread and this weakens the impact of the
score’s own dramatic persuasiveness. The director cites Antoine
Saint-Exupéry: ‘Civil war is not war, but disease. The enemy is
internal, people fighting themselves.’ Perhaps that is why Bieito has
decided that Leonora should take her own life, rather than die at the hands
of the mortally wounded Carlo who, in Piave’s libretto, stabs her as
bends over his body. But, in so doing — and though Carlo sings,
‘I am weary of this struggle with fate’ — Bieito denies
us a revelation of the tragic force of destiny.