Though the story remains faithful to the well-known and oft-interpreted
Cinderella story, Company XIV dazzles the audience with novelty from every
angle. The dancers move with the grace of trained ballet dancers while
seamlessly shifting to modern dance, propelling their sculpted bodies in
rhythmic thrusts. There’s the nod to the traditional movement of the court of
Louis the XIV, particularly in the courtly scenes of the Prince’s ball, but
only for a moment, after which the party devolves into a series of
hypersexualized dance duos.

What’s most satisfying about it all, especially for the opera aficionado,
is that it works. Of all the recent attempts to bring opera back into
relevance or to recapture the excitement, sensuality, and titillation opera and
ballet held for audiences in the Baroque Era, this production is the most
successful. It combines sex with beauty, novelty with tradition, and never
feels like an unconvincing effort to innovate innovation’s sake. It
is sexy, it is innovative, and yet it’s still just the same
fairy tale of Cinderella—except the audience is thrown between ecstasies of
laughter, fascination, and confusing sympathies with characters usually given
perfunctory depictions. 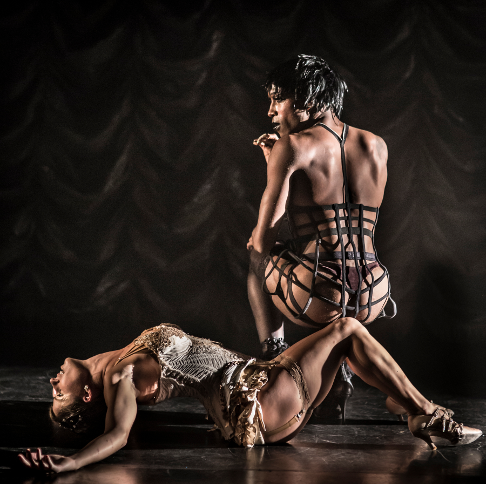 The true queen of the stage is Davon Rainey, playing the part of
Cinderella’s Step-Mother. He manages to portray the fragility of a woman
fearing the passing of time and the loss of her own beauty, while instantly
snapping to a cruel, vindictive version of the classic evil step-mother. He
sashays around the stage with equal parts feminine sexiness and masculine
vitality, his body firm and robust with every sharply executed bit of
choreography. The oscillation between the longing between hope for the success
of her daughters combined with her own secret desires to retain her youth and
sex appeal causes the Step-Mother to become one of the most compelling
characters in the show. The final moment of Rainey strutting across the stage,
staring concernedly into a mirror, with Cinderella dutifully at her side, is
one of the most devastating and moving moments of the show. No longer a
confusingly abusive foster mother for Cinderella as in the classic tale, the
Step-Mother evokes simultaneous sympathy and disgust. Rainey inhabits this
complex interpretation perfectly, bursting with an aggressive sexuality
that’s both titillating and tragic.

Austin McCormick’s choreography is rife with symbolism and teeming with
creativity, with profound commentary on not only the story of
Cinderella but greater issues of heteronormative relationships and
gender as a social construct. Cinderella (Allison Ulrich) spends the first half
of Act I on her hands and knees into total servitude to her step-sisters (who
first appear in a comedic, German cabaret-style entrance, the first of many
brilliant syntheses of historical musical periods and art forms dreamt up by
McCormick.) Ulrich spends most of Act I scurrying around, mouselike, as
Cinderella endures abuse and ridicule by her step-mother and step-sisters, used
by them as a literal footstool as the trio cackles their way through excess and
frivolity. With Cinderella on her hands and knees, her step-sisters (Marcy
Richardson and Brett Umlauf, two opera singers with bright and lovely sounds)
sing joyfully of their enjoyment of the finer things in life, with a version of
Lorde’s pop hit “Royal” so seamlessly rendered into
classical-sounding duet that it took me a moment to register what was
happening. 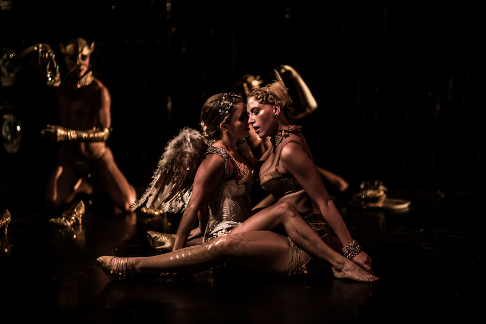 Katrina Cunningham (The Fairy Godmother) takes the stage by storm with a
husky-voiced rendition of Lana del Ray’s “Born to Die,” and proves in a
few fluid movements that she’s there not just to sing, but to dance. As a
younger, sexier interpretation of The Fairy Godmother, she embraces Cinderella
in an unforgettable dance duet that fluctuates between a struggle for sexual
power and a sensual display of lovemaking. The duet leaves the atmosphere
uncomfortably erotic right before the first of the “drink breaks” that
broke up the acts of the evening. McCormick, seeming to never forget a thread
in the story he’s weaving, allows The Fairy Godmother one last longing glance
at her protÈgÈ, Cinderella, as she winds her body with the Prince in a
display of consummation of their love at the end of Act III.

Ulrich takes the traditionally innocent-minded Cinderella and gives her a
trajectory into truly realized womanhood during Acts II and III, her hair loose
and her body open in acceptance of the Prince’s desires; the Prince, played
smarmily by Steven Trumon Gray, croons beautifully before pulling himself up
for a dance into the suspended ring, just in case the audience thought those
rippling muscles were just for show. Richardson, Umlauf, and Rainey appear and
reappear like mirages throughout the ball and the search for Cinderella, their
antics to ensnare the Prince’s affections culminating in The Jewel Song from
Gounod’s Faust. Sung beautifully by Marcy Richardson, this feat of physical
and musical skill has to be seen to be believed. The ensemble struts across
stage with large black narration cards, when they’re not busy dancing with
finely executed fervor across the stage.

Company XIV’s production of Cinderella is a true modern
Gesamtkunstwerk. No detail is left unforgotten, from the careful
bedazzling of the Louis XIV-style dance shoes to the final spotlight on
Cinderella, a fairytale maiden who learns that all dreams must end.