Engelbert Humperdinck’s librettist and sister, Adelheid Wette,
dethorned the story of Hansel and Gretel as much as she could, making the
murderous parents fallible but caring, and dispatching fairy creatures to watch
over the lost siblings. The witch is still a cannibal, but she is the single
embodiment of danger. Even the hunger beast is tamed early on, when the father
comes home laden with groceries after some lucrative broom-selling. Director
Lotte de Beer puts the scariness back in by turning the tale into the escapist
fantasy of a group of street children who scurry around a refuse dump like
vermin, sniffing glue. Instead of angels, they dream of parents tucking them
into soft, clean beds. They are terrified, not by the subconscious fear of
abandonment and parental infanticide, but by real dangers—neglect,
indifference and abuse. Ms De Beer’s concept indicts the world for
failing to protect so many of its young while celebrating children’s
imagination and resilience. 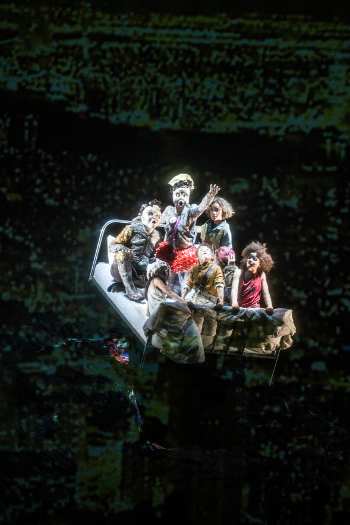 To escape their harsh existence, the street children turn cardboard boxes
into doll’s houses and fashion figurines out of earth and litter.
Stage-wide video projections zoom in on their busy hands. The figurines become
the singers, starting with Hansel and Gretel in a giant corn flakes box. It
takes a while to get used to the singers’ latex masks and lumpy costumes.
However, with regular reminders of the child puppeteers, the Hansel and Gretel
“dolls” grow more affectingly human in each consecutive scene. Sets
and costumes, fabulously lit by David Finn, combine the magical with the
sinister. The midden in Act I provides the plastic debris for a colourful
streamer forest. It is then transformed into a glistening mound of candy
wrappers in lieu of the gingerbread house. The closer the children get to the
Witch’s cottage, the prettier their surroundings become, and the more
ominous. The Sandman’s dream dust is a crushed Valium pill. As the
feathered Dew Fairy, he puts on a menacing, skeletal bird’s head. His
motive for drugging the children is revealed when he turns up at the
Witch’s cottage as her accomplice. Conductor Marc Albrecht ratcheted up
the horror with a dungeon-dark take on the score. He consistently gave dusky
orchestral colours the upper hand, with ravishing results, and expanded the
symphonic breadth of the music as far as it can go. The Witch’s Ride was
so ferocious, it sounded like a full-blown Witches’ Sabbath. He also
created moments of hushed, spacious lyricism, most notably during the Evening
Prayer. The Netherlands Philharmonic was in wonderful form, alternating
full-force mettle with glowing transparency. 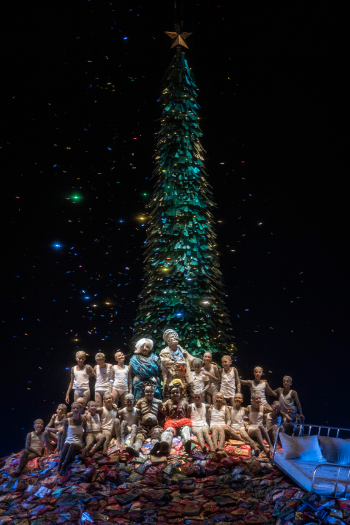 The singing was equally gratifying, although the sets, with no backdrop or
flats, did not favour the lighter voices. Both Lenneke Ruiten as Gretel and
Kate Lindsey as Hansel were at times upstaged by the orchestra. Ms Ruiten was
pitch-secure and vocally spry. Moving with splay-kneed bravado and singing with
unfailingly beautiful tone, Ms Lindsey made a delightful Hansel. Charlotte
Margiono’s Mother sounded steadiest and roundest in the lower range.
Perhaps restrained by the concealing costume and blank-faced mask, Ms
Margiono’s performance was less animated than her previous roles. As her
husband, Thomas Oliemans was vocally impressive, full of zing and swagger, and
with pin-sharp enunciation. A few phrases in the role require a bigger
baritone, but Mr Oliemans wrapped his voice around them intelligently.
Hendrickje van Kerckhove sang the Sandman and Dew Fairy with dream-like clarity
and the children’s chorus was very well-rehearsed. Peter Hoare’s
meaty tenor served the Witch well, but was challenged at the upper and lower
limits. Although sung conventionally in comic character tenor vein, this Witch
was truly unnerving, not for preteens and teens perhaps (this production is not
suitable for young children), but for adults aware of “what’s out
there”. The Witch was not a clay doll, but a real person, a bare-chested
man in a Goldilocks wig and a frilly vaudeville costume; initially a ridiculous
creature, but soon emerging as a sexual predator with a basement full of
traumatized children. At this moment, it becomes clear what the elaborate
construction of cardboard edifices, fantasy scripts and puppetry were all
about—the exorcism of this evil by burning the Witch and unlocking the
basement. The festive happy ending is all the more touching for having been
imagined in such wretchedness.