Sexual infidelity and vigilante justice are at the heart of both operas.
Michieletto entwines the works even more tightly together by setting them in
the same late twentieth-century south Italian backwater, and by allowing the
characters to wander between the two dramas. So, during the impassioned
intermezzo of Cavalleria we see an assistant at the baker’s shop
— on the walls of which Beppe has posted bills for the forthcoming
performance of Pagliacci — tentatively approach a stylish young
woman, proffer a gift, a silk scarf, and snatch a hasty embrace. Later, we
understand that this was the first romantic encounter of Silvio and Nedda,
whose illicit love will bring heartbreak to the commedia troupe in
Pagliacci. Then, the equivalent instrumental interlude in
Pagliacci witnesses the emotional reconciliation of the now-pregnant
Santuzza with Turridu’s bereaved mother. 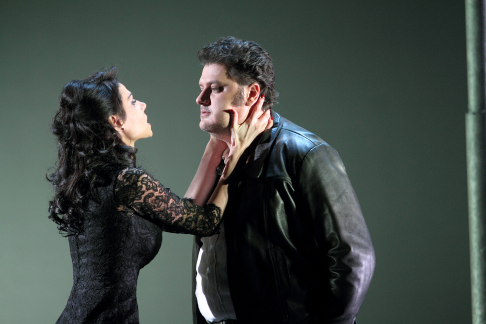 Martina Belli as Lola and Aleksandrs Antonenko as Turiddu

I’m not sure that such interlacing achieves much. Moreover, there is
other directorial meddling that I found downright distracting, such as the
presentation, in the form of a tableau, of Cavalleria’s final
scene during the opera’s overture. The curtain lifts to present a prone
figure in a shabby piazza, gloomily lit by the dull beam of a single lamp-post.
Then, the bereft matriarch, Mamma Lucia, fretfully pushes her way through the
shocked crowd of onlookers, discovers her dead son, and mimes an agony of
bereavement as his body is borne away, aloft, to the strains of the Easter
hymn. Given that so little actually happens in the course of the opera, and
that the drama relies on the ratcheting up of the tension between the ill-fated
lovers, does it make sense to give us the tragic ending before we’ve
started?

Perhaps it explains why the entire action of Cavalleria seems to
take place at night, though: we are in the shadow of death? The set
doesn’t help to create a sense of forward momentum either, consisting as
it does of a shrub-lined piazza and a run-down Panificio which
revolve, unceasingly, transferring us back and forth, between the shop’s
interior and exterior. Earlier this year, I noted that designer Paolo
Fantin’s set for Michieletto’s Tell was dominated by a
huge, uprooted tree, ‘horizontal and enlarged, its twisting branches and
gnarled roots etch and score sharp gothic shadows onto the bare skies
beyond’, which despite its visual impact was ‘a hindrance to
movement … the fallen trunk can revolve to reveal different locations but
there is little meaningful choreography within those locations’. The same
might be said here of Fantin’s bakery which, though characterised by
evocative period detail, limits the stage space available for the Chorus.
Michieletto does little with the latter, in any case. 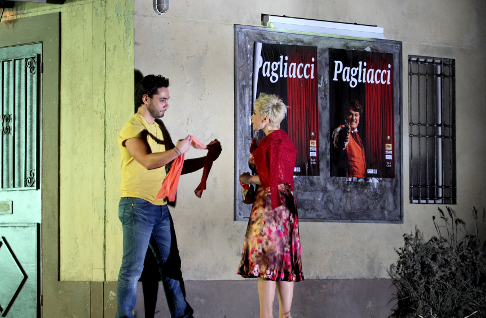 Dionysios Sourbis as Silvio and Carmen Giannattasio as Nedda

The design of Pagliacci re-configures the revolve into a simple,
and much more successful, arrangement of interlocking walls which make up
various rooms within a ramshackle community centre: the troupe’s dressing
room, a bare hall and the auditorium itself. During the commedia performance,
Michieletto cleverly highlights the theatre/reality dichotomy by using
‘doubles’ to step into the action on stage, while the
‘real’ protagonists step behind-the-scenes and Canio is taunted by
Tonio and Nedda (as Taddeo and Columbina) in his dressing-room. The stage upon
which they perform is ridiculously small too, adding to the sense of discomfort
— the passions enacted are too vast to be squeezed onto the tiny
platform, and the red of the proscenium frame is a like a bloody gash, a sign
that carnage is inevitable.

The performers, on stage and in the pit, gave a truly persuasive account of
both operas, but it was Pagliacci which saw the singers shine
brightest. Aleksandrs Antonenko was a hard-hearted Turiddu — I
couldn’t believe in his appeals to his mother to watch over Santuzza
should anything happen to him — but his voice was warm and ringing, if a
little insecure at the top. The role of Canio suited him better and, driven to
near madness by Nedd’s refusal to name her lover, he gave an intense and
emotionally wrought rendition of ‘Vesti la giubba’, forcing himself
to prepare for the performance ahead. This was a high-point of the evening;
here, the despair was absolute and genuine, reaching out to us beyond
Canio’s twisted malice.

Dmitri Platanias, one of two Greek baritones in the cast, doubled as Alfio
and Tonio. The former role did not ask much of him: returning from the
‘open road’, he lifted the boot of his battered Fiat and showered
the expectant villagers with faux designer handbags and the latest fashions,
picked up on his travels; but otherwise this Alfio did not always seem entirely
engaged in the drama. However, as Tonio, Platanias’s baritone acquired
fullness and suavity; the prologue of Pagliacci was riveting from the
first, and he introduced nuances to his voice that had been absent in
Cavalleria. 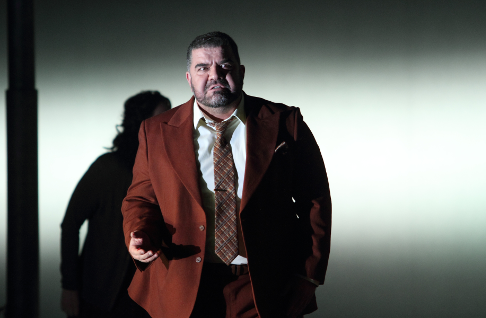 Eva-Maria Westbroek was vocally fervent as the emotionally and
morally tormented Santuzza, and gave her all dramatically; but, Westbroek used
an overly wide vibrato to beef up the sound which at times affected the
intonation — her duet with Alfio was particularly askew — and the
soprano’s tone lacked a consistent glossiness and ripeness. Martina
Belli, making her ROH debut, was a glamorous Lola debut, sparkling with cruel
insouciance. Mezzo soprano Elena Zilio was affecting as Mamma Lucia; despite
her stern façade, her devotion to her son was ever apparent — though
her histrionics in the overture seemed out of keeping the strict self-control
this matriarch exhibited elsewhere.

In Pagliacci, Carmen Giannattasio was superb as Nedda: the beauty
of her voice was tinged with a slight steeliness, capturing Nedda’s
allure and capriciousness. British tenor Benjamin Hulett (Beppe) and
Platanias’s compatriot Dionysios Sourbis (Silvio) completed a fine
cast.

Antonio Pappano may have been born in Epping and lived in the US, but his
family roots lie in southern Italy, and here he showed that he has this music
in his blood. In a recent interview in the Guardian, the conductor
emphasised his commitment to these operas, despite their melodramatic
clichés: ‘all those clichés are genuine. Go to Italian villages
even today and you’ll still see the old women dressed in black and the
villagers will look at you differently if you are a stranger. The Madonna being
carried in the parades at Easter might look corny on stage, but it is not an
invention. It happens. And while some of these images are easy to poke fun at,
they are also compelling and authentic, especially in the south.’ And,
Pappano drew an impassioned and unstinting performance from the ROH orchestra.
Most notably, he underlined the score’s juxtapositions of softness and
sentimentality with malevolence and viciousness, switching between the two with
unnerving volte faces which helped to convey the volatility and
impulsiveness of the lovers. Violins, flute and harp created sweetness but were
repeatedly swept aside by the cello’s darkness. The ROH Chorus was in
resounding voice, too, and the Easter Hymn swelled gloriously.

Michieletto ensures that both operas make an immediate emotional impact, but
it is in Pagliacci that the melodrama builds with excruciating
inescapability towards its murderous final moments. Canio’s closing
words, ‘La commedia è finita!’, were chilling, just as the
psychological drama presented was horrifically real.