Benjamin Britten’s first Canticle, My beloved is mine,
combines theatrical impact with divine reflection. When it was premiered in
November 1947 by Britten and Peter Pears at a memorial concert for Dick
Sheppard, the founder of the Peace Pledge Union, the composer described the
‘canticle’ as a ‘new invention in a sense although …
[it is] modelled on the Purcell Divine Hymns’. Clayton and
Baillie emphasised the concentration of My beloved is mine, the text
of which, by Francis Quarles (1592-1644), presents a quasi-erotic meditation on
a single line from the Song of Solomon. There was a growing sense of
spiritual unity and fulfilment, as the performers moved through the sections.
‘[L]ike two little divided brooks’, voice and piano alternated in
the opening part, the piano’s ritornello coolly countering the fullness
of the tenor’s line, before the two combined and cohered, blossoming
warmly in the first statement refrain, ‘So I my best beloved’s am./
So he is mine!’ It was the recurring refrain which articulated the
emotional trajectory of the work. After the elaborate celebration, ‘We
both became entire’, it was a poised, unaccompanied statement of
certainty; after the dramatic insistences of the following episode — with
its wide ranging, highly melismatic recitative — it was powerfully
assertive. The harmonic ambiguities of the complexly imitative third section,
culminated in a slower, more reverential declaration, Clayton’s lower
register conveying introspection. The closing part was beautifully still and
quiet, creating a mood of subdued veneration. As the voice rose, countered by
the fall of the piano to low realms, it was as if the protagonist’s
ecstatic faith in his Creator encompassed the world entire. 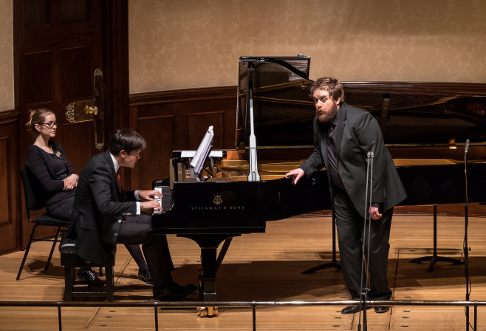 Abraham and Isaac , Britten’s Canticle II, is more obviously
dramatic and sets a scene from the Chester Miracle play. The two voices take
the roles of father and son, and as Clayton and Davies enacted the strife
between secular and spiritual loyalties which Abraham endures, they moved with
fluency between the movements, creating a dramatic persuasiveness which partly
mitigated our possible unease at the father’s resolution to offer up his
child in obedience to an exacting deity. Yet, some of the most powerful moments
come when the two voices combine in supple rhythmic unison to declaim the words
of God. The contrasting vocal timbres of Davies and Clayton blended with
potency and the singers added further weight to the awe which the Father
inspires by turning their backs upon the audience during God’s opening
demand for sacrifice. Baillie’s accompaniment intensified the highly
wrought drama: for example, the running cadential motif that closed
Abraham’s acknowledgement of his duty, ‘Ah! Isaac, Isaac, I must
kill thee!’, evoked a tone of mocking inevitability. Similarly,
Baillie’s staccato accompaniment to Isaac’s declaration of trust,
‘Father, I am all ready/ To do your bidding most meekly’, was
painfully ironic, and the darkening of the tenor’s response, ‘Oh!
My heart will break in three’, tightened the screw still further. Davies
communicated Isaac’s trusting innocence with heart-wringing clarity; but
the unsettling self-composure displayed by Isaac in the unaccompanied question,
‘Is it God’s will I shall be slain?’ was soothed by the
blessing he offers his father, Baillie’s spacious chords and the warmth,
then tenderness (‘Come hither, my child, thou art so sweet’), of
Clayton’s reply conveying some consolation. Though the darkness could
never be absolutely expunged, after the savagery of Baillie’s depiction
of the moments leading towards the sacrificial surrender of the child to God
the ‘Envoi’ drifted heavenwards in peaceful consummation.

In the second half of the programme, Clayton offered us more Britten —
the folksong arrangements —showing, after the intricate, strenuous
musical and dramatic dialectics of the Canticles, that simplicity can be just
as affecting. In particular, ‘I wonder as I wander’ was delivered
with a beguiling directness, while ‘Salley in our Alley’ and
‘Oliver Cromwell’ allowed Clayton to indulge his playful
showmanship.

There were many pairings and counter-balances in this programme. Thus
Davies, too, presented a series of traditional songs: American composer Nico
Muhly’s ‘Four Traditional Songs’ of 2011. The sweetness of
Davies’ countertenor and the poised elegance of his phrasing added much
to the articulateness of these songs. The quirky rhythmic displacements and
asymmetries of ‘A brisk young lad’ and ‘Searching for
lambs’ were engaging. ‘The cruel mother’ allowed Davies to
demonstrate his thoughtful approach to text: the repeating line ‘All
alone and a loney’ acquired ever more poignancy as the tale of despair,
matricide and spiritual banishment unfolded. Baillie’s entry, in the
second verse of this song, was characteristic of the pianist’s admirable
approach throughout the evening: his contributions stirred an imaginative
response — the dramatic dissonant punctuations of the closing verse
chillingly conjured the ‘fire beyond Hell’s gate’ where the
mother will ‘burn both early and late’ — but they never drew
undue attention.

There was new work too, as Mulhy’s Lorne ys my liking,
dedicated to Clayton and Davies, was given its world premiere. A setting of a
Chester miracle play, it — in the words of Mulhy — ‘imagines
Mary Magdalene, Mary Jacobi (the sister of the virgin) and Mary Salome (the
mother of James and John) at Christ’s tomb. There thy weep, and are
confronted by two angels with the faces of children’. A debt to Britten
is evident, and the frequent close harmonies created some lovely vocal colours,
particularly in the opening section for Mary Magdalene and in the Angelus
Primus, recalling the second Canticle. There is much dramatic detail and
contrast too: Maria Jacobi’s devotional cry, ‘Mightie God
omnipotent’, was given stature and resonance by the piano’s low
meandering; and Baillie’s jagged interruptions of Marie Salome’s
exclamations were a violent confirmation of her distress. But, the parts did
not quite add up to a coherent ‘whole’; and, after the
‘cleansing’ balm of Mary Magdalene’s final words of
acceptance, the six-hand piano postlude which saw Davies and Clayton join
Baillie at the keyboard seemed a misjudgement.

At the start of his career, Thomas Adès’ precocity was often
compared to the gifted facility of the young Britten, and the ‘The Lover
in Winter’, written when Adès was just eighteen, intriguingly
complemented My beloved is mine, telling as it does of a love frozen
but not destroyed by the chilling frosts which shrivel the external world; a
love whose fires flame once more in the final song of fulfilment. Davies’
control was evident in the opening song, which ranges high and low, and the
absence of vibrato imbued the narrative with a spiritual air. There was a
penetrating precision to the countertenor’s account of the subdued
stirrings of the natural world, intimated by energetic piano flourishes and
shifts, in the second song, and the isolation of the vocal line culminated in
the numbed monotone which opens the third song, ‘Modo frigescit quidquid
est’ (Soon all that exists grows cold). Following such numbness, the
incantatory splendour of the final song, which Davies delivered with
astonishing direction and focus, was almost overwhelmingly intense declaration
of passion.

Clayton gave an engaging account of Samuel Barber’s ‘Three
Songs’ Op.10, which were unfamiliar to me. James Joyce’s three
poems seem to have inspired Barber’s easy lyricism and Clayton’s
committed delivery revealed Barber as a natural song-writer. After the aural
evocations of the natural world in ‘Rain has fallen’, ‘Sleep
now’ — which brought to mind Britten’s many musical
depictions of sleep and dreams — began with beautifully settled repose.
But, the rhetorical interruption of the ‘voice of winter’ brought
unrest to the middle stanza, before Clayton’s delicate pianissimo
returned us to slumber and peace. The tenor’s vocal power was harnessed
to good effect in ‘I hear an army’ which concluded with the pained
appeal, ‘My love, my love, my love, why have you left me
alone?’

In his introductory essay to the published score of Peter Grimes,
Britten declared his oft-quoted ambition to create vocal music which
‘transform[s] the natural intonation and rhythms of everyday speech into
memorable musical phrases (as with Purcell), but in more stylized music’.
On this occasion, the spirit of Purcell was present from first to last, not
least because the programme was framed by realisations of his music by Britten,
Tippett and Adès. Davies took ‘Music for a while’ at a fairly
swift pace, and here and in ‘Sweeter than roses’ his gracefully
flowing line was thoughtfully complemented by Baillie. Adès’
‘Full fathom five’ opened with forceful clarion chords on the
piano, demanding our attention and initiating the voice’s confident,
expansive declarations. Britten, fittingly, had the last word, his arrangements
of Purcell’s ‘Lost is my quiet for ever’ and ‘Sound the
trumpet’ bringing both singers back to the platform and allowing us to
enjoy the relaxed intertwining of the two voices.

And there things could have closed, perfectly, with the trumpet calling us
‘To celebrate the glory of this day’ — just as we had all
rejoiced in this wonderful exploration of English settings which balanced the
familiar with the fresh, the theatrical with the contemplative, the challenging
with the artless. But, an encore of ‘The Deaf Woman’s
Courtship’ initiated a role reversal: Clayton and Davies enjoyed the joke
as they sang falsetto and in full voice respectively, but — while
appreciated by the amused audience — I found the levity disturbed the
blend of earnestness and joy which had made this such a revelatory
occasion.