For as long as Marc Blitzstein had been writing music, he was determined to create socially conscious art that was accessible to a broad audience. Much of his early career was devoted to writing workers’ songs for the American Communist Party. When he started composing musical theater works Blitzstein stayed true to his leftist politics, setting texts that focused on working-class Americans and confronted issues such as capitalism, minority politics, and labor rights. His earliest works had limited, if any, success. In 1929 he began work on The Travelling Salesman, a “colloquial” opera that follows an everyman on his journey to become President of the United States, but Blitzstein abandoned the project not two years later. His 1937 pro-union musical The Cradle Will Rock made headlines only because of its bizarre premiere. The work was ready to be staged on Broadway, but at the last minute the federal government pulled the rug out from under the production, prohibiting venues from hosting the musical for fear of its overtly Communist message. In defiance, Blitzstein performed the musical anyway at a smaller theater, playing a piano reduction alone onstage while cast members sang their lines from seats in the audience.
Then in 1946, in the wake of his successful Airborne Symphony, Blitzstein received a commission to write a musical theater work to be performed by the Boston Symphony at Tanglewood. Here at last was an opportunity to write a large-scale, genuinely American work for a high-profile institution; the first step was to find a suitable libretto. Discussing ideas with his then-lover Bill Hewitt, Blitzstein broached the possibility of adapting the work of a friend and playwright, Lillian Hellman. The two had collaborated in the past, and Blitzstein was currently providing incidental music for her play, Another Part of the Forest. When Hewitt suggested adapting the play’s sequel, The Little Foxes, for the operatic stage, Blitzstein was immediately enthusiastic and enlisted Hellman for the project.
Set in postbellum Alabama, Another Part of the Forest follows the corruption of a working-class family who cheat their way into fortune, but succumb to lies, greed, and emotional abuse. Unbeknownst to most of his family, Marcus Hubbard, the family patriarch, acquires money by exploiting his fellow townspeople during the Civil War. He abuses his wife and his three children, Ben, Oscar, and Regina. Regina wishes to escape the small town with her wealthy lover, John Bagtry, but is prevented from doing so by her father. Ben, the eldest son, learns of his father’s lewd wartime dealings and uses the information to blackmail him, effectively dethroning him, and asserts control over the family. He arranges for both of his siblings to marry into money: Regina to banker Horace Giddens, and Oscar to John Bagtry’s sister, Birdie (and to her family’s valuable land.) Ben remains single and presides over the family property, monitoring the activities of Ben and Regina.
The Little Foxes finds the Hubbards twenty years later in the same Alabama town, now involved in their own questionable business practices. Regina and her brothers are visited by Mr. Marshall, an entrepreneur from Chicago who is looking to invest in the family’s plantation. Ben and Oscar have their share of the deal ready; Regina must first convince her sick husband, Horace, to agree and—if she can—manipulate her brothers into allotting to her a larger share of the profit. Regina is the operatic setting of their story: at once intriguing and repulsive, and in Blitzstein’s words, full of “greed and glamor.” 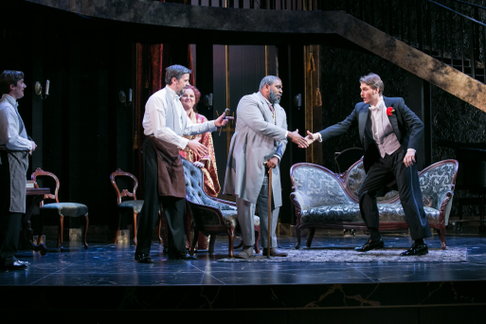