The London-based soprano met with me to talk about this exciting new opera. Librettist Sally O’Reilly, who worked with Rogers on The Virtues of Things which was premiered at the Royal
Opera House’s Linbury Studio Theatre last year, has woven together stories from The Great Fire, the flames of which were ignited shortly after midnight on
Sunday 2nd September 1666 at the bakery of Thomas Farynor in Pudding Lane, in the east of the City of London. The Fire raged for three days,
fanned by unseasonably strong easterly winds, destroying much of the City and eventually reaching The Temple, about a mile and a quarter to the west. King
Charles II put his younger brother James, Duke of York, in charge of fire-fighting and rescue operations; James and his men probably did more than anyone
to help stop the spread of the fire and they extinguished the last flames on the roof of Inner Temple Hall on Wednesday 5th September.

Rogers and O’Reilly seek to tell both the City’s tale and those of its dwellers. The opera – which is directed by SinÈad O’Neill, a regular Assistant
Director at Glyndebourne – has a cast of five and Papadakis is joined by a team of rising stars and award-winning young singers: Gwilym Bowen, Alessandro
Fisher, Aoife O’Sullivan, and Andrew Rupp.

Papadakis plays ‘London’ itself, at times moving among its citizens, the diverse populous being conjured by three singers who take on multiple roles. Then,
there is a young Lawyer who finds himself torn between allegiances and values: as the flames devour Inner Temple, his private yearning to preserve the
beautiful historical Temple battles with his duty to observe the edict which demands that the building be pulled down in order to prevent the Fire from
spreading further. The Lawyer’s regret provides a poignant counterpart to the climactic events of the inferno itself. Papadakis remarks that the period
design (by Kitty Callister) is complemented by more abstract elements; and, that the unfolding stories reveal much about human nature. At first, Londoners
find the Fire a curiosity rather than a threat; then, as its fury escalates, panic begins to grow. To prevent an exodus, which would deprive the
fire-fighters of desperately needed manpower, the Duke of York prohibits the population from leaving the City; the citizens in turn look for someone to
blame for the catastrophe which has been unleased upon them – and turn upon the foreigners in their midst.

One thing that Papadakis has found revealing is the way that the opera shows the Fire to be simultaneously destructive and creative, viciously razing vast
swathes of the city but also clearing away the old – including the rampant plague and the rats upon which the disease was born – and making way for the
seeds of new beginnings.

And London Burned
will be conducted by Christopher Stark, co-Artistic Director of the RPS Award Winning Multi-Story Orchestra which made its debut at the Proms this summer. The opera is scored for two cellos,
two horns – Papadakis describes their distorted cries as the darkness in the opera – and two clarinets, plus organ; the latter will be played by Roger
Sayer, the Organist and Director of Music of the Temple Church. Papadakis has found Matt Rogers’ approach to text-setting particularly interesting; she
observes that the words are quite ‘drawn out’, the rhythms and syllables perhaps more elongated than would at first seem natural, but she believes that
this will allow the text to be clearly heard by the audience, particularly in the Temple Church acoustic. 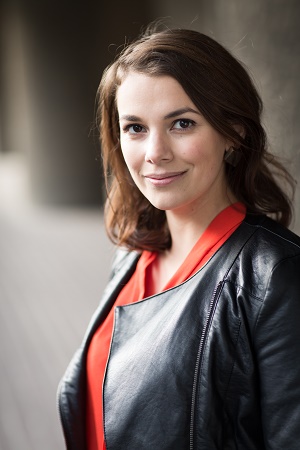 Papadakis is supported by City Music Foundation, an organisation which uses its position and contacts
with the City of London’s institutions to provide young musicians with the opportunities, tools and networks to develop a successful and rewarding career
in music. The soprano is excited to be benefitting from the experiences that the two-year programme offers, not least the opportunity to meet and perform
with internationally acclaimed musicians such as pianist Roger Vignoles and soprano Joan Rodgers. Such experiences are not just musically inspiring but can
also help musicians develop their repertoire and make new contacts, as Papadakis has found, describing her discovery of new music suggested to her by
Rodgers.

And, it’s not just the musical experiences that CMF has provided that Raphaela finds enriching, motivating and valuable; it’s the practical ones too. CMF’s
unique two-year programme also includes business mentoring as well as professional development workshops covering topics such as managing finances, tax and
pensions, copyright and contracts, presentation and interview skills, and publicity strategies – aspects of professional musical life which are not always
part of conservatoires’ postgraduate training programmes.

Finally, CMF musicians are supported in devising, organising, funding and promoting a bespoke musical project to help them develop a unique niche and
selling point. Papadakis’ project involves commissioning, producing, performing and promoting a double bill of new operas which will explore links between
music and mental health. Following workshops, the operas will be performed in the autumn of 2017 and Papadakis hopes to take this new music into
unconventional venues, extending opera’s reach and impact.

Papadakis is clearly busy with diverse projects and engagements. Last week she performed two ‘pop-up’ recitals at the Oxford Lieder Festival, in the city’s
Ashmolean Museum, with the Gildas String Quartet. The musicians presented Aribert Reimann’s arrangements of songs by Schumann, Brahms and Mendelssohn for
voice and string quartet, and Papadakis explains how she is intrigued by the dialogue that Reimann creates between the voice, which presents the songs’
melodies more or less in their original form, and the specially composed instrumental intermezzi which make use of subtle, evolving references to thematic
material from the song as points of interpretative departure. The players will reprise this programme of Reimann’s works again at the SongMakers Festival in Sheffield in November.

But, this week Papadakis’ focus is on London, as final rehearsals get underway for the premiere of And London Burned on Thursday 27th
October in the Temple Church – one of the most historic and beautiful churches in London. This artistic recreation of momentous past events, which have in
turn shaped the present-day city, will undoubtedly create its own piece of history.