Perhaps you cannot be blamed if you prefer your Druid tale to be more concerned with the love triangle that propels the story but love be damned, it cannot be denied that Director Kevin Newbury conspired with his set designer David Korins to keep impending violence in the forefront.
Mr. Korins has devised a playing environment that begins life as an armory, with heavy stone walls festooned with all manner of ancient weaponry. But hold on, he wants to have it both ways, so the huge double door flies away revealing rows of pale tree trunks, that tie in to the visual of the huge, severed, bare white tree that is suspended horizontally up center. Two enormous bull heads flank the upstage false proscenium, hovering ominously as symbols of the preferred sacrificial animal of Druid rites.
A gentle snow falls but rather than suggesting serenity it conveys a barrenness, a void of passion that would prove all too prophetic. And problematic. Significant scenic additions to this playing environment included a rolling, rustic, two-tiered wagon that may have wandered in out of an English Mystery Play. It existed solely to allow Oroveso and Norma a method of gaining focus by mounting the second level to address the populace like a politician working partisan supporters. 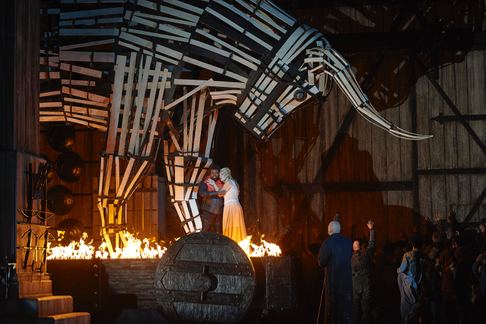 The immolation
And then there is . . .the bull. A giant, Trojan-horse-cum-bull made of rude wooden slats and set on a wheeled platform rolls on up right in the final scene to become the funeral pyre. Handsome enough as a sculpture, it was in the wrong place at the wrong time, first stealing, then lacking focus; proving awkward for Pollione and Norma to access; and decidedly unfrightening. As the “pyre” starts burning, it is safely and neatly contained along the front edge of the platform, clearly unthreatening, and it fires up well before the lovers can scramble into place for the effect. So, the big finish fizzled and amounted to just a lotta overwrought “bull.”
Jessia Jahn’s costumes had just the right primitive look along with a commendable variety. She made especially beautiful choices for Adalgisa, alluring in a simple blue gown, and Norma, radiant in sumptuous gold attire and blond wig. By making Norma look totally foreign to the rest of the citizenry, it was easy to believe that her “otherness” contributed to her veneration as a priestess. Duane Schuler is a renowned lighting designer whose his effects did not disappoint. Although some of the sudden color washes (red, green, etc.) seemed bluntly executed, they were obviously in collegial support of some rather blunt directorial choices.
Not that Kevin Newbury’s theatrical guidance did not have good intentions and some fresh ideas. Crowd management and motivation of group entrances/exits were well conceived overall, with only one instance of awkwardness when the chorus (and Oroveso) were left without a motivated focus. The smaller ensembles contained so many moments of meaningful interaction that it seemed a shame that there were also conspicuous lapses with characters upstaging each other, while doing their best to get out of the way of the focal singer.
Norma began the show on stage holding a torch aloft, a nice premonition of her fate, although it did deprive her of Bellini’s star entrance later in the scene. I liked the Druid “salute,” a “dap” variation on the sign of the cross that was well incorporated and conveyed a fine sense of communal religious observances. I was less persuaded by manufactured bits like having a group of female supers cross the stage bearing black stools just prior to the first Norma-Adalgisa duet, and being persuaded to leave two stools en route stage left so that the two soloists could “sit and chat.” It also rang false that those two leads casually folded the children’s blankets and played with their toys during the conclusion of their second duet! There is a bit more at stake at that point than tidying up the nursery like giggly schoolgirls.
If the staging sometimes called attention to itself, the performers were able to maintain musical integrity and make a solid case for Bellini’s masterpiece. In the pit, Stephen Lord led a robust, refined account of the score and the players responded with real, purposeful dramatic fire. The splendid cello solo was but one of many instrumental high points, and the entire ensemble excelled under Maestro Lord’s knowing baton.
The role of Norma is a “big sing” of course, and world star Sondra Radvanovksy more than fulfilled expectations. Is there anyone in the business that has a firmer command of her technique than Ms. Radvanovsky? She knows what she wants to do, what she can do, and has the wisdom to know the difference. And in an age when many voices sound somewhat anonymous, her instrument is recognizable and uniquely personal.
The soprano is never heard to better advantage than when she is ravishing us with beautifully controlled filigrees of pianissimo passages. Caballe, Sills and Scotto were past mistresses of this effect, and I would be hard pressed to name any current performer who is Sondra’s equal at this intense, hushed soft singing. It is when she presses harder that her tone can come to grief, with high notes that are admirably secure nonetheless taking on an occasional harsh, metallic tinge.
Still, the diva performs with total mastery of her art, both musically and theatrically. If her turn as Norma is not quite the complete triumph it may become, it is owing to a certain cerebral calculation of effects which are meticulously judged but somewhat wanting in spontaneity and emotional honesty. I have seen Ms. Radvanovksy be incredibly moving and genuine on past occasions, but on this night I was more aware of her consummate craft than her personal commitment. 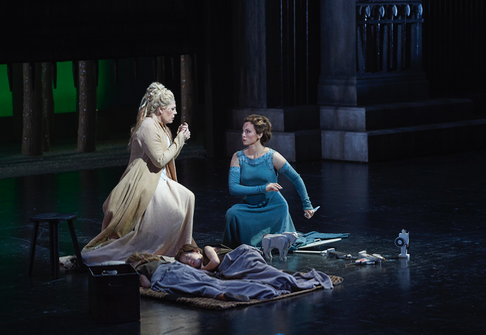 Sondra Radvanovsky as Norma, Isabel Leonard as Adalgisa
We are spoiled by the perfection of legendary Norma-Adalgisa match-ups like Sutherland-Horne, Callas-Cossotto, Caballe-Verrett, or presently, Meade-Barton. It has to be said the luminous Isabel Leonard is a very affecting Adalgisa, and her plush, throbbing mezzo-soprano is thing of refined beauty indeed. Ms. Leonard is such a sympathetic presence, her bearing at once determined and contrite, that I wish she had been a better vocal match for her co-star. Her rounded, suave delivery had all the requisite coloratura at her command, but explosive phrases were executed within the vocabulary of her own distinctive, gentler firepower. The duets were always well-coordinated and cleanly managed, only at odds in tonal approach.
Russell Thomas proved to be an engrossing Pollione, his burnished, meaty tenor caressing plangent phrases one minute and hurling out riveting declamations the next. I had enjoyed Mr. Thomas some years ago as a promising Hoffmann, but nothing could have prepared me for the assertive star turn he provided in Norma. He is deservedly maturing into a major artist on the international scene. Dimitry Ivashchenko was a sturdy Oroveso, although his ample bass could turn hard when pushed for dramatic volume rather than deployed for musical finesse.
Young Charles Sy had pleasing tone to spare as he put his well-schooled tenor in good service of Flavio’s several scenes. Aviva Fortunata made a highly favorable impression, her attractive, substantial soprano imbuing each of Clotilde’s phrases with such real quality that it reminds us the great Sutherland once herself made quite an impression in this secondary role.
James Sohre