Akhnaten or Akhenaten as his name is sometimes written, ruled Egypt for seventeen years, from a date near 1351 to a date near 1334 BCE. He and his queen, Nefertiti, were part of the eighteenth dynasty. Because composer Philip Glass and his librettists were researching so far back into history to tell his story, they could not answer many of the questions about events in his life. Thus, the opera is not historical. It is inspirational. Akhnaten tried to change his country’s religion from polytheism to a quasi-monotheism in which the Sun God ranked above all others.
On Saturday November 5, 2016, Los Angeles Opera presented the American premiere of Phelim McDermott’s spectacular production of Akhnaten, which had already been seen at English National Opera. Countertenor Anthony Roth Costanzo was a perfect fit for the role of the religiously inclined pharaoh. Head shaven and body waxed, he looked the part of a magnificent ruler, and his clear, soaring tones were as smooth as freshly ironed silk. He seemed to produce his strong voice easily and he was not tired at the end of this very long role. Akhnaten was onstage almost all the time. 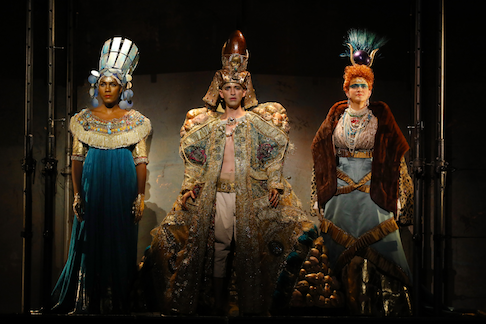 J’Nai Bridges as Nefertiti, Anthony Roth Costanzo as Akhnaten and Stacey Tappan as Queen Tye
McDermott’s staging was close to choreography because it demanded a great many slow, meditative, ritualistic movements from the principals. In contrast, there were quick motions from the excellent jugglers in the background who never dropped an object until the last act when they did it for effect. Juggling is thought to have been a part of palace life in ancient Egypt since it is seen in a tomb painting from four thousand years ago. Designer Tom Pye’s solid three-story stage construction allowed both the actions showing the pharaoh’s slow story and the visual counterpoint of the juggling to be seen at once. His costumes portrayed the riches of Egypt’s royalty in jewel tones, exquisitely woven transparencies, and enormous trains.
The name Nefertiti means “a beautiful woman has come.” Contralto J’nai Bridges was a gorgeous Nefertiti as she sang the part of the consort who gave meaning to Akhnaten’s life. She added lower harmony to his singing as she completed his image. Bass Zachary James was the Scribe who narrated the story in English. Glass made a point of having that character sing in the language of the audience since there are no titles for this opera. I would have liked titles for the material sung in Ancient Egyptian, Hebrew, and Akkadian, but the composer preferred to give listeners the feeling of the ancient world rather than an actual text. Not only were there no English titles, I could not find any material in Spanish in the program.
The soprano with the opera’s top vocal line line was Stacey Tappan as Akhnaten’ mother, Queen Tye. Probably the most loving stage mother-in-law, she sang with clear legato tones and never caused friction between the lovers. On with the other hand, Nefertiti’s father, Aye, sung by Patrick Blackwell, fanned the flames of the old religion. A stalwart bass-baritone, Blackwell’s sound was easily heard above the chorus that often surrounded him.
Korean baritone Kihun Yoon sang with a robust sound as the self-important heir-to-the-throne, Horemhab, who would eventually bring back the old polytheism and allow Akhnaten to be designated a heretic. Frederick Ballentine was the evil High Priest who plotted Akhnaten’s downfall. Akhnaten’s six beautiful daughters provided gorgeous harmonies in the final act. Coloratura soprano So Young Park, lyric sopranos Summer Hassan and Elizabeth Zharoff, mezzos Michelle Siemens and Michelle Hemmings, together with contralto Sharmay Musacchio formed a notable sextet of graceful voices that lightened the mood of the otherwise somber final act.
Chorus Director Grant Gershon’s group sang with spirit and considerable exuberance. Conductor Matthew Aucoin, LA Opera’s new artist-in-residence, led a dark sounding accompaniment to a vital and exciting performance. In his orchestration of the piece, Glass chose to leave out the usual top line of a score, violins, and that omission gave the accompaniment an unusual sound. Aucoin’s rendition of the score was vital, translucent and beautifully detailed. Akhnaten is a show-stopping modern opera and the Los Angeles audience loved it.
Maria Nockin