Now, the Royal College of Music have offered a production ‘based on one which was first presented at the 2013 Buxton Festival’, in which director Harry
Fehr takes a more pragmatic, and ultimately more fruitful approach, transferring eighteenth-century class-bound conflicts to a modern-day, luxurious Long
Island milieu.

Mozart’s plot is not overly complicated by the standards of eighteenth-century opera seria, though you need to keep your wits about you. The
Marchesa Violante has been violently assaulted and left for dead by her jealous lover Count Belfiore (in this production, the front drop rises and falls
several times during a hyperactive overture-mime, the flashbacks to past transgressions emphasising the domestic violence). Violante has disguised herself
as Sandrina, a gardener – or, in this case, a wedding florist – and with her loyal servant Roberto, who has similarly assumed a false identity, as ‘Nardo’,
is working in the home of Don Anchise, the Podest‡ (Mayor) of Lagonero. The Don is besotted by Sandrina, to the annoyance of Serpetta, his enamoured
servant to whom, in turn, Nardo has become attached. The Don’s niece Arminda has fallen in love with the dastardly Belfiore and has abandoned her former
beau, Ramiro. The wedding of Arminda and Belfiore is shortly to take place, but Sandrina has other ideas … 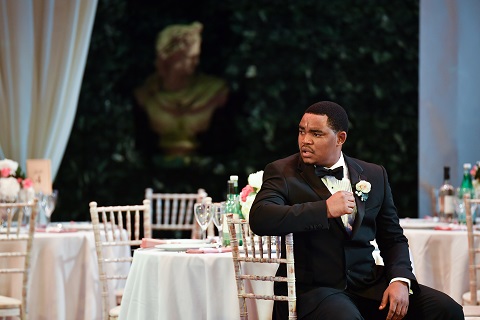 Translating the opera to the modern age works surprisingly well. I had anticipated that Counts and Marchesas might not be comfortably accommodated within a
US soap-opera style set, but in fact the characters slotted neatly into the hierarchical stations. Fehr appreciates that the improbabilities, deceits and
disguises of libretto are more buffa than seria, and his attention to detail is admirably engaging and animating.

Yannis Thavoris’s set is vivid and convincing. In Act 1, a catering company erect a marquee for a society wedding; the chandeliers sparkle over elegant
table placements and tasteful drapes. One might argue for a double fee for the cast who have to serve as both set assemblers and singing protagonists.
Throughout, John Bishop’s lighting is bright and energising; at the close, especially, the strong colour tones whisk us from pseudo-realism to indulgent
fantasy and fun. 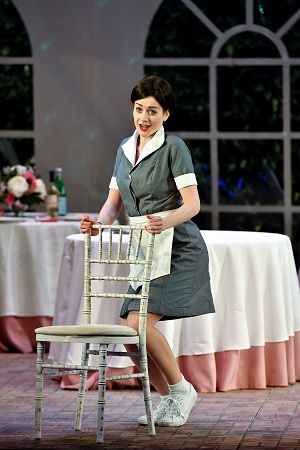 Act 2 sees Sandrina afflicted by the Podest‡’s attempts at courtship and subsumed into legal accusations against Belfiore. Confusion reigns when Sandrina
finds herself in a wild forest. As night falls, search parties set off to find her. In the darkness, the Mayor mistakes Arminda for Sandrina, while Arminda
assumes he is the Count. Meanwhile, Belfiore comes across Serpetta and thinks she is Sandrina, and Serpetta confuses him for the Mayor. Got it? The chaos
is unravelled (partially) as Belfiore and ‘Sandrina’ recognise each other; but they promptly lose their senses and imagine themselves as the Greek gods,
Medusa and Alcides. 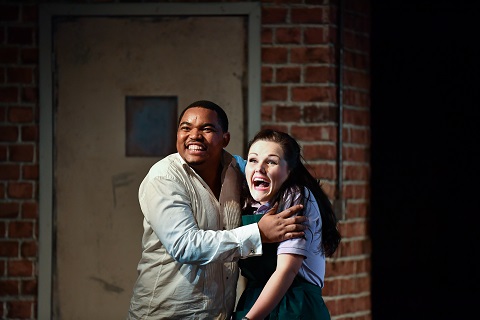 Fehr locates this scene in the basement boiler-room of Anchise’s mansion. Hints of the original wild forest remain in the paintings which adorn the
forward-placed corridor, a formal device which facilitates some rapid scene changes to the rear. There’s much farcical tomfoolery, as Belfiore and Violante
are reconciled, though not all of the horseplay is in keeping with the score. 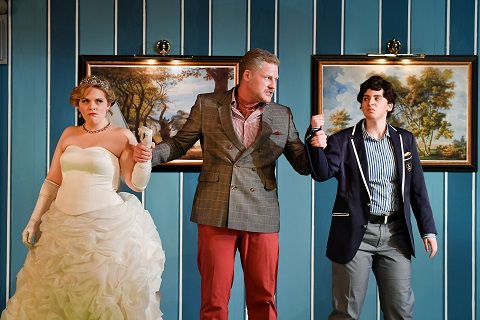 The RCM cast were uniformly accomplished and vibrant, and the ensemble work was well-drilled. Soprano Carly Owen, as Violante, was feisty and full of
character; she used her focused tone and strong vibrato to convey Violante’s steeliness, but there was not much variety of vocal or dramatic demeanour. One
felt that Thobela Ntshanyana’s Belfiore wouldn’t stand a chance in the face of Owen’s resilience and resourcefulness. Ntshanyana has an appealing tone but
at times lacked animation and depth of character. I’d have liked to see much more volatility and a sense of Belfiore’s utter self-absorption. Elizabeth
Reeves strutted haughtily as Arminda and delivered a show-stopping tirade in Act 3. Kieran Rayner was an ardent and loyal Roberto. In the trouser role of
Ramiro, Kamilla Dunstan was alert as Arminda’s sporty admirer Ramiro. Best of cast was Thomas Erlank as the Stetson-sporting Mayor; Erlank’s relaxed tenor
conveyed both Anchise’s self-assurance and his weariness with the youngsters’ romantic waywardness.

Michael Rosewell conducted authoritatively, driving through the recitative and never allowing the action to settle into complacency. The RCM players tired
a little, though; this was the last performance of a run of four, and there was some increasingly insecure horn playing after the interval. But, the
overall spirit was full of zest.

Fehr has created a beguiling comic caper, but the young singers were not quite able to convince us that this drama was peopled by real human characters. Indeed in Mozart’s day the opera was a failure: its plot was considered overly complicated and excessively long, and its ‘mad scene’ between Violante and Belfiore was considered absurd. Fehr overcomes some, but not all, of such question-marks.