Kaija Saariaho is a composer fêted
the world over and the United States has been a bit tardy in perceiving her
charm. (The opera’s premiere was at the Salzburg Festival in 2000 and the
Santa Fe Opera produced it in 2002, but Darmstadt, Bern, Bergen, Toronto and
Quebec all beat the Met to the punch.)

Saariaho is Finnish and studied at the Sibelius Academy.  She then
struck out for the avant-garde study centers of Europe: Freiburg, Darmstadt and
then Paris where she worked at IRCAM, Pierre Boulez’ famous institute for
experimental music.  At IRCAM she worked with composers who experiment
with combining electronic sounds with acoustic music. The term
spectral music was first used to describe the style by Hugh Dufourt, a
philosopher and composer, in 1979, but recently the term has been resuscitated
and Saariaho’s growing fame and popularity has brought the term to a
popular frenzy.

The Met opera production by Robert Lepage is a visual masterpiece. Photos
cannot convey the almost palpable illusion of water created by rows of LED
lights. The show began with a total blackout — including the orchestra
pit — then tiny lights appeared like small twinkling stars — then
the dots of lights grew into shimmering lines of light which resembled ocean
waves. A beautiful verse in Amin
Maalouf’s libretto based on the history and songs of a
twelfth-century troubadour Jaufré Rudel (sung by Philadelphia’s
bass-baritone Eric Owens) has Jaufré ask of the Pilgrim (sung by
mezzo-soprano Tamara Mumford) “Why is the sea blue? Why is the sky
blue?” 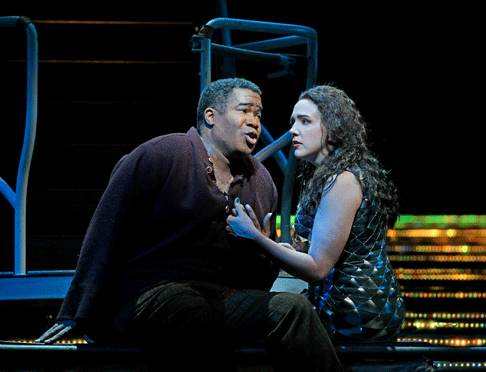 Eric Owens as JaufrÈ Rudel and Susanna Phillips as ClÈmence

Susanna Phillips, the soprano who plays Clémence, the Countess of
Tripoli, the unrequited and unknown love of the troubadour, has lovely pure
high notes and it is a good thing because that is mostly what she gets to sing.
The part of the Pilgrim has a much more melodic score. Rudel’s first
songs are quite hard to hear in the very lowest part of his range, but the
score for his duets with the Pilgrim and with Clémence were clearer.

The program notes by Cori Ellison, a dramaturg at Glyndebourne Festival
Opera and a member of the vocal arts faculty at Julliard School, contain some
outrageous sentences like:  “The dearth of apparent action
through the opera’s two hours is mirrored in the illusion of musical
stagnation, by now a trademark of Saariaho’s music.”
Don’t let that scare you, I stayed awake for the entire show.
Ellison also wrote the subtitles, which were interesting at best. Lines like
“he is my outremer” kept appearing. (“Outremer” means overseas in French and I suspect the message was that
Clémence’s fascination with Rudel was due to the fact that he was
a foreign exotic.)  The wordplay in the original libretto by Maalouf of
the word “clément” and “Clémence” also came out
rather awkwardly in English, but that would have been tough to
render.

The orchestration was the highlight of the opera. Bassoon lines came through
as wavy and oceanic, the oboe took the dreamy and twinkly phrases and the
electronic sounds of the keyboard added mystery, as did the watery, pedaled
notes on the piano. The strings were used to enhance the ethereality. There was little brass in the score, but the piccolo provided strategic punctuation.

Another coup for this production was to have a woman wield the baton.
Finnish conductor Susanna Mälkki,
in her Met debut, managed to form a composite of the ethereal sounds and kept
the pace as much as possible, although even she was challenged by the tediously
long ending. The warm hug between female composer and female conductor on the
Met stage was a historic moment for women in music. Put that in your pipe and
smoke it, Mr. Toscanini.

L’Amour de loin is a stunning achievement but I cannot help
feeling that Saariaho’s chamber music seems more structured than her
orchestrations.  The performances of her string quartet Terra
Memoria and her trio Mirage for soprano, cello and piano, each of
which I heard at the Marlboro Music Festival in Vermont, left a more indelible
musical impression on me than L’amour, but the production is
well worth seeing. Don’t worry about the dearth of action; it is
the lot of most troubadours. Think of poor old Tristan.