Wigglesworth tells the ‘tale’ clearly: swiftly and surely we follow the
dismal progress that Leontes’ jealousy initiates. The
composer-librettist has pruned and pared Shakespeare’s text,
cherry-picking some of the play’s memorable and compelling one-liners –
‘Bitter on my tongue. Bitter in my thought.’ – but compressing and
excising ruthlessly (one might feel, at times, mercilessly).

Indeed, the brevity of the opera – there is less than two hours of
music – is both its strength and weakness. There is certainly an
absorbing singularity of focus. But, Shakespeare’s play is more than one
‘tale’ and the erasures rob the drama of its structural parallels and
linguistic richness. Yes, music can

restore, represent and reinterpret much that has been removed, but
Wigglesworth’s score, though beautiful, seemed on this single hearing to be
more illustrative than dramatic.

This opera is not so much a ‘sad tale’ that’s ‘best for winter’, but a ‘serious’ Winter’s Tale. Comedy, romance and
pastoral are all largely dispensed with, and so we are not offered the
opportunity to revisit the ‘tale’ in different contexts and learn new
meanings; this unbalances the structure of the drama, making the reversal
and restoration of the final moments less convincing.

For when Shakespeare throws a foundling story into the mix he provides an
escape route from the tragic trajectory which up until that point seems
unavoidable. ‘Time, the Chorus’ ushers us into a new, natural world, one
where Leontes’ mistakes need not be as important as they initially seem.
And, though we return from the pastoral idyll in Shakespeare’s final act,
the spirit of romance penetrates Sicilia. The ‘resurrection’ of Hermione
harks back to myths of gods reborn as well as fairy-tales of ‘sleeping’
maidens. Leontes’ discovery of long-lost friend/daughter/son-brother, and
the self-deceiving ‘lies’ that the lovers tell about their regal/non-regal
status are the stuff of comedy. These generic echoes surely affect how
‘seriously’ we take Leontes’ jealousy and the statue scene?

Here, though, we have no Autolycus – that tale-teller and singer, rogue
agent of Providence and man of masks who brings laughter into the
tragedy. The all-singing, all-dancing confidence trickster is also an
unwilling agent for good: he defects the Shepherd and Clown from taking
the fardel to the King; and when he witnesses the denunciation of
Florizel and Perdita by Polixenes, Autolycus decides, though his
motives are ambiguous, to take a hand in the action, providing Florizel
with his disguise.

Not only does Autolycus provide an antidote to sentiment in the
pastoral comedy, he also offers a playful counterpoint to Leontes’
story, paralleling the latter’s self-destructiveness, acquiring a growing moral
sense. At his last appearance on stage, Autolycus is declared true by the
Clown who knows him to be false, a comic variation on Leontes’ declaration
that he sees life in what he knows to be stone; both scenes form part of
the pattern of discourses on the potential for regeneration in fancy and
faith, and on the truth of art grounded in nature. 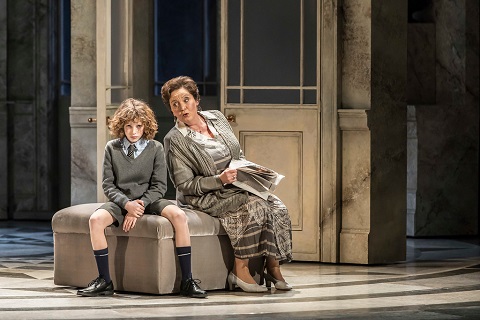 In Wigglesworth’s opera the latter theme, surely central to Shakespeare’s
play, is outweighed – as is all else – by Leontes’ fanatical jealousy. In
the brief second Act in rural Bohemia the
debate that Polixenes has with Perdita about the relative merits of
nature and art, so eloquently argued and which looks back to the
stories of the opening and forwards to the reconciliation of the end, scarcely registers.

Of course, we are not watching Shakespeare’s play, and it is perhaps
unfair to judge Wigglesworth opera on anything but its own merits. And,
the latter are manifold. I began by noting the clarity and directness
of the account and this is in no small part due to the nature of the
text, and its setting: the short phrases are singer-friendly, full of
open vowels and sympathetically set in a Brittenesque manner. (Indeed,
there are more than a few spot-the-Britten-opera moments in the score,
not least the reading of the indictment in the oracle scene which
echoes Swallow’s interrogation of Peter Grimes.) The brevity of the
text does mean that the rich figurative arguments of the language, its
‘poetry’, are lost – along with art and artifice, out go the diverse
images of madness/imagination, flowers/fishing, sickness/medicine,
lost/found, theatre, cosmology etc. – along with the patterning of
particular words such as ‘hand’, ‘faith’, ‘fancy’. There is little
difference between the register of the Sicilians and the Bohemians,
though Wigglesworth uses the woodwind effectively in the rural act,
distinguishing the sound-worlds.

The score is spacious and gentle, by turns lean – just a few
instruments, or even orchestral silence – and then more luxurious. The
instrumental palette is finely variegated; the Act 3 string intermezzo
is tender and beautiful. But, the accompaniment does just that,
accompanies; seldom does it create dramatic momentum. With the entry of
the admirable ENO chorus – at the end of Act 1 as adulators of
Hermione, and as festive Bohemians in Act 2 – there is an injection of
impetus through the communal festivities that allow the significant
mingling of the low and natural population with the court. 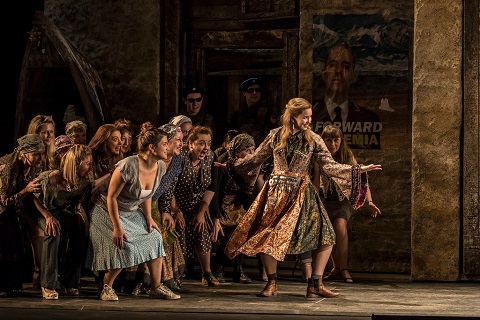 I was surprised, though, that the moment when Polixenes discovers his
son’s plans to marry Perdita is elevated by Wigglesworth to a dramatic
intensity equal to Leontes’ wrath in Act 1. There is an obvious
parallel between Polixenes’ disapproval and Leontes’ unbending
assertion that the world bow to his dream, but surely the pastoral
convention – especially the interchange of royalty and shepherds –
diminishes the potential impact of any ‘threat’? Then, having turned up
the temperature of Polixenes’ ‘madness’, Wigglesworth resorts to
unaccompanied spoken text for Polixenes, who bellows that Florizel is
no longer his child/son/blood. Surely such a climax is deserving of
musical representation? 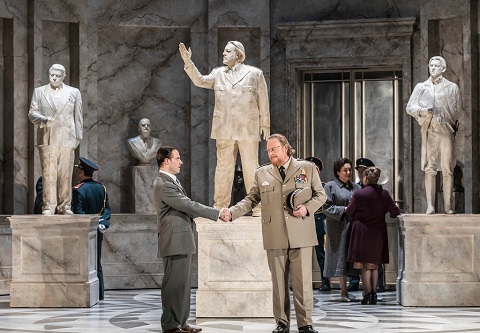 An enormous statue of the jealous tyrant dominates the Sicilian acts,
and Iain Paterson was a towering vocal force, wonderfully embodying
first the self-consuming grip of Leontes’ obsession and then the pathos
of his ‘winter’, spent ‘in shame perpetual’. This performance was all
the more impressive given the terseness of the text, for Paterson was
deprived of Leontes’ spitting sequences of rhetoric questions and repetitions which have such an
unstoppable momentum in the play, convincing him of the veracity of what in
fact he knows to be false. 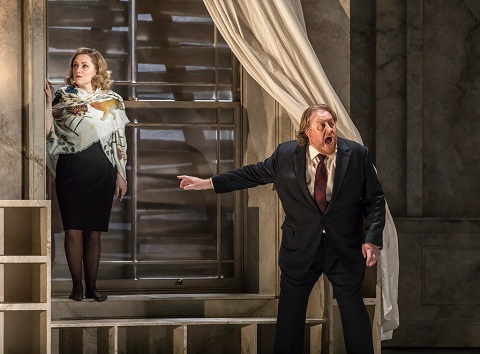 Sophie Bevan delivered some fine outbursts of injustice as the wronged
Hermione: ‘There is a grief lodged here which burns’ literally scorches
itself into the listener’s heart. Bevan’s soprano is big and rich, and
she was well-served by Wigglesworth’s melodic writing. I found this
Hermione a little too playful, however, when coaxing Polixenes to stay
in Sicilia: charged by her husband to persuade his Bohemian friend to
stay, she should be warm and companionable, but never in danger of
losing her dignity.

Some literary critics have suggested that Hermione stands for divine
Grace, or even the figure of Christ, but Bevan’s Hermione did not
acquire such ‘grace’ until the final scene (and this seemed
inconsistent with the earlier characterisation), when she offered
Perdita a blessing. I wasn’t entirely convinced that Bevan really
conveyed the tenacity of the mother’s desire to see her child grow and
the strength of her belief in the oracle’s story which, when fulfilled redeem all – but the fault may lie
with the adaptation and not with the singer.

Leigh Melrose was firm of voice and conviction as Polixenes, and both
he and Timothy Robinson, as the trusted counsellor, Camillo, exhibited
superbly clear diction. Robinson was a convincing ‘link’ between the
rulers, his mannerisms suggestive of the characteristics of the two
courts. 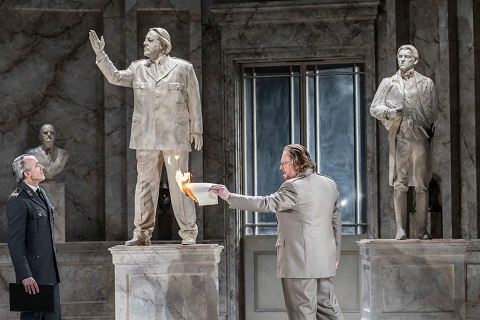 Susan Bickley’s Paulina was tough and confident, insistent on
telling the king that Hermione is innocent and has delivered a baby girl.
Loyal, frank and resourceful, Paulina’s willpower wins through, and Bickley
remained ever-watchful fiercely reminding the old king of his dead wife and
intimidating him during the stage-managing the denouement.

Audacious happiness radiated from Anthony Gregory and Samantha Price as
Florizel and Perdita. This Perdita’s natural grace belied her lowly status
and confirmed her royal strain, and Price’s lyric soprano was equally
charming. Gregory used his lovely, warm tenor to raise Florizel above the
stereo-type of ‘disguised lover-prince’, showing him to be both gallant and
headstrong.

In an interview with The Guardian, Kinnear acknowledge
the relevance of Shakespeare’s play in the context of current global
politics: ‘It hasn’t escaped us that the piece is about regeneration. About
how we still hold on to each other despite fractures, how good things can
coalesce around those fractures. And yes, we’re doing a piece about an
authoritarian, borderline-tyrannical leader who is appalling in his
treatment of women, ignorant of nature, and quick to create borders between
a neighbouring country. […] The timing of premiering it in February 2017 is
slightly discomforting. Talk about opera being relevant.’

Wigglesworth and Kinnear leave us in no doubt about the potentially tragic
consequences of humanity’s ineradicable wish to make the world fit our desires.
We are pulled into Leontes’ narrow vision and we are repelled by the
insanity of his perspective. As king, he can enforce his delusions on
others, and it is only the conventions of pastoral and romance which
prevent Leontes’ actions spinning into insanity and death. I just wish
that this opera had more to say about art’s potential as a ‘healing
power’.