Ever since an anonymous first-night critic in 1881 attempted to identify
Gilbert’s ‘idyllic’ poet Archibald Grosvenor with Arthur Swinburne
speculation has associated Grosvenor and his rival versifier, the ‘fleshly’
Reginald Bunthorne, with prominent aesthetes of the 1860s such as Edward
Burne-Jones, Dante Gabriel Rossetti, James McNeill Whistler and of, course,
the most glorious fop of them all, Oscar Wilde.

Interestingly, when impresario Richard D’Oyly Carte sent Wilde to the US on
a lecture tour to illustrate the target of Patience’s satire, the
resulting positive reception led to D’Oyly Carte’s wry observation that,
‘Inscrutable are the ways of the American public and absurd as it may
appear, it seems that Oscar Wilde’s advent here has caused a regular craze
and given the business a fillip up.’

But, today G&S is very much a matter of individual taste. And, then
there’s the question of updating: if the creators were lampooning their
contemporaries, should a present-day director turn the sardonic spotlight
on modern mores and manners? While Jonathan Miller may have successfully
excised Japan from the Mikado, there are many ‘modernisations’
which trip themselves up on the pedantry of ‘relevance’.

Director Liam Steel plays it straight in this ETO production, and the cast
perform with the regimental conformity of good executants performing a work
of genius. The knee-bends, handkerchief flourishes, fan-flapping,
goose-stepping etc. are timed to perfection; but neat choreography does not
a comedy make. There was a danger that the show would lapse into the
clichÈs of pantomime or soap opera, and I longed for dramaturgy which
sharpened the satirical edge and gave the performers greater freedom to
‘feel’ the dramatic moment. Perhaps such licence will blossom during the
spring tour.

In 1882, Oscar Wilde visited Woodstock, Canada where he gave a lecture
entitled ‘The House Beautiful’. Designer Florence de MarÈ’s set doesn’t
quite call to mind the gilded stylisation of ‘ornamental aesthetic’
bravura, but she does give us the flora and fauna of a William Morris
arts-and-crafts textile pattern – abundant in detail if lacking intensity
of colour. De MarÈ’s muted green and pallid taupe may not conjure a
synesthetic sensuousness fitting for a cult of beauty, but she does offer
peacock feathers and vine-tracery aplenty. And, there is a match of visual
motif and music, in the juxtaposition of the lethargic pallor of the
languishing maidens’ ugly dresses and languorous refrain with the red-breasted
dragoon’s robustness and readiness. 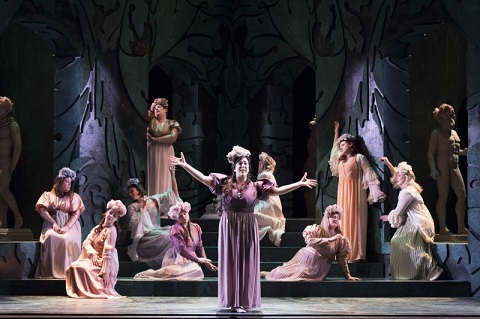 Patience
is subtitled ‘Bunthorne’s Bride’ but in fact the eponymous ingÈnue
dairymaid is not the leading character. Instead, the show is dominated by
the rival poets Bunthorne himself and Archibald Grosvenor, who compete for
the affections of the aforesaid maidens and Patience. Indeed, at the close,
Bunthorne is singularly single, lacking a bride, despite the erstwhile
attentions of the ‘love-sick’ maidens, who spurn their formerly affianced
Dragoon Guards and their manly commander, Colonel Calverly, in his favour.
When, by the end of Act 1, Bunthorne seems destined to wed Patience, one
wonders if the musical entertainment is about to run into the ground; but,
the arrival of the bookish Archibald Grosvenor re-directs the feminine gaze
and the axe hovering over Act 2 is circumvented.

Arthur Sullivan’s score equals Gilbert’s text for playful parody and
pointedness, and the ETO principals and chorus produced a charming
performance that would make even the most G&S-phobic audience-member smile, if not
guffaw. The young cast and the ETO chorus of ‘twenty [necessity resulting
in the substitution, ‘several’] love-sick maidens’ and stiffly uniformed
Dragoons proved well-versed in the idiom, both spoken and sung. 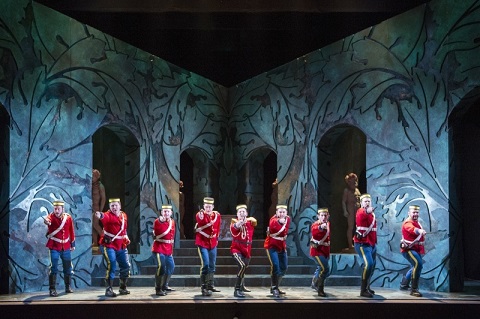 Though the overture lacked sprightliness, subsequently conductor Timothy
Burke paced the drama effectively. Donizetti would have been proud of the
Act 1 Finale.

Bradley Travis’s Bunthorne was an extravagant concoction of cerise and
orange velvet, floral stockings lilies and peacock feathers, topped with an
extravagant beret. Travis postured, posed and attitudinised with grace,
gallantry and gentility, and stayed just the right side of camp droopiness.
His ironically drowsy patter number, ‘Am I Alone and Unobserved, I Am’, got
the show on the road, characterised by RP diction and effortless singing;
and, Bunthorne’s ‘Oh Hollow! Hollow! Hollow!’ was delivered in a honeyed
baritone not lacking a splattering of hypocrisy and humbug. The swift ‘If
you’re anxious for to shine’ was deftly delivered. Travis has superb
theatrical timing and knows when to turn up the comic thermometer: his
ham-fisted attempts to fix the raffle to ensure that Patience is his bride
almost came deliciously unstuck when Bunthorne wedged his elbow in the urn
containing the ticket stubs. 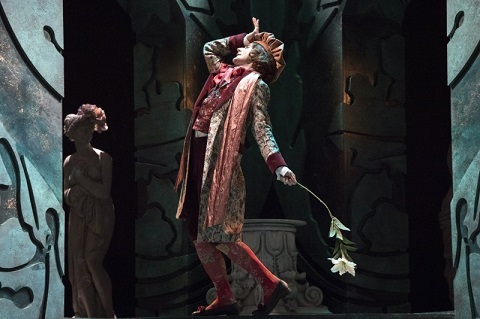 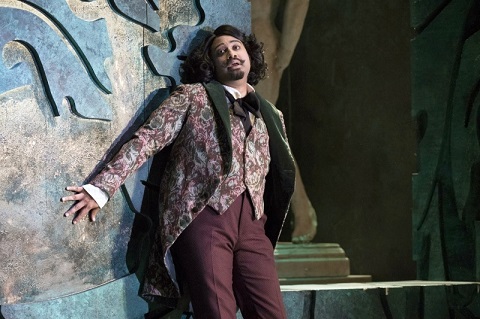 Lauren Zolezzi’s Patience sparkled with diamond-cut precision from her
entrance aria, ‘I cannot tell what this love may be’. Her diction – indeed
that of the entire cast – was so clear that, for once, surtitles might
easily have been dispensed with. Zolezzi was a paragon of no-nonsense
pragmatism; and she swung a laden milk-churn aloft with the same effortless
ease with which she despatched the soprano’s lofty flights. 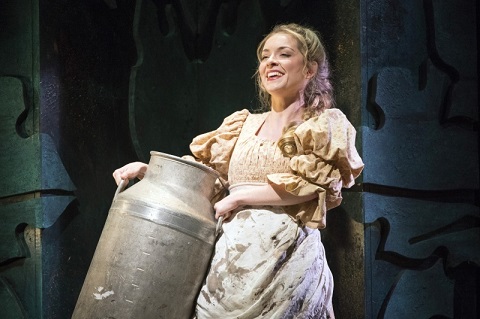 As Colonel Calverley, Andrew Slater was paradoxically blustering of spirit
and nimble of voice in his patter number, ‘If you want a receipt’. Valerie
Reid evoked sympathy for the pining Lady Jane, despite Gilbert’s unkind
misogyny, in ‘Silver’d is the raven hair’, clutching her double bass
trenchantly, and striking an adroit balance between gravity and comedy. 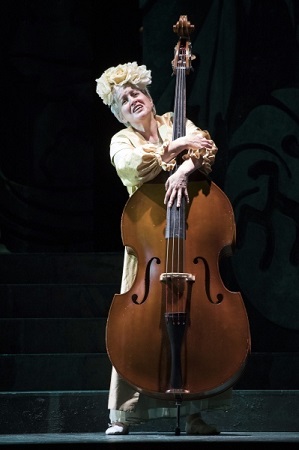 On the whole, Steel, too, struck the right balance between comedy and
opera. In 1900, when a revival was being considered, Gilbert himself
questioned whether Patience would appeal to then-contemporary tastes. His
doubts proved unnecessary and Patience triumphed once more. And,
why would it not? By the 1880s Aestheticism was no longer new: Gilbert was
poking fun at more than while lilies and japanoiserie. His lampooning of
those who starve life to feast on art speaks across the ages; one needs
beauty and a square meal – and this production delivers both.