The immediately preceding production of Seattle Opera’s 2016-17
season had been the much-traveled Traviata from the atelier of Peter
Konwitschny, and the show’s rather coarse updating and arbitrary
dramaturgy had not gone down at all well with the company’s conservative
but sophisticated audience. Was this to be another evening of mannered,
second-hand Regietheater? The immense bare black box confronting the
house as we entered was not promising: even the supertitle screen looked more
like a stage-wide guillotine than a refuge for the eyes of the Czech-impaired
among us. 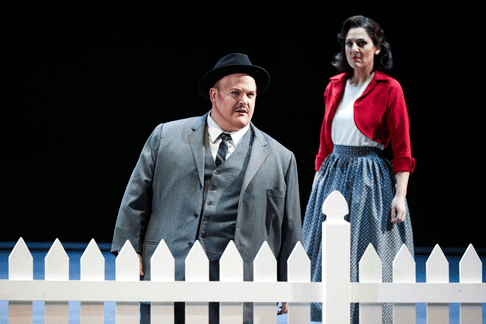 Well, Regietheater it was, but of the engaged, engaging
audience-friendly kind. As the music began, the marvelous American dramatic
soprano Melody Moore stood center-stage, impaled in a column of searing white
light. Then around her, images familiar to most of the audience began to fill
the box: the rosy brown basalt cliffs of an Eastern Washingotn river valley; a
white picket fence complete with red-flagged mailbox by the gate; townsfolk
strolling in high-1940’s Sunday-go-to-meeting gear; finally, a
broadspread American flag descending to complete the thoroughly Normal Rockwell
picture.

The visuals of Mark Howett and Genevieve Blanchett’s deft production
did not remain so Grant-Woody American Gothic (though the tschochke-choked home
the heroine shares with her cringing husband and horrible mother-in-law could
easily host that master’s Daughters of the American Revolution).
Projections of roiling waters, clouds of crows began to invade the scene as the
dream of childish bliss Kàt’a recounts to her bobby-soxer
sister-in-law fade away. Stark lighting contrasts both isolate and link the
performers. 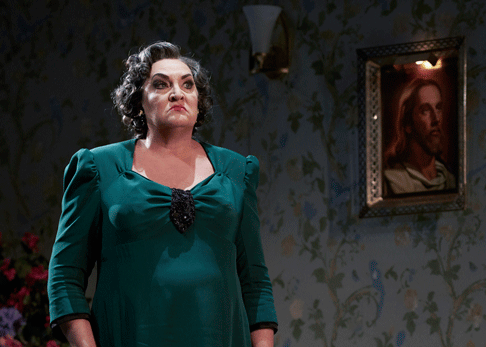 Kàt’a’s dreams are the key to look and dramaturgy of
Patrick Nolan’s production. The danger for an updated, Americanized
Kàt’a is implausibility: how can the love even of a timid
small-town girl and a feckless rich boy be thwarted so thoroughly the era when
Rosalind Russell, Ginger Rogers, and Betty Grable are setting the tone for
young American girls’ behavior every weekend at the movie palace?

But this Kàt’a isn’t just a dreamer: she’s
all dreamer. When life hands her lemons like mom-in-law Kabanicha
(Victoria Livengood, a church lady who doesn’t mind a smoke, drink, or
cuddle behind closed doors) and husband Tichon (Nicky Spence, a boozy bullpup
without a bite) she incorporates them as dream enemies, and finds a dream
prince handy in the form of Boris, (Joseph Dennis), lollygagging and at loose
ends in the provinces

Ms. Moore is a mature woman and Dennis is a young man, but the mismatch in
ages only accents the absurd of their relationship, while their voices, more
sumptuous and powerful than those of the second cast’s Corinne Winters
and Scott Quinn give them ever greater emotional clout as the drama
deepens. 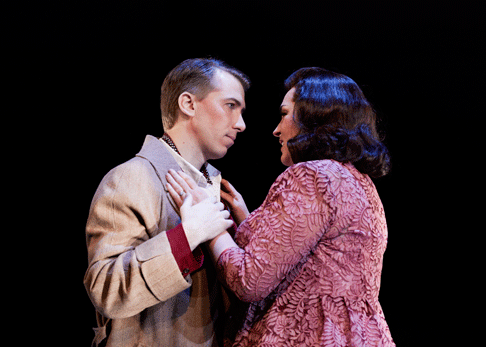 The power of the production is mightily enhanced from the pit. When a show
is this well sung and acted throughout, it’s easy to forget the challenge
for non-Czech singers in this repertory. I have no idea if a Czech speaker
would find their delivery “authentic,” but they convinced me
completely, and their attack and confidence can only be the result of the
conducting of Oliver von Dohnànyi.

His is one of the proudest names of the last century in Central Europe. I do
not know if Von Dohnànyi is related to the great musicians and statesmen
whose name he shares, but his artistry is worthy of his name. Seattle Opera and
Seattle audiences are lucky to have him.

They are also fortunate in the rest of the cast. The thoughtless young
lovers Varvara and Kudrjas are taken in both casts by Maya Lahyani and Joshua
Kohl in rather genre-generic musical-comedy second-couple fashion, but both
sing very well; Nicky Spence and Stefan Skafarowsky make the most of their tiny
roles. look forward to seeing them all in future productions.

Above all, let’s have Janacek Bring back: It’s been more than 25
year since we saw Cunning Little Vixen. Thanks to this fine show and
above all to maestro von Dohnanyi, we’re prapared for The Macropolos
Affair and From the House of the Dead!

All other photos by Philip Newton