When Les fÍtes d’HÈbÈ appeared in 1739 Rameau was at the height of
creative powers and popularity. Masterpieces such asHippolyte et Aricie, Les Indes galantes and Castor et Pollux had flowed from his pen in the preceding few
years, and Les fÍtes d’HÈbÈ was one of his most acclaimed works
during his lifetime, receiving nearly 400 performances after its premiere,
before gradually fading from the repertory following the composer’s death
in 1764.

It seems incredible, therefore, that Les fÍtes d’HÈbÈ has not
previously been staged in the UK. All credit, then, to the combined forced
of the Royal College of Music, the AcadÈmie de l’OpÈra national de Paris,
and the Centre de musique baroque de Versailles for bringing Rameau’s
charming, colourful ‘entertainment’ to London for the first time.

Les fÍtes d’HÈbÈ
presents considerable challenges, though, and not all the outcomes were
successful. First, the ‘tale’ Rameau tells is slight, the three parts
hanging together by the slenderest of threads. HÈbÈ, the goddess of youth
cupbearer of the gods, is bored with life on Olympus and irritated by the
unwanted amorous advances of Momus. So, with her retinue of Graces, she
wings it down to earth in search of other delights, alighting on the banks
of the Seine, where Cupid advises her to mount a spectacle in celebration
of the three talens: ‘la poÈsie’, ‘la musique’ and ‘la danse’.

(And, indeed, where better than the environs of L’OpÈra to enjoy such
‘talents’, for in the early eighteenth century, with the Revolution still
fifty years away, this Parisian institution remained the preferred
gathering place for high society and intellectuals, and a symbol of the
glory of the French monarchy.)

So, much like the English masque, the opera-ballet has no plot worth
mentioning but lots of visual spectacle and flamboyance together with
elaborately engineered stage effects. Can the refined aesthetic of the
eighteenth century – the highly ornamented and stylised cadences, the
gentle artifice, the convoluted ‘narrative’ – be made appealing to
twenty-first-century audiences? 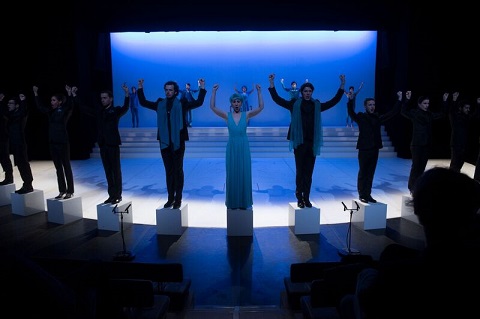 With a budget considerably less than that enjoyed by FranÁois Boucher when
he supervised the set designs at the Palais-Royal theatre in 1739, Thomas
Lebrun (director, set designer and choreographer), FranÁoise Michel
(lighting designer) and Laurianne Scimemi Del Francia (costume design) went
for a minimalist, colour-themed approach, bathing each of the acts in a
single hue – blue, yellow and red – and adding some bucolic projections.
The result was stylish and clean, but not particularly helpful in terms of
communicating who was who and what they were doing as they repeatedly and
randomly moved small white blocks about the stage. The cast is large and
the singers and dancers reappear in different roles. It all looked pretty
but I didn’t have much idea what was going on.

Lebrun’s choreography was fairly abstract but lithely danced and not
unappealing. It didn’t seem designed to serve a ‘dramatic’ function,
though. The modern idiom was also somewhat at odds with the musical
aesthetic, in a work in which dance, song and choruses come and go with
integrated fluidity. Some of the abundant dance numbers are adapted from
harpsichord pieces Rameau had previously published and the music is
ravishing. One can agree with Charles Burney who wrote in 1789, ‘More
genius and invention appears in the dances of Rameau than elsewhere,
because in them, there is a necessity for motion, measure, and symmetry of
phrase.’ However, Lebrun did place the ballet, particularly in
Terpsichore’s final apotheosis of the art of dance, at the heart of the
entertainment, and sequences such as that which accompanied the Oracle’s
announcement of Tyrtaeus’ victory in the second act were absorbing. 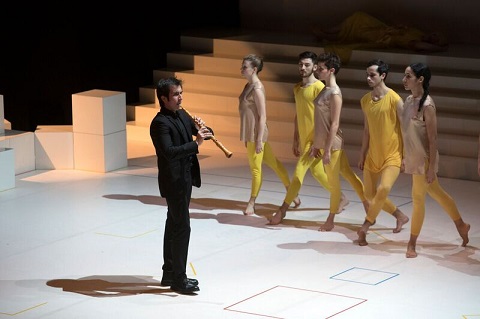 The original cast comprised some of the greatest French singers of the
period, and the vocal performances here confirmed that there is a lot of
talent in the conservatoires of France and the UK. Rameau’s vocal writing
is elegant, expressive and well-placed for the singers if rather lacking in
variety and range of character. On the whole the soloists coped well with
the curlicues and artifice though inevitably they struggled to imbue much
depth into the characterisation. Adriana Gonzalez displayed a rich, plump
soprano as Sapho/Iphise while Pauline Texier soared smoothly at the top as
HÈbÈ in the Prologue and was an engaging …glÈ in the final Act, wooing Juan
de Dios Mateos’ arrogant Mercury with charming persistence. Tenor Joel
Williams revealed an alluring voice as Oracle/a stream (there’s a part for
‘a river’ too …), and Eleanor Penfold, a Naiad, joined him in a delightful
duet in Act 1 during a fÍte galante mounted by Sapho to
celebrate their reunion. Tomasz Kumiega displayed a sure sense of the
style. The French chorus (directed by Olivier Schneebeli) were terrific.

Conductor Jonathan Williams pushed things along at quite a lick, sometimes
at the expense of the intonation and the insistent pace could not have
aided the singers’ efforts to inject some depth into their roles. Moreover,
pastoral needs a little more languor; and the small string section of the
Royal College of Music Baroque Orchestra inevitably could not summon the
richness that Rameau’s original audiences must have enjoyed.

Can a modern audience be made to care about the amorous shenanigans of
Sapho, Iphise and Mercury, or be absorbed by injustices and restorations
among mythical kings and deities? Probably not. The French baroque opÈra-ballet is an acquired taste and one not naturally
suited to modern palettes. But, this ambitious production offered visual
and aural enjoyment and the three collaborating institutions should be
lauded for their efforts and for bringing Les fÍtes d’HÈbÈ to
life.