Adrianne Pieczonka has one of the most beautiful, best-schooled soprano voices in the world. Her technique is rock solid, and she is capable of producing thrilling, pointed high notes, freely and effortlessly hurled over the full orchestra, pinging off the back wall with stunning resonance. Ms. Pieczonka also sports a delectably creamy, lustrous middle voice and descends effortlessly into a secure chest register. She is a sensitive and committed interpreter. And hers is an attractive and poised stage presence.
While all of Adrianne’s significant gifts were on ample display as Tosca, there was a coolness of approach that did not adequately suggest the tempestuous, variable moods of the fictitious diva. Her beautifully voiced Vissi d’arte seemed to owe more to Mozart’s poised Porgi amor that to Puccini’s tormented title character. Still, I am always grateful for any chance to hear this distinguished soprano and it cannot be disputed that her tonal beauty and musicality place her among the top tier of current practitioners.
Marcelo Puente has all the right attributes for a first rate Cavaradossi: ringing tone, sensitive phrasing, handsome physique, and a rather endearing Corellian self-absorption. When Mr. Puente is singing beautifully, which is often, he sometimes conveys an assuredness that he knows you must know it too. There was an initial darkness to the tone that vanished as the show went on. The slight cover and rapid vibrato that characterized Recondita armonia were completely gone by the time E lucevan le stelle rolled around, when his beautifully rendered diminuendo effects made it the high point of the evening. I suspect we will be hearing much more about him, especially if he can concentrate more on collegial “acting” than “starring.” 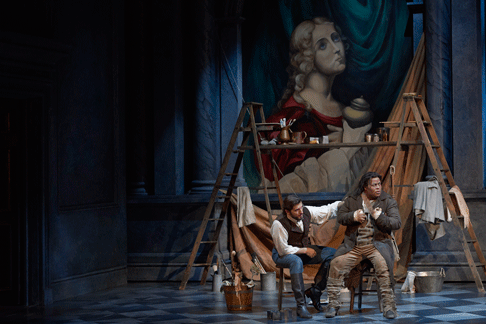 (l-r) Marcelo Puente as Cavaradossi and Musa Ngqungwana as Angelotti [Photo by Michael Cooper]
Markus Marquardt did all the right things as Scarpia, and his interpretation was more nuanced than most. In a smaller European house, I would suspect Mr. Marquardt’s suave baritone would have more impact than it did in this large theatre, up against a tenor and soprano with more heft in their sound than his. Anyone (like me) who ever experienced a steamroller of a singer like Cornell MacNeil in this iconic villainous role has perhaps been spoiled forever. I admired Markus’s taste and intelligence, but I am not sure those are the prime requirements for a notable Scarpia.
Donato Di Stefano offered a nicely sung, if rather understated performance as the Sacristan, which was at least blessedly free of caricatured mannerisms. As Spoletta, Joel Sorenson’s bright tenor and wiry, animated stage deportment brought more (favorable) attention than usual to this comprimario role. Mr. Sorenson was well complemented by Giles Tomkins’ solidly sung Sciarrone. Bruno Roy was an uncommonly sympathetic Jailer, and Clara Moir’s pure-toned, off stage Shepherd Boy was serenely rendered. Musa Ngqungwana has an orotund, mellifluous bass-baritone that made quite an impression as Angelotti. However, Mr. Ngqungwana was unduly hampered by some awkward staging.
“Awkward staging” being the operative phrase. I have often admired director Paul Curran’s work. On this occasion, Mr. Curran seemed to be more concerned with manufacturing new and clever stage business than with developing character relationships. So, fine, Tosca tears up Cavaradossi’s paper ‘studies’ for the Attavanti Madonna, but does she have to throw them in the air like a giggly schoolgirl? 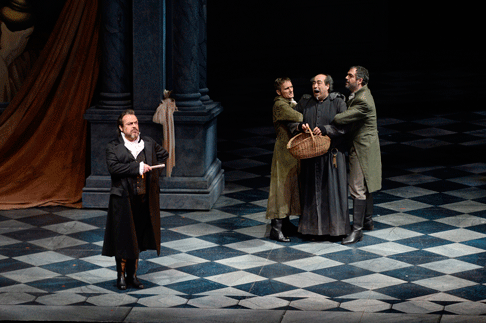 (l-r) Markus Marquardt as Scarpia, Joel Sorensen as Spoletta, Donato di Stefano as a Sacristan and Giles Tomkins as Sciarrone [Photo by Gary Beechey]
The entire first encounter between the lovers was juvenile and shallow with no hint of the subtext that deception and jealousy will soon undermine the fates of both characters. Too often, singers faced front and sang to the balcony, when they should have been making a connection. When Mario sings of (I paraphrase) “seeing the world in Floria’s eyes,” he sings it to the parterre, when he should be, well, looking in her eyes. For all of the truly inventive touches, the sad fact is that Mr. Curran has failed to ignite any chemistry or passion.
And that is a pity, since the striking set and costume designs by Kevin Knight are all that could be desired. Monumental, striking scenery provided a visually fresh take on this operatic warhorse. I especially like the padded torture room that was revealed when a massive cabinet was pulled out from the wall in the Farnese Palace. Mr. Knight’s costumes were also spot-on, although I could have done with one less shawl on Tosca’s Act Two gown. Shedding one was illuminative of her character’s situation. Shedding two somewhat smacked of molting. David Martin Jacques’s well considered lighting design was all that could be wished. His isolation of Tosca in Act Two and Cavaradossi in Three for their big solos was subtly effective.
Best for last: In the pit, Maestra Keri-Lynn Wilson provided the real drama of the night. Ms. Wilson inspired this fine ensemble to fill in all the conflict, emotion and color that were missing from the stage. Whether playing solo or collectively the orchestra produced a stylish reading of a score, rich with detail and infused with dramatic fervor. Sandra Horst’s chorus contributed mightily with their full-throated Te Deum.
There were many elements to admire in this well-intended performance of a reliable classic. In the end, it left me wishing for much more inspired ‘shock and awe’ from this capable assemblage.
James Sohre