Francesca Zambello has had considerable success staging the piece for other notable companies, and as evidenced by this richly detailed production, she has honed her insights to a finely polished interpretation. Ms. Zambello occasionally likes to flavor her operas with musical comedy flair and it does not go amiss here.
When appropriate, she enlisted choreographer Eric Sean Fogel to lighten up the mood with well-considered moves that emerge organically from exuberant revelers. Mr. Fogel’s staged movement was not only entertaining in its own right, but also greatly deepened the violent, tragic moments by providing good contrast. The only false move was the series of woozy cakewalk kicks at the climax of There’s a Boat That’s Leavin’ Soon for New York. It seemed out of character to have a weakened, drugged up Bess this frolicsome as she is slimily lured against her will by the pimping Sportin’ Life.
Ms. Zambello’s Catfish Row is peopled by a bustling, believable vitality that communicated a powerful sense of community. When David Moody’s scrupulously prepared chorus launched into their many big choral numbers, the Thrill-o-Meter needle jumped off the charts. Francesca has built strong individual characterizations with each cast member, and has nurtured relationships that are marked by honesty and clarity. The sense of directorial focus and readily comprehensible storytelling that emerge out of this rich mosaic of dramatic moments is nothing short of brilliant. 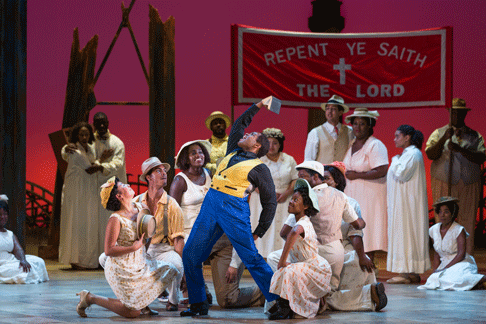 Frederick Ballentine as Sportin’ Life with members of the ensemble
When Peter J. Davison’s imposing set is first revealed behind a front scrim, glowing hauntingly in Mark McCullough’s splendid lighting design, the audience burst into appreciative applause. Mr. Davison’s massive two story structure has rows of doors on each level, the upper balcony reached by a spiral staircase down right. This walkway extends to a large, barnlike building up left, with Porgy’s residence on ground level. A huge barn door, contained in the stage left wall, is opened and closed with import at key dramatic moments.
There is a wonderful chiaroscuro effect to the structures, the walls dotted and layered with rusting squares of sheet metal. For the storm scene, we are in a community hall with chairs and a table, defined as a huge wall flies in cutting the depth of the stage in half. Black plastic blows in the windows, augmented by Mr. McCullough’s threatening lightning. Sporadic dropping, banging and dangling of metal squares that had been “blown away” added fearful unpredictability to the chaotic effect.
The team has also “opened up” the action by flying in a partial wall and adding a bed to take us inside Porgy’s room. This allowed for a very focused private moment for both of the big duets. Another outstanding re-imagination was the conception of the Kittiwah Island setting as a neglected, gone to seed beachside amusement park. Sportin’ Life interrupts a holy roller baptism session to deliver his irreverent It Ain’t Necessarily So. To complete the dynamic look of the production, Paul Tazewell contributed the comprehensive costume design ranging from homely everyday attire, to Sunday-go-to-meetin’ finery, to splashes of garish color for Bess and Sportin’ life.
John DeMain kept things humming in the pit from the opening slashes of brass licks to the final stirring chorus. Under Maestro DeMain’s assured baton, this well-paced reading of Gershwin’s evergreen opera never sounded fresher. Having such a prodigiously talented cast sure didn’t hurt either. 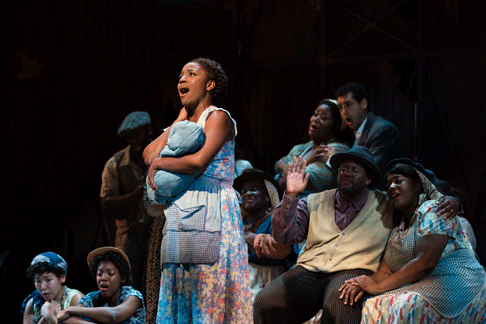 MeroÎ Khalia Adeeb as Clara
Musa Ngqungwana is such a force of nature as Porgy, with a voice of such jaw-dropping beauty, richness, and power that he just might become a household name. Practice saying Ngqungwana now, because his star is only going to go higher and higher. Musa has such a big, beaming, lovable open face that you are not quite prepared for his ferocity when he is goaded to confront evil. His painful limping gait, his superstitious negative fantasies, his loneliness, his compassion, his utter devotion to Bess; there is no aspect of this complicated role that he does not serve with uncommon distinction. If I had to comprise a short list of the show’s highlights, it would be: Whenever Musa Ngqungwana is on stage.
Talise Trevigne makes an equally strong case for Bess, bringing star power to her well-considered interpretation. Her confident, glimmering soprano beautifully encompassed some of the work’s best-known melodies. Ms. Trevigne brought committed acting to the mix, and she found all the necessary extremes to this unstable, emotionally volatile character. Her singing is pliable and expressive in all registers and volumes, and she judiciously uses her chest voice to serve the desperate lower pleas in What You Want With Bess? Talise and Musa are wonderfully paired, exuding a good chemistry. Bess, You Is My Woman Now was so heart rending to see, so ravishing to hear that I thought the show might never get going again from the prolonged, cheering ovation at its conclusion.
Norman Garrett’s incisive, booming bass and lanky, lean, mean intensity made for a knockout performance as Crown. Frederick Ballentine’s serpentine take on Sportin’ Life was relentless in his bad-ass persona. Although Mr. Ballentine’s dancing was fleet of foot and his secure tenor pleased the ear, we never forgot that beneath the cynical comic overtones in the music, there was an unrepentant, unwavering criminal. Serena has one of the most overtly “operatic” solos, and Simone Z. Paulwell’s throbbing, well-schooled soprano made My Man’s Gone Now a plangent lament marked by velvet tone and utter commitment. 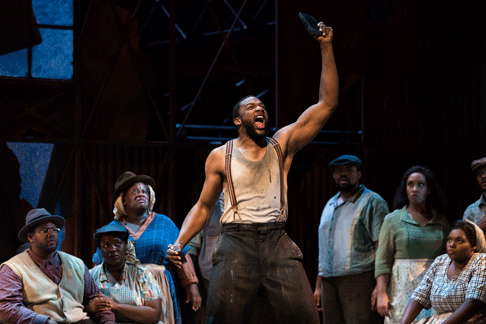 Norman Garrett as Crown
Meroe Khalia Adeeb has the most famous tune in the show, and her fresh, floated, silvery soprano made for a bewitching Summertime. Justin Austin’s honeyed baritone was well suited to the role of Jake. Chaz’men Williams-Ali has such a pleasing, vibrant tenor that it was a shame to lose him early on as the ill-fated Robbins. Happily, he snuck back in action later with a playful turn as the Crab Man. Judith Skinner struck just the right balance of brassy chest tones and cutting head voice to offer a well-rounded impersonation of Maria.
The enduring popularity of Porgy and Bess combined with the lovingly staged, magnificently performed production at hand deservedly made it a sell-out success. But I have to wonder, with all the stellar African-American talent filling the stage, where was the black audience? I wouldn’t even need to use all my fingers to count the African-Americans in the parterre seats at my performance. If opera is to sustain itself as an art form, it’s a question producers are going to have to answer. And if anyone can, my bet is on the resourceful Glimmerglass Festival.
James Sohre