The roles of OrphÈe, Eurydice, and Amour are sung by Dmitry Korchak, Andriana Chuchman, and Lauren Snouffer. Dance sequences are performed by members of the Joffrey Ballet. The Lyric Opera Orchestra is conducted by Harry Bicket, while the Lyric Opera Chorus has been prepared by its Chorus Master, Michael Black. The director and choreographer of this new Lyric Opera co-production, shared with the Los Angeles Opera and the Staatsoper Hamburg, is John Neumeier. Sets, costumes, and lighting are also the creation of Mr. Neumeier. Debuts at Lyric Opera of Chicago are being made by Mr. Korchak and by members of the Joffrey Ballet.
During the overture a pantomime associated with the title couple exemplifies those changes behind the substance of Mr. Neumeier’s reinterpretation of Gluck’s opera. OrphÈe – now playing the role of a choreographer – enters in modern casual dress from stage rear to rehearse a ballet based on Arnold Bˆcklin’s 1880s painting, “Die Toteninsel” (“The Isle of the Dead”). A reproduction of one version of the painting remains on an easel at stage right. Soon a quarrel ensues with his spouse Eurydice, who also plays the role of lead female dancer in OrphÈe’s troupe. Eurydice responds with indignation and storms out of the rehearsal. The sonic and visual presence of an automobile indicates Eurydice’s accidental death, just as OrphÈe remains downstage left perusing his performance notes. Once the horrible realization of Eurydice’s death is communicated, the overture has ended and OrphÈe’s manifest grief, as well as the opera proper, commences.

During the first scene of lament OrphÈe is surrounded by dancers representing the nymphs and shepherds from Gluck’s score. We hear the choral declamation, “Il soupire, il gÈmit” (“he sighs, he moans”), although the members of the chorus are positioned offstage. We do, however, see and hear the plaintive, distended cries of OrphÈe, as Mr. Korchak injects a sense of anguished loss into his repeated cry, “Eurydice!” At his appeal, “couvrez son tombeau de fleurs” [“cover her tomb with flowers”], the dancers indeed respond with multiple offerings, until OrphÈe begs for solitude and contemplates alone the significance of Eurydice’s departure. In his solo, “Objet de mon amour” [“Object of my love”] Korchak continues his lament with regular forte pitches, whereas some differentiation would render more credible the spirit of his “air en rondeau.” Korchak’s motion toward an artificial tree positioned left suggests his roaming “through the vastness of the woods” while he closes his thoughts with a nascent trill taken piano. In this production the choreographer OrphÈe’s assistant assumes the part of Amour. Ms. Snouffer’s approach to both the character and his music provides a soothing balm to OrphÈe’s mighty suffering. In her well-known aria, “Si les doux accords de ta lyre” [“If the sweet tones of your lyre”] Snouffer performs with liquid tones and a sensitive application of vibrato. Her voice glides through the melodic line while inserting subtle variations in keeping with expectations of the period. Encouraged by this bright evocation of a happy turn of events, OrphÈe resolves to seek out his Eurydice in a descent to the underworld. In the aria “L’espoir renaÓt dans mon ‚me” [“Hope is reborn in my heart”], composed by Gluck as a supplementary number for the French version of 1774, the performer is challenged to strike both an heroic and a self-reflective tone. Korchak is here convincing in heroic sentiments, such as “Les monstres du tartare ne m’Èpouvantent pas!” [“the Tartaren monsters hold no terror for me!”]. Yet in lighter passages there could be greater attention layered onto the performance of runs and vocal decoration, both of which should add to the beauty and the strategic function of this aria. 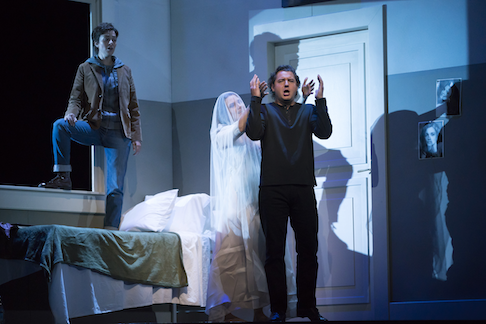 Lauren Snouffer, Andriana Chuchman, and Dmitry Korchak
After having been apprised by Amour of Jupiter’s conditions for the successful retrieval of Eurydice, OrphÈe beings his descent in Act II. A backdrop of mirrors alternates, in its reverse, with a large representation of the Bˆcklin painting. Shortly after the interplay of choral voices and dancers at this brink of the underworld, OrphÈe sings a second, major number. Dancers assuming the roles of furies, specters, and demons move rhythmically at the approach of the mortal. With the appeal, “Laissez-vous toucher par mes pleurs” [“Let me move you by my tears”] he attempts to gain admission to their realm. Despite repeated choral responses of “Non, non, non,” OrphÈe persists in pleading until “the Specters express their having been moved”. At the words “La tendresse qui me presse, Calmera votre fureur” [“The tender love which I feel will calm your fury”] he wins their permission with the sweetness of his song. Of his predominantly solo passages Korchak performs here with the most noticeable assurance. The moderate tempos furnish Korchak’s vocal timbre sufficient opportunity to linger effectively and produce lyrical variation on those lines which will win over the opponents of his quest. Once OrphÈe enters past the dancing spirits into the equally mobile underworld, he is astounded by the tranquility of the Elysian Fields. The pastel shades of costumes and scenery, as well as the slower, multiple dance movements, contribute to the atmosphere of “bonheur” [“happiness”], as described by one of the blessed spirits. OrphÈe’s complementary, piano lines shift suddenly to a loud outburst, as Korchak declares, “Mais la calme qu’on y respire, Ne saurait adoucir mes maux” [“But the calm which I breathe here cannot alleviate my pain”]. By the close of the act Eurydice is led by and among the dancing spirits to rejoin her “tendre epoux” [“tender husband”], both of whom join in the collective movement.
During the attempted departure from Elysium in Act Three the tension between protagonists increases after the initial, happy reunion. Chuchman’s impressive command of the tender, yet insistent vocal line continues through to a duet with OrphÈe. As an effective gesture they stand back to back while communicating without sharing a glance. After they fail, however, to maintain the command of the gods, Eurydice is whisked away by the spirits at her gasp, “‘ ciel, je meurs!” [“O heavens, I am dying”]. OrphÈe’s famous reaction, “J’ai perdu mon Eurydice,” [“I have lost my Eurydice”] is sung by Korchak with effective, soft tones in slower passages, yet with variable pitch in some of the faster, decorated lines from the enhanced, later version of the score. The dancers return to rehearsing a ballet in studio in the concluding scenes, with the beloved memory of Eurydice remaining in OrphÈe’s heart. Ultimately Gluck’s music, and the association of the character OrphÈe with the spirit of music, defines any production of this opera, just as George Bernard Shaw reminds his readers of Gluck’s “perfect union of the poem and the music.”
Salvatore Calomino