Conductor Oliver Zeffman is taking the members of the Melos Sinfonia – the
ensemble which he founded at the age of just sixteen – and a cast of young
soloists (Lauren Fagan, Ross Ramgobin, Patrick Terry, Bethan Langford and
Nick Pritchard) through their paces as they prepare the

of the opera that they will present in Cambridge, London and St Petersburg
in the coming days.

In contrast to many new operas, Written on Skin has not been
condemned to post-premiere obscurity and since the first production at Aix
in 2012 it has travelled far and wide, receiving two stagings at Covent
Garden, in 2013 and

. I ask Oliver Zeffman what drew him to the opera – which, with its large
orchestra which includes a panoply of percussion, glass harmonica and bass
viol among its coloristic palette, presents considerable logistical
challenges. A semi-staged performance at the Barbican in 2016 with composer
Benjamin conducting the Mahler Chamber Orchestra evidently had him hooked:
Oliver passionately extols – at the breakneck tempo which is evidently his
default mode – the riches of the score and, most especially, the disturbing
‘precision’ of Martin Crimp’s visceral libretto, offering snatches to
illustrate: ‘Strip the cities of brick’, ‘Push our love into that man’s eye
like a hot needle. Blind him with it! Make him cry blood!’

Reviewing Written on Skin at the ROH in January this year, I
described it as ‘spare, harrowing and unsettling’. Crimp’s tale blends
sensuality and sadism, retelling a medieval Provence legend from a
contemporary vantage point. The librettist himself has described his
‘instinctive desire to allow our contemporary world to bleed through the
drama. Hence my invention of the 21st century angels who initiate and
provoke the action and even – in the case of the Boy enter into it’, and we
are constantly shifted from medieval to modern by reference to contemporary
settings such as a shopping mall or a ‘Saturday car park’. The text
juxtaposes the religious with the erotic and conjures a poetic register
which is both timeless and of our time; refined yet ruthless. The shocking
close of the opera perfectly illustrates this, as Agnes taunts her abusive
husband, The Protector, who has just forced her to eat her lover’s heart:
‘No force you use, nothing you forbid, can take away the pictures that
Boy’s hands draw on this skin. He can unfold the tight green bud, unwrap
the tree, darken the wood, lighten the sky, blacken the dust with rain –
each mark he makes on me is good – each colour clear.’

I enquire about the particulars of the Melos’ planned staging. Oliver seems
happy to leave the dramatic decisions to Jack Furness, founder and Artistic
Director of Shadwell Opera – he says that it’s important to trust the
people with whom you’ve chosen to work – but explains that although the
Melos Sinfonia will present a ‘concert staging’, the direction will
delineate the action of the text precisely for the audience. It strikes me
that there is a ‘quasi-ceremonial’ quality about Written in Skin,
as the vocal arioso slowly unfolds, as incisive as the text itself, which
lends itself to a concert staging format. Indeed, the libretto incorporates
narrative, as the characters explain and describe their own actions: ‘The
Boy takes from his satchel an illuminated page’, or ‘The Protector wakes up
…’ 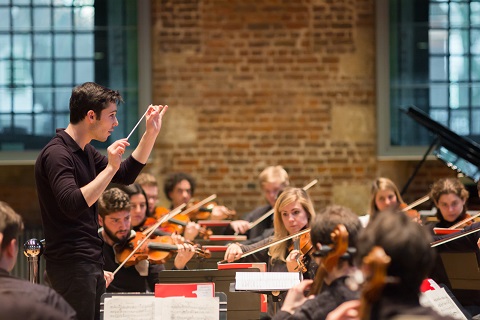 It seems apt, too, for Oliver – still only twenty-five – to be performing
the music of George Benjamin, who was himself similarly precocious and full
of initiative, travelling – at the age of sixteen – to Paris each month to
study with Messiaen at the Conservatoire, and earning a contract with Faber
when still a teenager. Benjamin went on to studies at Cambridge with
Alexander Goehr and Robin Holloway. Oliver’s undergraduate life began at
Durham University where he initially studied History, before adding
Russian, a move which saw him spend a year in St Petersburg where he became
fluent in the language and studied at the Conservatory under the direction
of Alexander Polishchuk: ‘harmony, analysis and useful things like that’,
he says, ‘I had had very little proper grounding in those kind of things
before SPB and they were incredibly important for me to study, both there
and at RAM.’ He also made the sort of contacts which have clearly been
crucial in determining his future path.

After graduation, further studies followed at the Royal Academy of Music;
he was the youngest of eight nominees for the NÈstle-Salzburg Young
Conductor’s Award in 2015, though he makes light of the question of
‘technique’, telling me that if a conductor really knows the score then
their baton will communicate. He admires the work of Valery Gergiev – who
has been an important mentor and who has invited the Melos to perform Written on Skin at the Mariinsky Theatre – and when I criticise
the Russian maestro’s ‘hand-fluttering’ gesture which I struggle to
interpret when watching Gergiev conduct, Oliver immediately rebukes me for,
he says, it can really work. ‘If you have your own way of communicating
something to the orchestra, however unconventional, and it succeeds in
communicating what you want, then it shouldn’t matter what it looks like to
the audience. It’s about the resultant sound – which is the main goal – and
whether you can affect the sound the orchestra makes in the ways you want
with your gestures, whatever these might be.’

I ask Oliver why he felt the need to establish his own orchestral ensemble
at such a young age. As a violinist (‘not very good’ he says – though these
things are surely relative!) in the London Schools Symphony Orchestra, he
wanted to try his hand at conducting, but as no-one is going to ask a
sixteen-year-old to conduct he just got on with things for himself.
Originally, the ensemble comprised chiefly musical ‘friends and family’,
but gradually his musical network expanded. Casting an eye over the
programmes performed during past seasons, it’s interesting to see how the
scope, ambition and innovativeness of the Melos’ music-making have evolved.
Operas have included Mozart’s The Impresario, Walton’s The Bear and Rachmaninov’s Aleko. There have been world
premieres of music by Philip Ashworth, Joel Rust, Edward Nesbit, Arthur
Wabel and others. Unusual works are paired together. Oliver introduces a
culinary metaphor: it’s like when you’re cooking at home and you’ve got the
basic dish and you think, ‘what would go with this?’, and experiment a bit.
So, Andrzej Panufnik’s Cello Concerto might be programmed alongside the UK
premiere of Myaskovsky’s Symphony No.27; or, Walton’s FaÁade might
share the billing with Peter Maxwell Davies Eight Songs for a Mad King.

One of the Melos Sinfonia’s major projects has been the fostering of a
‘cultural dialogue’ between the UK and Russia, which has involved several
tours to Russia – the ensemble has appeared as part of the International
Conservatories Festival and the Sound Ways Festival, and performed in
venues including the Mariinsky Theatre, the St Petersburg Philharmonia and
St Petersburg State Conservatory – and the commissioning of new works from
both British and Russian young composers. An important element of this
exchange has been giving Russian audiences the opportunity to hear
unfamiliar works: thus, Russian premieres have been plentiful and eclectic
– Ligeti’s Aventures & Nouvelles Aventures, Dmitri Smirnov’s Dream Journey, Alexander Goehr’s Triptych, Salvatore
Sciarrino’s Lo spazio inverso, Holst’s Savitri and Colin
Matthews’ Divertimento, to name but a few. Oliver insists that
Russian audiences are more open-minded than those in the UK: the latter tend
to opt for programmes of music with which they are already familiar, or
whose composers are personal favourites, whereas Russian audiences are
eager to open their ears to the new – although, paradoxically, he says that
he encountered little contemporary Russian music in concert halls during
his one-year sojourn in the country.

For a twenty-five-year old, Oliver has built up an impressive list of
achievements and experience. He has worked with the Deutsches
Symphonie-Orchester Berlin, assisting conductors such as Ed Gardner, David
Zinman and Manfred Honeck, rehearsed Mahler’s Symphony No.8 with the New
Japan Philharmonic for Daniel Harding, and recently prepared the Luxembourg
Philharmonic Orchestra for concerts with Valery Gergiev in a programme
including Berlioz’s Symphonie Fantastique. 2017 has been a busy
and exciting year. In the summer, he made debuts both at West Green House
Opera conducting Mozart’s Die Entf¸hrung aus dem Serail and with
the Orchestre National du Capitole de Toulouse. In the coming months he
will again work with Gergiev, preparing the Rotterdam Philharmonic for
performances of Mahler’s Symphony No.7, and in the summer of 2018 he will
work with the LA Philharmonic, assisting Gustavo Dudamel and others, at the
Hollywood Bowl.

To be honest, one hour in Oliver’s company was exhilarating but exhausting!
The clichÈ ‘force of nature’ really does seem apposite. No sooner had the
rehearsal at St Cyprian’s ended than he was among his players, chatting and
thanking them as he collected in parts, folded music stands, disassembled
percussion instruments. Alongside concert-planning and conducting, he adds
administration and fundraising to his responsibilities. He seems genuinely
surprised when I suggest that taking seventy musicians to Russia is an
adventurous logistical exercise. After our meeting, I reflect back on
Oliver’s response when I had asked about his music-making activities at
Durham: he doesn’t seem to have been heavily involved in the undergraduate
music scene, and explained that there was a prevailing attitude of ‘this is
the way it’s always been’. Oliver is clearly not one to let ‘convention’
stand in his way; if there is music that he wants to play – more Sibelius,
Tchaikovsky and Richard Strauss’s tone poems are on his wish-list – then
you can be sure that he will, and to acclaim.