The mortal twins Siegmund and Sieglinde are Brandon Jovanovich and Elisabet Strid. Hunding is sung by Ain Anger and Fricka by Tanja Ariane Baumgartner. The sisters of Br¸nnhilde are portrayed by Whitney Morrison, Alexandra LoBianco, Catherine Martin, Lauren Decker, Laura Wilde, Deborah Nansteel, Zanda äv?de, and Lindsay Ammann. The Lyric Opera Orchestra is conducted by its music director Sir Andrew Davis. The production is directed by David Pountney with scenery by Johan Engels and by Robert Innes Hopkins, costumes by Marie-Jeanne Lecca, and lighting by Fabrice Kebour. Mmes. Strid and LoBianco and M. Anger make their debut at Lyric Opera of Chicago in this production.
As the curtain rises Wotan appears briefly while holding his spear of authority and justice. During the orchestral introduction the ash tree, into which Wotan had previously plunged his sword, descends onto the stage into the midst of Hunding’s dwelling. Figures representing the three Norns and assistants push Hunding’s domestic table into place; Sieglinde, now alone, moves about, held by an extended chain attached to the tree. As a door at stage rear opens, Siegmund stumbles into the presumed haven. Visibly worn by battle, Mr. Jovanovich utters the lines “Hier muss ich rasten!” (“I have to recover here!”) with a gasp of desperate hope. Ms. Strid’s reaction shows an immediate sympathy for the weakened man seeking refuge. Her vocal color and range are ideal in portraying Sieglinde’s solicitous curiosity and her subsequent statements to Siegmund describing her own plight. From low pitches on “ihn muss ich fragen” (“I must find out where he’s from”) to the higher, palpable emotion with which she sings “noch schwillt ihm der Atem” (“I hear him still breathing”), Strid invests her lines with an anticipation matching the introductory tone set by Jovanovich. The refreshment of water once provided is followed by a lush orchestral performance of the love motif under Davis’s taught direction. In Sieglinde’s identification of home and self as “Hundings Eigen” (“belonging to Hunding”) Strid’s words are fraught with tension. Once both characters drink from the mead-vessel, Jovanovich’s voice blooms with noble color in describing his flight from the pursuit of “Misswende” (“ill fate”). In response to Sieglinde’s tentative yet clear invitation, the hero names himself “Wehwalt” and declares with assured resolve, “Hunding will ich erwarten” (“I intend to await Hunding here”). At the close of the scene each character sits alone at the base of a tower positioned on opposite sides of the stage, an indication of burgeoning attraction stunted by the domestic atmosphere and spirit of Hunding.

The entrance of Hunding, the lord and husband, injects a tone of caution and formality into the closed interior of the dwelling. Mr. Anger’s deep, resonant intonation emphasizes Hunding’s suspicion while asking after Siegmund and later during his visual comparison of the guest to Sieglinde. After reassurances of the law of hospitality, expressed by Anger with rich vibrato, Siegmund is encouraged to name himself. Upon complying, Siegmund also volunteers the story of his youth in the forest together with his father Wolfe. Here Jovanovich sings excited pitches on “Zwillingsschwester” (“twin sister”), then drifts to a piano lament at “kaum habe ich sie gekannt” (“I scarcely knew her”) when narrating the disappearance of both mother and sister. While telling of Siegmmund’s progressive isolation from father Wolfe and from potential friend or wife, Jovanovich sings the final line explaining his name with a hushed delivery of “Wehwalt … des Wehes walte’ ich nur” (“Wehwalt … only sadness was ascribed to me”). After describing his battle against a cruel race that tried to force a maiden into marriage, Siegmund’s extended pitches on “Friedmund – nicht heisse!” (“not called – Friedmund!”) identify him as Hunding’s enemy. From this point forward, the focus shifts from the past to an imminent struggle with future consequences. Anger’s chilling notes on “Sippenblut” (“clan’s blood”), and his vow to avenge it against the hero “Wehwalt,” prompts several violent movements. He throws his wife to the floor and demands from her his evening draught. Before departing grimly from the scene, Hunding casts a battle-axe into the communal table. 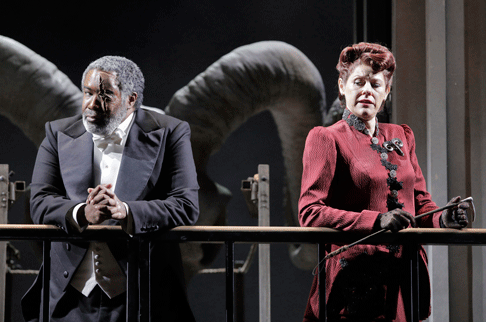