The first Act took a little time to settle. Alexander Joel led the ROH
Orchestra through a pretty work-a-day reading of the overture in which some
unfocused intonation seemed visually symbolised by the precariousness of
Sofia Formia’s vulnerable Gilda, perched high on an extending platform,
peering tragically into the gloom.

The ball scene was less divertissement than downright debauchery. McVicar
leaves us in no doubt of the nature of Rigoletto’s role at the Duke’s
licentious court: he provides ‘entertainment’ in the form of facilitating
violent seduction and rape, and the assault on Monterone’s daughter –
accompanied by hedonist whoops of the fornicating couples and avid voyeurs,
and a vicious prod from Rigoletto’s staff – is played out for all to see.
There’s no sense of a ‘dance’, though there’s plenty of movement, wild and
ugly, as well as much intrusive noise, including the thump of Rigoletto’s
crutches as they stab at the floor. Vale’s leaning, metallic wall – which
swivels to reveal Rigoletto’s tumble-down shack – is a steely silver, an
apt emblem of the emotional coldness and cruelty of this Renaissance den of
iniquity, though Tanya McCallin’s costumes add some welcome colour. 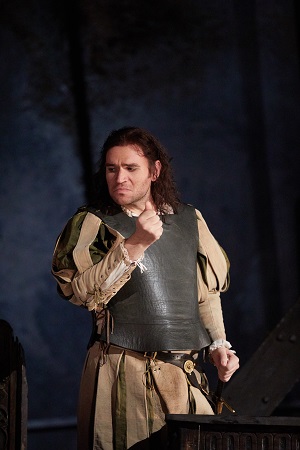 The sense that things might escalate out of control was exacerbated by
disagreements about tempo between stage and pit, which created musical
disequilibrium to match the dissolution of morals. Into this maelstrom,
Michael Fabiano flung a roaring ‘Questa o quella’: there was no doubt of
this Duke’s power and presence. But, the physical and vocal swagger which
characterised Fabiano’s account became ever more coarse, loudness replacing
legato: this Mantuan libertine was certainly a dissolute pleasure-seeker
but there was little sensuality in Fabiano’s singing. There was a tendency
to shout rather than seduce in ‘» il sol dell’anima’ and Fabiano seemed to
make no attempt to imbue ‘Parmi veder le lagrime’ with aristocratic
elegance; his Duke was a thug and his supposed sorrow merely superficial. I
became increasingly puzzled by this interpretation as the performance
proceeded. 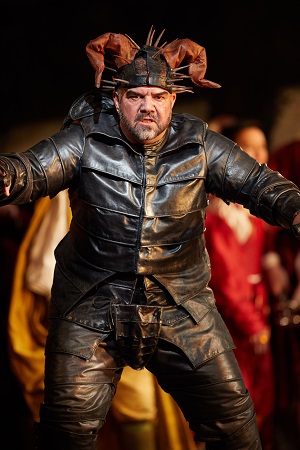 Dmitri Platanias’s leather-clad, crutch-wielding hunchback lumbered and
lurched like an aggressive stag-beetle, his crooked jester’s cap-and-bells
jiggling grotesquely. Platanias baritone was hardened with anger, swelling
with barely repressed rage. Platanias released this fury with fire in
‘Cortigiani, vil razza dannata’ when Gilda is abducted by the Duke’s
courtiers; but, he seemed emotionally disengaged during the father-daughter
duets, absorbed by his own suffering rather than consumed with obsessive
paternal protectiveness. This Rigoletto seemed to take no responsibility
for the tragedy which ensues, and thus garnered little sympathy. 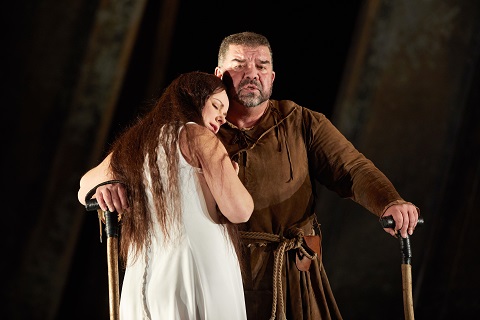 Sofia Fomina has a big soprano and the top notes were powerfully projected,
though a wide vibrato, particularly lower in the range, often caused the
focus of the note to spread. However, dramatically the Russian soprano also
seemed a little detached at times – I wasn’t convinced that this Gilda was
intensely attracted to the Duke, overcome by unconscious, unfamiliar sexual
desire – although Fomina’s commitment in the final scene was unstinting. 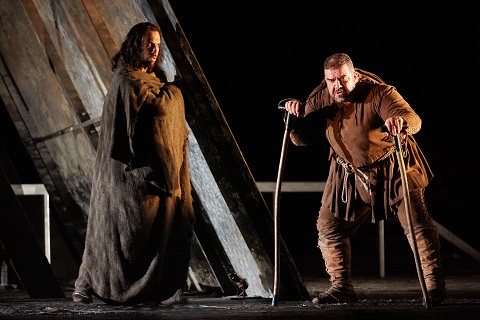 When my colleague, Anne Ozorio, reviewed the

of this production she admired the way McVicar ‘gets to the visceral
drama’. I wouldn’t disagree with that … but, on this occasion, the
bleakness that she notes was unremitting, as neither cast nor orchestra
summoned the genuine, if fleeting, tenderness that tempers the machismo and
malevolence.


This first performance in the run was dedicated to the memory of
Russian baritone Dmitri Hvorostovsky.