And, Almirena’s incredulity might be shared by the audience at the
denouement of Handel’s Rinaldo which, to the common-place
cat’s-cradle of romantic cross-threads adds a swift lieto fine reversal which sees a pair of supernatural and mortal
evil-doers overcome by love – for each other, for their enemies and for the
latter’s Christian god. “O clemency of Heaven!”, “Blessed Fate!”, “Virtue
has triumphed!” cry the elated, conquering Crusaders. “O happy we!” is the
choric conclusion.

Indeed, even Handel’s contemporaries – particularly those English
commentators and musicians who resented the adulation and success that the
newly arrived Saxon composer and the Italianate operatic forms, styles and
singers that he brought with him were enjoying in London – were quick to
ridicule the lavish extravagance and artifice of the first production of Rinaldo, which opened at the Queen’s (later King’s) Theatre on
Haymarket on 24th February 1711.

‘Spectatum admissi risum teneatis?’ ≠- ‘If you were admitted to
see this, could you hold back your laughter?’ – was the epigraph, drawn
from Horace’s The Art of Poetry, that the esteemed essayist John
Addison chose for an article in The Spectator, 6th
March 1711, in which he derided the ‘painted dragons spitting wildfire,
enchanted chariots drawn by Flanders mares, and real cascades in artificial
landscapes’, as well as the sight of ‘Nicolini [NicolÚ Grimaldi, who
created the principal role in both Rinaldo and Amadigi]
exposed to a tempest in robes of ermine, and sailing on an open boat upon a
sea of paste-board!’

But, if Addison delighted in mocking the real-life ‘sparrows’ which took
flight during Almirena’s ‘bird-song aria’ – ‘there have been so many
flights of them let loose in this opera that it is feared the house will
never get rid of them’ – and the need for a team of stand-by firefighters
in case the fireworks which illuminated the lightning and thunder caused a
conflagration, then the London public loved Handel’s setting of the
24-year-old writer-impresario Aaron Hill’s adaptation of Torquato Tasso’s
epic poem Gerusalemme liberate, and didn’t share Addison’s
objections to Giacomo Rossi’s libretto, with its ‘florid … tedious
circumlocutions’.

Although Hill’s resourceful imagination and youthful ambition were not
complemented by financial acumen – failure to pay both the tradesman who
built the set and supplied the costumes and the musicians resulted in the
immediate termination of Hill’s contract to manage the Queen’s Theatre – Rinaldo had a triumphant first-run of fifteen performances and,
re-staged 53 times, it was Handel’s most popular opera during his
life-time. At the Barbican Hall, a fantastic cast of soloists alongside
Harry Bicket’s English Consort showed the capacity audience just why Rinaldo achieved and deserved such success, then and now. 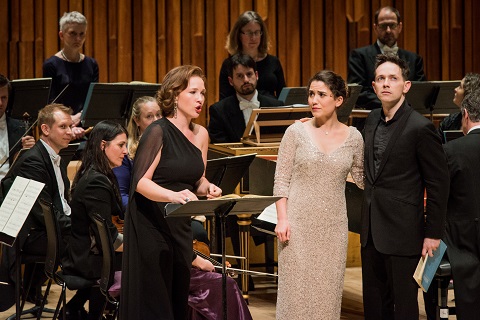 As the eponymous warrior-saviour, Iestyn Davies exhibited all of the
‘infinite variety of colour’ and ‘expressive depth’ which I admired when
countertenor and ensemble shared the Barbican Hall stage for a superb
performance of Handel’s


in 2016 – to which he here added the stamina, expressive compass and
extensive vocal range required to exploit the musical and dramatic
diversity of the eight arias and two duets which Handel composed for
Nicolini. Davies knows this role well and, though this was a ‘concert
performance’, his characterisation and dramatic credibility were unwavering
and as compelling as his singing. From Rinaldo’s first recitative, Davies’
countertenor was imbued with a penetrating dynamism which captured the
hero’s impetuousness, passion and conviction. When the Amazonian sorceress
Armida kidnapped Almirena, disappearing into the black clouds of flame and
smoke which spew from her bellowing monsters, this Rinaldo stared into the
orchestra, in disbelief at his loss, as if some answers could be gleaned
from the spiteful assertions of the instrumentalists’ sinfonia. His grief
found expression in both the beauty and rhetoric of ‘Cara sposa’, in which
Bicket encouraged the strings to make much of their chromatic nuances and
to swell with heartfelt warmth in the ritornelli. Davies ability to sing
through the line with mesmerising communicativeness and expressive
intensity, and his ease of movement across and between registers, was
simply stunning.

And, if the firmness, warmth and expressive sincerity of Davies’ lower
range impressed in this aria, in ‘Cor ingrato, ti rimembri’ it was the
fluidity of both the vocal line and Joseph Crouch’s eloquent, responsive
cello counter-melody that so naturally captured the pain of a heart so
distressed that it must surely break in two. Then, quicksilver agility and
sweetly piercing clarity marked ‘Venti, turbini, prestate’, with leader
Nadjz Zwiener and bassoonist Alberto Grazzi matching the fiery nimbleness
of the vocal whirlwinds. Even at the close, Davies’ countertenor sounded
fresh and vigorous, equal to the challenge not just of matching the might
and majesty of the four trumpets who enliven the triumphant ‘Or la tromba’,
but to engaging in well-considered ‘duets’ and trilling in consort with the
instrumentalists. 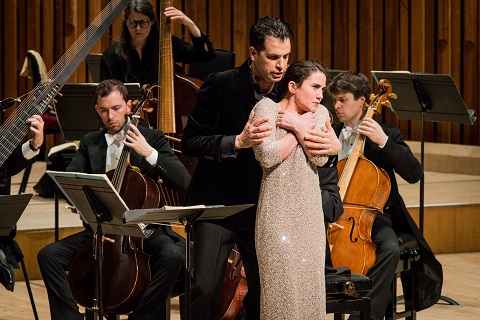 Davies’ fellow cast members were no less impressive, though. The first
phrase of Armida’s ‘Furie terribili’ flashed with fire as Jane Archibald
summoned an almost burning gloss at the top to convey the evil
enchantress’s fury, and she wasn’t afraid to introduce an occasional nasal
glint to suggest duplicity and cunning. Archibald was untroubled by the
extravagant coloratura of her second Act 1 aria, but in the following Act’s
grief-laden ‘Ah crudel, il pianto mio’ she found beautiful tonal richness
to convey an affecting sorrow which was complemented by plaintive oboe and
bassoon.

Recorder player Tabea Debus charmingly evoked pastoral purity in Almirena’s
‘Augelletti’, her rapid-fire whistling conjuring an angelic aviary to
dispel the image of Addison’s scorned sparrows. Here, JoÈlle Harvey’s
crystalline soprano matched Debus’ sparkling spotlessness, while the
freshness of Harvey’s opening aria, in which Almirena urges her beloved
warrior to victory, was tinted with just a glint of passion at times,
suggesting a flash of the silvery sword that Rinaldo will carry with him
into battle. In Act 3, both the unison between voice and violins and the
synchronisation of the fluid changes of metre in ‘Bel piacere’ were
flawless. But, before that, Harvey had held the Barbican Hall audience
spellbound in ‘Lascia ch’io pianga’: Handel could recognise when he had a
hit on his hands, borrowing this aria from his 1707 Roman oratorio, Il trionfo del Tempo e del Disinganno (which had itself made use
of material derived from the sarabande in Almira of 1705), but
even he would surely have delighted in the grace, beauty and dignity that
Harvey bestowed upon the deeply expressive simplicity of this aria, in
which Crouch and theorbo player William Carter added discerning and
delicate detail.

The plum-coloured hues and consoling warm of Sasha Cooke’s mezzo conveyed
all of Goffredo’s regal composure and goodness in the ruler’s first aria of
faith and contentment, while the effortless elegance and melodic fluency of
‘Sorge nel petto’ in Act 3 made Goffredo’s calm joy and deep familial love
palpable. As Goffredo’s brother, Eustazio, countertenor Jakub JÛzef
Orli?ski offered a slightly mellower, darker complement to Davies. The easy
flow and even colour of ‘Col valor, colla virt˘’ at the close of Act 1
impressed, while the lyricism and alertness to textual nuance of ‘Siam
prossimi al porto’ evoked both the confident faith and the tender love of
the three crusaders as they arrived at Armida’s sure to liberate Almirena
from the sorceress’s clutches. Owen Willetts effectively characterised
Armida’s supernatural opponent, the Christian conjuror Mago and
light-heartedly injected a little comedy into the rescue mission,
furnishing the Christian champions with an outsized magician’s wand which
would have done a pantomime fairy proud. 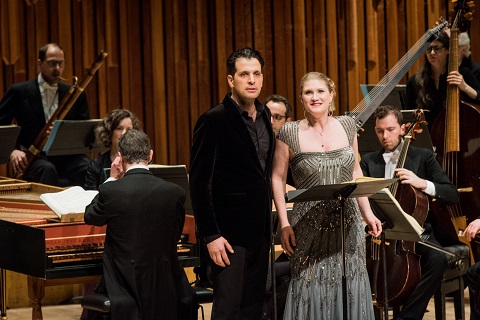 Supernatural egos and volte-faces provided opportunity for wry
humour and wit elsewhere, too, in Armida’s sparring duet with Rinaldo, and
when the spurned sorceress put emotional neediness before pride in
acceptance the apology of her errant mortal lover, Argante. As the leader
of the Islamic forces occupying Jerusalem, Luca Pisaroni made a tremendous
impression of bravado and self-righteousness in his entrance aria,
‘Sibillar gli angui d’Aletto’, squaring up vocally and physically to the
threat from his Christian challengers and pouring his bass-baritone
vigorously but smoothly through the long, running lines. Pisaroni acted
superbly, through both voice and demeanour: when appealing to Alminera’s
affections, his tone was tender; when responding to her rejection, his
voice drew renewed strength from indignation.

Bicket’s direction was not overly demonstrative but small gestures made
their mark and there was telling control of cadential hiatuses and
resolutions. Understandably, in the light of the terrific instrumental
playing we enjoyed, Bicket simply allowed his musicians to demonstrate
their excellence, none more so than harpsichordist Tom Foster whose
flamboyant rendition of the breath-taking virtuosic improvisatory
interludes within Armida’s vengeful war-mongering at the close of Act 2
received perhaps the loudest applause of the evening.

In rejecting what he saw as the childish absurdities of that first
production of Rinaldo, Addison did allow that an opera ‘may be
allowed to be extravagantly lavish in its decorations, as its only design
is to gratify the senses, and keep up an indolent attention in the
audience’. There was nothing ‘indolent’ about the attentiveness of the
hugely appreciative Barbican Hall audience on this occasion, however, and
only the skill, care and insight which Bicket, the English Consort and the
superb cast lavished on Handel’s music was required in order for our senses
to be satisfyingly and enchantingly gratified.