Violetta Valery is regarded as an Everest of operatic soprano roles and
Amanda Kingston proved more than up to the climb. Ms. Kingston has a
supple, agile, alluring instrument that is more than capable of meeting the
legendary challenges of the part, namely the flights of impetuous
coloratura in Act I; the midrange conversational passages that give way to spinto outbursts in Act II; the weighty pathos and then the limpid
lyricism of Acts III and IV. Vocally, the singer has all these effects in
her arsenal, and she has a lovely presence that is majestic and assured.
The San Jose public has been blessed to have an artist of her caliber on
their opera stage this season.

Violetta, like Carmen, is a complex persona, sometimes enigmatic, often
unpredictable, and endlessly malleable to the interpreter’s individual
gifts. Amanda’s two strongest assets are her rock solid, searing flights
above the staff that filled the auditorium with plangent, vibrant sound;
and her heart-breaking pathos with which she imbued the self-sacrificial
moments. She clearly understands and communicates the text, and there is
not a note out of place in here secure technique that is even from top to
bottom.

If there is one thing I wish this fine artist could invest in her already
accomplished portrayal it is a method of communicating the heroine’s
extreme physical frailty. Moments of temporary (and ultimately fatal)
physical lapses were a bit too robustly ‘present’; intelligently rendered
but missing that final tragically hollow color that can haunt the viewer’s
heart. I have no doubt that the prodigiously talented Amanda Kingston is
capable of this final dimension, which will further enhance what is already
one of the best sung Violetta’s on display anywhere. 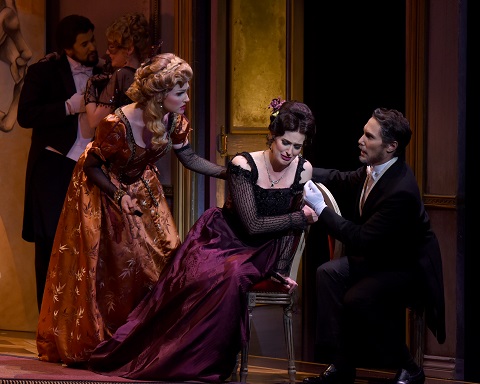 Dane Suarez is perhaps the most effortlessly boyish Alfredo I have yet
seen, and he communicates his helpless romantic (and sexual) infatuation
with Violetta with honesty and abandon. His fresh faced, puppy dog approach
made him stand out from the other jaded men in Violetta’s circle, and made
us understand why Violetta might be attracted to his impetuous sincerity
and handsome naivetÈ.

Mr. Suarez has an appealing, substantial tenor, which he deployed with
considerable nuance. Although he sang sturdily throughout the evening, he
found his most solid vocal footing in the sardonic phrases and
recriminating outbursts in Act III, where he poured out highly charged high
notes that were riveting in their intensity. When Dane affected the boyish
sweetness earlier on, the gears were sometimes on display as he worked
(albeit successfully) to reign in his sizable tone, and to color it
youthfully. In the future, he might pay attention to not letting his voice
get off the breath since some crooning phrase ends drooped just under the
pitch. Still, his total emotional investment in pursuing and later,
comforting Violetta proved heart rending.

Veteran baritone Trevor Neal was an imposing Giorgio Germont, his physical
stature and orotund baritone impressively illuminating the character. Verdi
gives Germont some of the opera’s best music and a wonderful theatrical
arc, and Mr. Neal took full advantage of the opportunity. His sonorous,
mellifluous delivery was marked by beautifully shaped phrases and incisive
theatrical insights. Although Trevor’s secure instrument is otherwise
totally hooked up, he uncharacteristically had a few passing encounters
with a bit of a rasp on topmost G-flats. Small matter, when this fine
interpreter dominated his every scene.

As usual, OSJ invested the smaller roles with its usual high standard of
meticulous casting. Mason Gates put his fine lyric tenor to good service as
Gastone. Baritone Philip Skinner was a memorable, firm-voiced Baron
Douphol. Christina Pezzarossi made a notable impression as Flora, with her
resonant, smoky mezzo providing ample pleasure. Erin O’Meally’s poised,
silvery soprano was well suited to Annina’s gentle phrases. Baritone
Babatunde Akinboboye was agile of voice and playful of demeanor as a
cavorting Marchese d’Obigny. In true luxury casting bass-baritone Colin
Ramsey, who has successfully assumed a number of major roles at OSJ, was a
firm-toned Doctor Grenvil.

In the pit, Dennis Doubin whipped up a sprightly, propulsive reading, after
the shimmering strings opened the performance with a luminous reading of
the prologue. Maestro Doubin led a secure, idiomatically correct rendition
that eschewed indulgence in the oom-pah segments of this middle-Verdi opus.
Conversely, he luxuriated in the expansive melodies that comprise much of
the work. The conductor elicited a cleanly detailed account of Verdi’s
masterpiece, even as he lived the drama in admirable collaboration with his
vocal soloists. Andrew Whitfield’s well prepared chorus proved a
considerable asset in the evening’s success.

Director Shawna Lucy has staged an efficient, cogent presentation that pushes all the
right buttons, managing the large populated scenes with skill and
imagination, highlighting select minor dramas played out between
choristers. She also creates meaningful interactions with her
principals, and underscores all the major emotional beats. Shawna gets excellent results from the chorus, and the re-imagined gypsy and toreador choruses in Act III were fresh and topical. The #metoo movement was even meaningfully evoked when, late in Act III, the chorus courtesans
suddenly reject male domination in solidarity with Violetta, and forcibly
extricate themselves from unwanted relationships. Ms. Lucy was assisted by choreographer Michelle Klaers
D’Alo

Eric Flatmo has designed a workable unit set that consists of a raked
platform stage left, with a sunken playing space stage right, all of which
gets repurposed each act, with telling different set pieces and looks. A
large picture window upstage reveals the Eiffel tower, with the exception
of Act II when a pastoral setting is projected. Beginning with a copper
toned look, this paneled environment’s shifting appearance proved a highly
effective playing space.

As this memorable season comes to an end, Opera San Jose has announced
their varied slate for 2018-2019 which includesThe Abduction from the Seraglio, Pagliacci, Moby Dick and Madama Butterfly.