The spiky shards and rusting scaffold of the attic of designer Soutra
Gilmour’s gothic summer-house point their confrontational fingers towards
the thick green tree-tops and ever-darkening sky above the ‘woodland
auditorium’. The house is a potent symbol of the neglect of which the
children’s guardian is guilty, and of the moral danger to which this
ethical irresponsibility exposes his two charges. Indeed, there’s physical
danger too, for the set is formed of twisting ladders, roof-top perches and
planked pathways which skirt and lead down to the tangled canes beside the
imagined lake – bringing to my mind the reed beds of Snape Maltings, though
beside the River Alde the whispering swoosh of the wind and the cool cry of
the curlew have none of the aura of decay and peril that the rustling
leaves and fleeting bird-song conjure here.

Director Timothy Sheader, the artistic director of Regent’s Park Theatre,
leaves us in no doubt of the presence of evil and menace – the dilapidated
piano and lop-sided chalk-board embedded in the undergrowth seem to
undermine the notion that the children are to receive any ethical or
educational instruction at Bly – but he might perhaps have been wise to
have paid more heed to Henry James’s own words, ‘Make [the reader] think
the evil, make him think it for himself, and you are released from weak
specifications’ (‘Preface’ to the Turn of the Screw).

For, it’s the withholding of knowledge and certainty, the prevalence of
secrets, the refusal to elucidate ‘meaning’ which makes James’s novella so
chillingly disconcerting. It’s true that Britten does ‘fill in’ some of
James’s gaps, particularly in determining that the ghosts should sing (and
surely they should, if they are to be a driving musico-dramatic force and
not simply Freudian intimations or projections of the Governess’s
psycho-neurosis). While James was concerned with ‘causing the situation to
reek with the air of Evil’ rather than with ‘having my apparitions correct’,
according to Lord Harewood, Britten was adamant that the haunting should be
‘real’ rather than a product of the Governess’s paranoia. But, it’s hard to
believe that the composer imagined that his ghosts would walk amongst the
seated audience, undeniably corporeal. 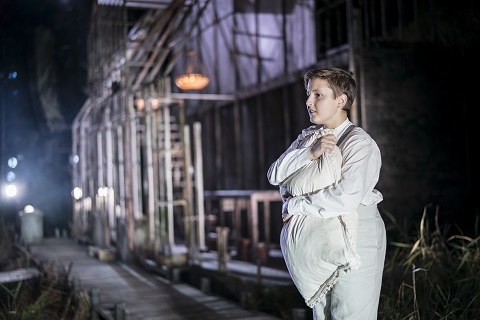 Sheader risks inciting the criticism which The Times made of the
1954 premiere in Venice: that the ghosts were ‘two too solid stage
villains’. This Quint is a solid physical presence whose rugged vulgarity
is emphasised by an ugly red wig and beard. Moreover, his first calls to
Miles, which emanate from the top-rear of the auditorium, are too firm and
present – a consequence of the amplification of this production which
frequently shatters the music’s inherent intimations and subtleties and
upsets the balance between singers and instrumentalists. I missed the
unearthly beauty of Quint’s vocal arabesques, as audience heads swivelled
and strained to see from whence the strong voice arose: the point is,
surely, that it springs unbidden but welcome from an unexplained
shadow world – its presence heralded by the ornamental gestures, pentatonic
sweeps and exotic colourings of the scene’s instrumental preface. It
doesn’t help that a scene titled ‘At Night’ takes place in sun-drenched
daylight (despite the shifting of the original start time to achieve a more
ambient coincidence of narrative and setting). I began to reflect on
Deborah Warner’s ROH production, twenty years ago now, when Ian Bostridge’s
creepy, even ghastly, Quint emerged from the dense, mist-ensconced
thickets, and it was hard to know what was real or imagined, inside or
outside.

Miss Jessel was similarly corporeal – and, heavily pregnant, presumably by
Quint (as is hinted in James’s tale when Mrs Grose tells the Governess that
despite their difference in rank and position, there was ‘everything’
between them, and that, after that ‘She couldn’t have stayed. Fancy it here
– for a Governess!’). Heavily made up, with gothic eye-shadows, draped in
heavy green and purple which seems stained with pond-weed, her hands
mud-streaked, this former governess looked as if she had been dredged up
from lake in which she might have drowned. 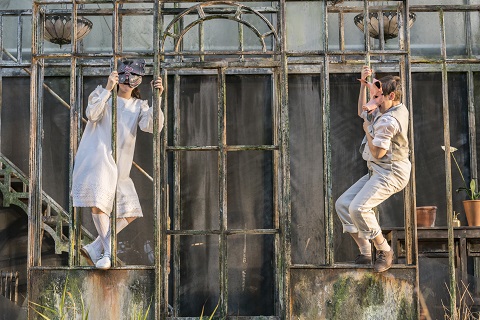 Some of Sheader’s ‘realism’ is effective, mostly that which pertains to the
characterisation and relationship of the two children, Miles and Flora.
Mischievous and boisterously fun-loving, they prepare for their new ward’s
arrival by exuberantly practising their bows of greeting – and emptying
flower-pots on their heads and drawing on the misty window panes. Gradually
their games become ‘darker’, as they taunt each other with worms, race
about and venture into the night with a confident abandon that might easily
escalate into the violence of Lord of the Flies.

Sheader establishes their strong identification with the two ghosts: Miles
puffs nonchalantly on a toy pipe; Flora plays with her long plait that
imitates Miss Jessel’s fairy-tale, knee-length rope of hair. Wiping away
the Latin conjugations which his Governess wishes him to practise, Miles
draws two smiling stick-men, one large, one small, a none too subtle
suggestion of allegiance.

When the letter arrives informing her that Miles has been dismissed from
his school – a ‘shocking’, ‘unclean’ place, James’s Governess infers – she
burns it; later, Miles carries out his own nocturnal immolation – what
‘shameful’ items does he incinerate? – and it is at this point that Quint
calls to him, prompting young Miles to whip off his clean white suit and
don a scruffy shirt, presumably once belonging to Quint. As Quint joins him
on the lake-side platform, Miles hugs his chest, leaps and swirls, and
grins with glee: certainly, freedom, discovery and fulfilment are what
Quint offers – “In me secrets and half-formed desires meet. […] I am the
hidden life that stirs when the candle is out.” – but Sheader seems to
state with no ambiguity that it is sexual initiation that Miles is
proffered and covets.

The earliest critics did not like this scene: Colin Mason, writing in The Guardian (15th Septembherer 1954), decried the
expansion of the ‘episode with Miles on the lawn at night’ into ‘a quartet
in which the relationship between the children and the ghosts is made
crudely explicit’. In fact, here, Elen Willmer’s Flora shows great
discipline in avoiding catching Miss Jessel’s eye as her former governess
lunges towards her, coming centimetres within touching distance (librettist
Myfanwy Piper’s stage directions indicate that Flora should ‘silently and
deliberately turns around to face the audience away from Miss Jessel’).
And, more successfully, in Act 2 Scene 6, ‘The Piano’, Quint arrogantly
places a music-score on the piano and then reclines against the instrument,
only raising himself to turn to a new page in the music, as Miles performs
his parodic recital – leaving us in no doubt whose tune Miles is singing,
whose song he imitates. 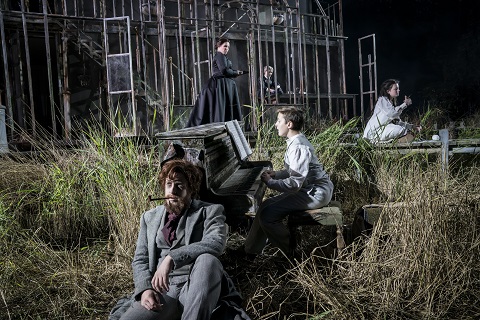 Just as the relationships between the children and ghosts seem
unequivocally real and intense, so the suggestiveness of the instrumental
parts is lost owing to the amplification of the musicians. Seated within
the ruined glass-house, there is an opportunity for the musicians to serve
as ghostly presences, intimated by elusive, often erotic, lyricism; but,
the over-amplification sends percussive thumps, the horn’s statement of the
‘screw theme’, and the delicate traceries of harp and celeste in ‘At
Night’, booming around the auditorium. And, as dusk finally falls, two
hanging lights within the glass-house illuminate the players with all too
clear definition.

There are two casts for the nine performances. It is common to assign a
single tenor to perform the Prologue and the role of Peter Quint – Peter
Pears took both roles at the first performance – which has the advantage of
further increasing the ambiguity of James’s tale. Here, William Morgan and
Elgan Ll?r Thomas sing both parts but take only one each in any one
performance, switching roles with the changing casts. On this occasion,
Morgan opened proceedings, delivering the Prologue in casual modern dress
from amid the audience stalls, and extending a relaxed invitation into the
narrative, though one that seemed too detached from the piano accompaniment
which articulates the motifs of the ensuing musical narrative.
Notwithstanding the aforementioned over-emphatic presence that results from
the amplification, Ll?r Thomas’s muscular, firmly defined tenor captured
Quint’s viciousness and angry resentment; he was similarly imposing
physically – no wonder Miles was idolatrous and intimidated in equal
measure. Elin Pritchard’s Miss Jessel was more other-worldly, and the
luxurious richness of her soprano hinted at forbidden, transgressive
passions; the scene in which she intrudes into the schoolroom and places
herself at the Governess’s desk was frighteningly threatening. 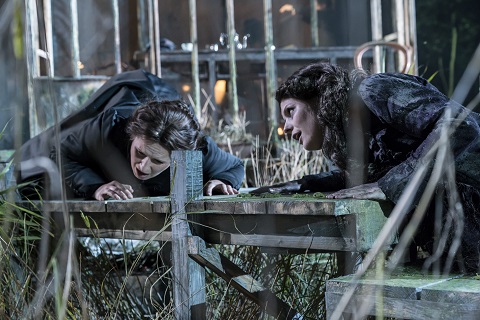 As the Governess, Anita Watson sang with a beautifully sweet tone and
finely, entrancingly nuanced phrasing; her words – there were no surtitles
though copies of the libretto were supplied – were as crystalline as her
conception of her own ‘mission’. But, while there was a strong sense of the
Governess’s growing fear, I did not feel that this deluded ‘innocent’ was
aware of her own culpability in the ensuing tragedy – this surely necessary
if her final line, “What have we done between us?”, is to make sense? She
should be firmly centred in a morally ambiguous middle-ground, but here
seemed rather too sympathetic, against the obvious malevolence of the
ghosts. And, Mrs Grose, sung with impressive musical composure and dramatic
credibility by Janis Kelly, seemed to share this sympathy with the
potential hysterical Governess, appearing never to challenge her even when
it is implied that it is the Governess who terrifies Flora, not Miss Jessel
at all, as the young girl begs Mrs Grose, “Cruel, horrible, hateful, nasty!
We don’t want you! Take me away, take me away from her!”

Daniel Alexander Sidhom and Elen Willmer were tremendous as Miles and
Flora; their expressive faces and utterly natural acting made the children
believably and worryingly unpredictable and ‘uncontrollable’, beneath the
veneer of polite conventions and mores, and their vocal lines were
confidently and persuasively delivered.

Britten: The Turn of the Screw