It is also an odd thing, perhaps, to start as well as to end with Gˆtterd‰mmerung, although that oddness may well be overstated.
Wagner’s initial intention was, after all, to write a single drama on the
death of Siegfried; after a certain point in the formulation of theRing project, much of what had been written as Siegfrieds Tod remained as Gˆtterd‰mmerung. Might one
even be able to recapture something of that initial intent, relying on the
narrations here as they might originally have been conceived? Perhaps – and
it is surely no more absurd intrinsically to watch – and to listen to – one
of the Ring dramas than it is to one part of the Oresteia
. On the other hand, a Gˆtterd‰mmerung conceived as a one-off –
whether in simple terms or as part of a series such as that presented some
time ago by Stuttgart, each by a different director, glorying in rather
than apologising for disjuncture and incoherence – will perhaps be a
different thing from this. Anyway, we have what we have, and I can only
speak of what I have seen and heard.

In that respect, I am afraid, this Gˆtterd‰mmerung proved sorely
disappointing – especially, although not only, as staging. Indeed, the
apparent vacuity of the staging combined with what seemed a distinctly
repertoire approach – yes, I know there will always be constraints upon
what a theatre can manage – combined to leave me resolutely unmoved
throughout. This did not seem in any sense to be some sort of
post-Brechtian strategy, a parallel to where parts at least of

started out – if not, necessarily, always to where they ended up. I
distinctly had the impression that what acting we saw had come from a
largely excellent cast. Is that at least an implicit criticism of the
revival direction? Not necessarily. I know nothing of how what few
rehearsals I suspect there were had been organised. I could not help but
think, though, that once again Wagner’s wholesale rejection – theoretical
and, crucially, practical too – of the ideology and practices of ‘normal’
theatres had once again been vindicated. This, after all, is the final day
of a B¸hnenfestspiel. At one point, he even wrote of
post-revolutionary performances in a temporary theatre on the banks of the
Rhine, after which it and the score would be burnt. Did he mean that? At
the time, he probably did, just as we mean all sorts of things at the time
we might not actually do in practice. Nevertheless, his rejection of
everyday practice points us to an important truth concerning his works. As
Pierre Boulez, whilst at work on the Ring at Bayreuth, put it:
‘Opera houses are often rather like cafÈs where, if you sit near enough to
the counter, you can hear waiters calling out their orders: “One Carmen! And one Walk¸re! And one Rigoletto!”’
What was needed, Boulez noted approvingly, ‘was an entirely new musical and
theatrical structure, and it was this that he [Wagner] gradually created’.
Bayreuth, quite rightly, remains the model; Bayreuth, quite wrongly,
remains ignored by the rest of the world. 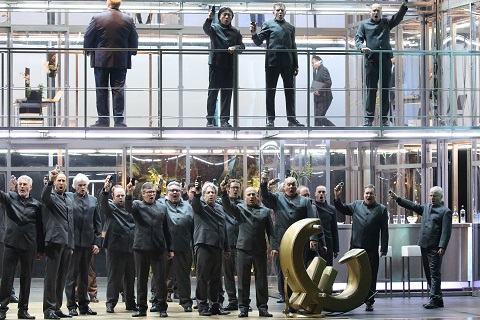 Such unhelpfulness out of the way, what did we have? Details of
Kriegenburg’s staging seem to borrow heavily – let us say, pay homage to –
from other productions. The multi-level, modern-office-look set is not
entirely unlike that for J¸rgen Flimm’s (justly forgotten) Bayreuth
staging. Br¸nnhilde arrives at the Gibichung Court with a paper bag over
her head, although it is sooner shed than in Richard Jones’s old Covent
Garden Ring. I shall not list them all, but they come across here,
without much in the way of conceptual apparatus, more as clichÈs than
anything else. Are they ironised, then? Not so far as I could tell. I liked
Siegfried’s making his way through a baffling – to him – crowd of
consumers, as he entered into the ‘real world’, images from advertising and
all. Alas, the idea did not really seem to lead anywhere.

A euro figure (Ä) is present; perhaps it has been before. First, somewhat
bafflingly, it is there as a rocking horse for Gutrune; again, perhaps
there is a backstory to that. Then, it seems to do service – not a bad
idea, this – as an unclosed ring-like arena for some of the action,
although it is not quite clear to me why it does at some times and not at
others. Presumably this is the euro as money rather than as emblematic
hate-figure for the ‘euroscepticism’ bedevilling Europe in general and my
benighted country in particular. (That said, I once had the misfortune to
be seated in front of Michael Gove and ‘advisor’, whose job appeared to be
to hold Gove’s jacket, at Bayreuth; so who knows?) There also seems to be a
sense of Gutrune as particular victim, an intriguing sense, although again
it is only intermittently maintained. Doubtless her behaviour earlier on,
drunk, hungover, posing for selfies with the vassals, might be ascribed to
her exploitation by the male society; here, however, it comes perilously
close to being repeated on stage rather than criticised. That she is left
on stage at the end, encircled by a group of actors who occasionally come
on to ‘represent’ things – the Rhine during Siegfried’s journey, for
instance – is clearly supposed to be significant. I could come up with
various suggestions why that might be so; I am not at all convinced,
however, that any of them would have anything to do with the somewhat
confused and confusing action here. 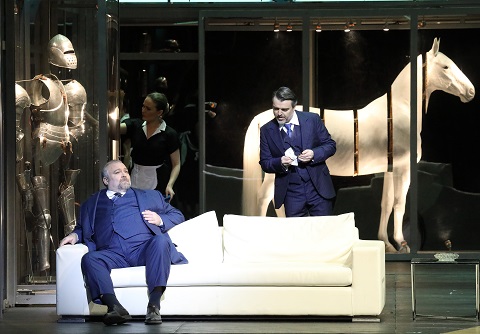 Kirill Petrenko led a far from negligible account of the score, which, a
few too many orchestral fluffs aside – it nearly always happens in Gˆtterd‰mmerung, for perfectly obvious reasons – proved alert to
the Wagnerian melos. It certainly marked an advance upon the often hesitant
work I heard from him in the Ring at Bayreuth. However,
ultimately, it often seemed – to me – observed rather than participatory,
especially during the Prologue and First Act. The emotional and
intellectual involvement I so admired in, for instance, his performances of


here in Munich was not so evident. Perhaps some at least of that
dissatisfaction, however, was a matter of the production failing to involve
one emotionally at all. The Munich audience certainly seemed more
appreciative than I, so perhaps I was just not in the right frame of mind.

Much the same might be said of the singing. Nina Stemme’s Br¸nnhilde
redeemed itself – as well, perhaps, as the world – in the third act,
recovering some of that sovereign command we know, admire, even love,
although even here I could not help but reflect how surer her performance
at the

had been. There is nothing wrong with using the prompter; that is what
(s)he is there for, as Strauss’s Capriccio M. Taupe might remind
us. Stemme’s – and not only Stemme’s – persistent resort thereto, however,
especially when words were still sometimes confused, was far from ideal
during the first and second acts. Stefan Vinke ploughed through the role of
Siegfried, often heroically, sometimes with a little too grit in the voice,
yet with nothing too much to worry about. It was not a subtle portrayal,
but then, what would a subtle Siegfried be? 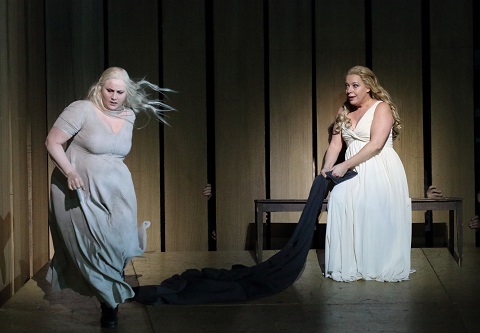 Some might have found Hans-Peter Kˆnig a little too kindly of voice as
Hagen; I rather liked the somewhat avuncular persona, with a hint of
concealment. Again, there was no doubting his ability to sing the role.
Markus Eiche and Anna Gabler were occasionally a little small of voice and,
in Eiche’s case, presence as his half-siblings, but there remained much to
admire: Gabler’s whole-hearted embrace of that reimagined role, for one
thing. Okka von der Damerau made for a wonderfully committed, concerned
Waltraute: as so often, the highlight of the first act. John Lundgren’s
darkly insidious Alberich left one wanting more, much more. The
Rhinemaidens and Norns were, without exception, excellent. I especially
loved the contrasting colours – Jennifer Johnson’s contralto-like mezzo in
particular – and blend from the latter in the opening scene. If
there are downsides to repertory systems, casting from depth as here can
prove a distinct advantage. Choral singing was of the highest standard too.

If only the production, insofar as I could tell, had had more to say and
more to bring these disparate elements together. Without the modern look,
it might often as well have been Robert Lepage or Otto Schenk.