In the Edenic opening, the Chorus of Old Trees sing, “Man is a form of
life/ That dreams in order to act/ And acts in order to dream”: in relating
the myth of the legendary pioneering lumberjack, Paul Bunyan, Auden depicts
an American utopia in which man strikes out to build a new world in which
personal freedom, individual choice and tolerance are paramount values. The
current social and political landscape, national and international, may
give little cause for such faith and optimism, but in 1939, the feeling
among Britten’s contemporaries that Europe was no place to live and that a
brighter future lay in the New World, led Benjamin Britten and Peter Pears
to set sail from Southampton on 29th April that year.

Britten wrote to his sister Barbara, on 3rd September 1939,
‘I’ve seen & am seeing Auden a lot, & our immediate future is
locked with his, it seems.’ Five years earlier he had recorded in his
diary, ‘Spend day with Coldstream and Auden … I always feel very young and
stupid with these brains – I most sit silent when they hold forth about
subjects in general. What brains!’ Later, in 1960, he told Lord Harewood in
a BBC interview: ‘I was very much influenced by Auden … He went to America,
I think it was ’38, early ’39, and I went soon after. I think it wouldn’t
be too much oversimplifying the situation to say that many of us young
people at that time felt that Europe was more or less finished.’ 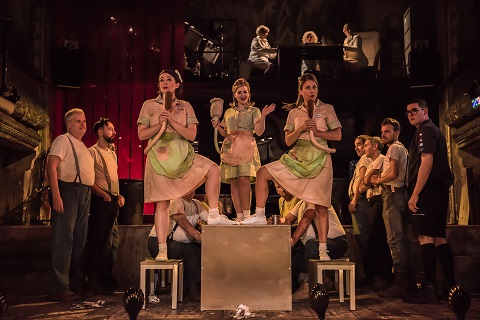 The Hollywood commission may not have materialised but there’s a
wonderfully indulgent and uplifting optimism about Paul Bunyan – despite the occasional heavy-handed ideological spin and
cynical mockery of American ‘can-do’ cheery confidence of W.H. Auden’s
lexicographically dextrous libretto: “Do you feel a left-out at parties,
when it comes to promotion are you pass over … then ask our nearest agent
to tell you about soups for success.” Auden wasn’t above overt pillorying
of what he saw as the facile values, neuroses and the vacuity of the Dream
either: “You owe it to yourself to learn about Beans, and how this
delicious food is the sure way to the body beautiful.”

First performed in May 1941 in Brander Matthews Hall, Columbia University,
by the Columbia Theatre Associates, Paul Bunyan is a work of
youthful hopes, independent choice and opportunity, and this ENO Studio
Live production, directed by Jamie Manton and performed by an excellent
young cast, fizzed with vitality, vivaciousness and positive vibes.

Auden’s text – condemned by contemporary reviewers such as Virgil Thompson
(in the New York Herald Tribune, 6 May 1941) as having ‘no
characters and no plot’ and for allegorical moralising that was ‘utterly
obscure and tenuous’ – tells the legend of the pioneering lumberman, Paul
Bunyan, who forged his way through the forests to found a New world. (One
small quibble: what was the point of providing surtitle screens but placing
them left and right, positioned above Wilton’s gallery, so that they were
entirely obscured from the capacity audience seated in the stalls?)

Wilton’s Music Hall might seem, at superficial glance, an odd place to
stage an agrarian idyll but this tastefully ramshackle building vibrates
with a raw energy and resilience, and a sense of risk. Manton and
choreographer Jasmine Ricketts pull the stopper out of the vitality bottle
and there was absolutely no danger of the vim and verve running out as the
cast and chorus whipped through Auden’s assemblage of episodes and
Britten’s stylistic melange with gleeful enthusiasm.

The dynamism was unflagging, through fights, feasts and even a mock
funeral. In fact, sometimes less might have been more – not least because
some of the singers seemed to forget that they were not at the Coliseum and
to underestimate the resonance of the Wilton’s acoustic – but the singing
and playing was consistently thrilling in its intensity, even if a bit
ear-splitting at times: a fortissimo “We’re bored!” from the
revolutionary Young Trees (“Reds”, sneer their aging forbears) left no
doubt about their impatience with their elder’s love of life in the slow
lane. 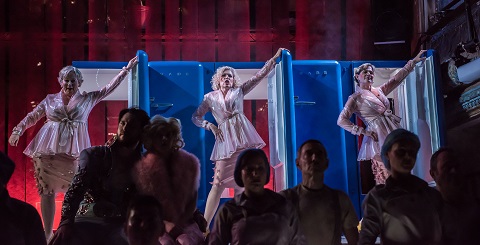 I questioned a few of Manton’s decisions, such as why he chose to replace
the balladeer narrator with a trio of female singers, thus excising an
important unifying element and diminishing the hilly-billy folksiness of
the guitar-accompanied ballads? Some of Auden’s character-names seem to
have been drawn from the advertising promotion booklet prepared by William
Laughead, an employee of the Red River Lumber Company, in 1914 which
introduced loggers named Johnny Inkslinger, Chris Crosshaul and Sourdough
Sam, as well as Bunyan’s best pal, Babe the blue ox. Here Babe was
represented by cobalt-blue refrigerators bearing his name, miniature in
dimension at first but subsequently a row of industrial-sized freezers from
which emerged ENO Harewood Artists William Morgan and Rowan Pierce to sing
the love duet of Hot Biscuit Slim and Bunyan’s daughter, Tiny, dressed as
Elvis Presley and Marilyn Monroe respectively. 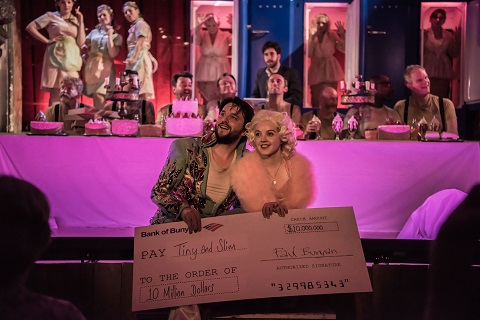 And, there was one moment of magic that was sadly missed: when the “whole
pattern of life is altered” and “Once in a while the moon turns blue”. In
his biography of Britten, Humphrey Carpenter observed that Britten once
remarked to Donald Mitchell, ‘That was Peter’, and a letter of 9 th January 1940 supports this idea, stating, ‘as long as I am
with you, you can stay away until the moon turns blue’. Britten’s
gamelan-inspired colours and textures convey mystery and exoticism: the
Dream involves not just a yearning for material success but also a serious
search for individualism and personal love. The hoisting of Bunyan’s
initials in neon-lit blue didn’t cast the same moonlight enchantment.

Paul Bunyan is literally larger-than-life: a Herculean logger who is
immense both physically and symbolically, capable of felling trees with a
flick of the wrist. In the opera he is represented by a disembodied voice
and here Simon Russell Beale’s recorded voice boomed with an authority both
benevolent and demanding – and unfortunately with a resonance that was
distorting and sometimes deafening. 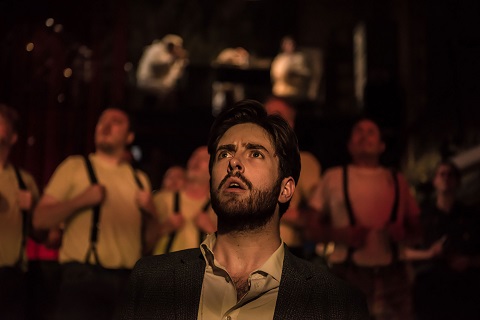 Elgan Ll?r Thomas was tremendous as the reflective Johnny Inkslinger,
capturing all the complexity of feeling in ‘Inkslinger’s Song’, the
deepening ruminations and self-examination being enhanced by the eerie
spell cast by the woodwind accompaniment. Ll?r Thomas managed to
communicate Auden’s articulation of the social conscience of 1930s – “Oh,
but where are those beautiful places/ Where what you begin you complete,/
Were the joy shines out of men’s faces,/ And all get sufficient to eat?” –
with persuasive personal sentiments.

But, the real star here, and rightly so, was the ENO Chorus. Paul Bunyan may comprise a motley crew of characters but many of
the solo voices step out from the chorus, and it is collective rather than
individual expression that is uppermost. The ENO Chorus really raised the
roof of Wilton’s, from the opening moments in which the Chorus of Old Trees
gave us a surround-sound homily to the final resounding choric plea “Save
animals and men”. Conductor Matthew Kofi Waldren stitched together the
eclectic idioms with fluency and brightly coloured zest, the orchestra
(Britten’s revised instrumentation was used) tiered on stage and spilling
into the side-aisles. 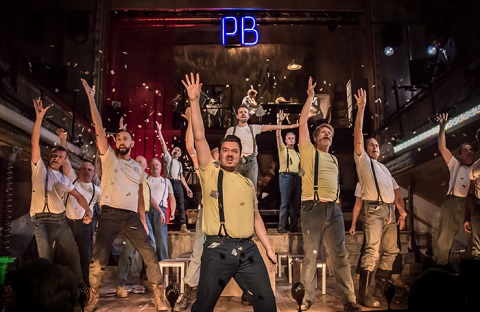 In an oft-quoted letter of 31st January 1942, Auden urged
Britten to embrace his political and sexual beliefs: ‘As you know I think
you the white hope of music … and I think I know something about the
dangers that beset you as a man and as an artist because they are my own’.
Britten was not best pleased to be warned about the artistically
destructive consequences of his attraction (and denial of such attraction)
to ‘thin-as-a-board juveniles’ and the advice that if he was to develop as
an artist he would have to stop ‘playing the talented little boy’ and ‘to
suffer, and to make others suffer’.

Despite Auden’s avowal that it was his ‘love and admiration’ that made him
so frank, estrangement followed, and Paul Bunyan languished,
unperformed until 1974 when Britten revisited the score, revising excerpts
for that year’s Aldeburgh Festival. The success of this performance
encouraged him to undertake further revisions and a new version of the full
operetta was broadcast by the BBC on 1st February 1976. Donald
Mitchell described how, when Britten received the news of Auden’s death in
September 1973, though the two men had not communicated for 30 years,
Britten was devastated: ‘It was the only time I’d ever seen Ben weep.’ And,
when he listened to the BBC radio broadcast, Mitchell remembered (as
related by Humphrey Carpenter) that ‘Ben was profoundly moved by
re-encountering this forgotten work from a forgotten – virtually suppressed
– past. He hadn’t remembered that it was such a ‘strong piece’ – his words;
and the impact of the music, combined with all the memories it aroused – of
Auden, of the American years, of his own youth, energy and vitality –
over-whelmed him.’

I’m not sure that this ENO production really captured the ‘innocent’
directness of Paul Bunyan.


seemed more poignant to me. But, Manton delivered a strong message. In the last scene Paul Bunyan’s Voice utters the warning: “Every
day America’s destroyed and re-created,/ America is what you do./ America
is I and you,/ America is what you choose to make it.” Now, there’s a
thought for troubled times, on both sides of the pond.