at the time of the publication of the tenor’s award-winning book,

, but one which at times must have felt so relevant to the singer’s own
experience of the work. Bostridge has been studying and performing
Schubert’s cycle of 24 settings of poems by Wilhelm M¸ller, which the
composer told his friends had ‘cost me more effort than any of my other
songs’, for more than 30 years. In more than 100 performances, he has been
partnered by many different pianists, sung the work in venues both intimate
and vast, made a film of the cycle (directed by David Alden, in 1994), and
taken it onto the stage in performances of Hans Zender’s ’composed
interpretation’ of Winterreise (1993), complemented by Netia
Jones’s video designs,

It is surely a work that Bostridge has ‘lived’, and certainly which he
re-lives, physically, psychologically, emotionally, with every fresh
performance. And, ‘fresh’ is an apt word, for while Bostridge’s vocal and
expressive ‘identity’ is distinctive and striking, his performances of Winterreise traverse a wide emotional spectrum which embraces
existential despair, self-lacerating irony, gentle wistfulness and wild
delusion with varying degrees of emphasis. I’ve lost count of how many
times I have heard Bostridge perform Winterreise. Certainly, I
remember, as a student, attending his first solo recital at Wigmore Hall in
February 1995, and I have enjoyed countless lieder recitals by the tenor in
the subsequent 23 years. Returning to the Hall last night to hear him sing Winterreise once again, partnered by Thomas AdËs, I reflected that
I too might stand accused of being afflicted by the mesmeric potency of
this music and voice.

This performance of Winterreise was a remarkable symbiosis of the
familiar and the revelatory. And, the subtle, pining beauties that AdËs
coaxed from the piano part played no small part in creating a journey which
ventured at times into deeply introspective terrain, but which was always
richly imaginative. I have heard AdËs perform Winterreise with
Bostridge several times, writing reviews of their performances at the

and, the previous year, at the

. Perhaps the expressive diversities and differences between those two
performances, just six months apart, should have prepared me for the
invention and spontaneity of this recital at Wigmore Hall. It was an
enactment of human desolation which was strange, terrifying and captivating
in equal measure, and which held me spellbound. 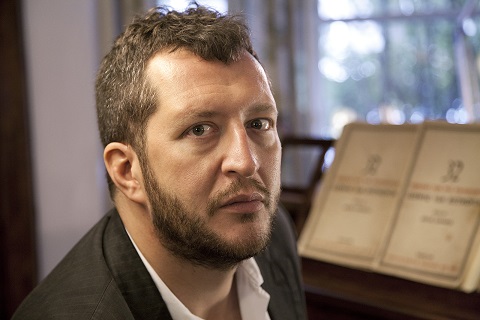 I don’t think I’ve attended a performance of Winterreise in which
I have been so aware of the pianist’s presence – participating in,
contributing to, depicting, inciting, reflecting on the wanderer’s
psycho-physical journey. I noted, of the duo’s Barbican Hall performance,
that ‘the generally restrained dynamics, particularly from AdËs, asked us
to listen with discernment to the gestural minutiae’, and in the intimacy
of Wigmore Hall AdËs dared to retreat still further, playing with an
astonishingly delicate touch, shaping every utterance with exquisite
suppleness.

The wanderer did not so much as step out with a purposeful tread in ‘Gute
Nachte’ as float, carried by dreams and memories through the bleak iciness
to which he seemed insensible. The piano’s accents were but tender
emphases, as if the traveller’s foot had sunk into soft snow, and AdËs’s
sweet pianissimo faded still further in the second stanza as
darkness enveloped the world. Bostridge was at one with this ethereal
landscape, his whispered ‘Gute Nacht’ a farewell not just to his beloved,
but also to recognisable realities. But, in ‘Die Wetterfahne’ the
traveller’s unpredictability immediately revealed itself in the flash of
fire with which Bostridge scorned the weather-vane, ‘Da dacht’ ich schon in
meinem Wahner,/ Sie pfiff’ den armen Fl¸chtling aus’ (In my folly I thought
it mocked the wretched fugitive). There was a terrible, unhinged quality to
the anger.

In song after song, AdËs surprised me with the emotive suggestiveness of
the slightest of gestures. The pinpoint delicacy of the frozen tears which
fall unnoticed in ‘Gefrorne Tr‰nen’ conjured a painful innocence when the
traveller realises that he has been weeping; and here, the darkness of
Bostridge’s confused low murmuring, ‘Ei Tr‰nen, meine Tr‰nen’, was
shocking, all the more so in the light of the deceptive lyricism of the
final stanza. This warmth, though, was immediately numbed by the rapid
curtailment of the piano’s brief swellings in the introduction to
‘Erstarrung’, and Bostridge’s oscillation between heated avowals and
insubstantial musings. The fourth stanza of this song perfectly exemplified
AdËs’s engagement with the poet-narrator’s journey, the quiet, even
circling of the right-hand being underpinned by a sharply defined bass line
in which a triplet figure came to the fore, as if literally pushing the
wanderer onwards.

But, despite the compelling impetus a pause did come, in a strange vision
of the linden-tree which seemed to carry Bostridge away from the present,
his voice becoming blanched and eerie as the dangerous rustling branches
beseeched, ‘Komm her zu mir, Geselle, Hier findst du Ruh’!’ (Come to me, my
friend, here you shall find rest!). The arrival of the cold wind woke us
all from such mysteries, and as Bostridge declared, ‘Ich wendete mich
nicht’ (I did not look back), the piano seemed almost to disappear. From my
seat in the Hall, I could appreciate how closely AdËs watched, followed,
responded to Bostridge in ‘Wasserflut’ (Flood), in which the tenor
emphasised the traveller’s instability and volatility, through startling
tonal contrasts. And, again, there was that telling detail from AdËs: in
the third stanza he seemed to emphasise the difference between the piano’s
dotted rhythm and the singer’s triplets (a discrepancy which has been
subject to much, unresolved critical debate), lagging behind the vocal line
and sharpening the poignancy of the traveller’s address to the snow, ‘Folge
nach nur meinen Tr‰nen,/ Nimmt dich bald das B‰chlein auf’ (You’ve only to
follow my tears and the stream will bear you away).

The languor of some songs created a heavy, wretched woefulness, as when the
wanderer confronts the motionless, ice-crusted stream in ‘Auf dem Flusse’
(On the river), and here the indignation of Bostridge’s rhetorical outburst
– as the poet-narrator imagines that beneath the stillness a torrent rages,
like that in his own heart – was complemented by the tautness of the piano
bass trills, the left hand being somehow both melodious and discomforting.
The piano emerged slyly from the shadows at the start of ‘Irrlicht’
(Will-o’-the-wisp), and though the poet-speaker declares himself calm, as
he makes his way down the dry bed of the mountain stream, there was fear in
the rising vocal portamenti of the last stanza and in the piano’s
final whispered taunt.

In contrast, I scribbled the word ‘deranged’ in my programme alongside the
text of ‘R¸ckblick’ (A backward glance), and I think that says it all: this
traveller seemed to have become detached from the real, and the corporeal,
existing ‘somewhere else’ in a world of his own tortured imaginings. In
‘Rast’ (Rest) the juxtaposition of Bostridge’s light head-voice, as he
drove on without rest through the storm, and the dense piano left-hand
chords deepened this sense of ‘lostness’ still further, and the final pang
of anguish which afflicts the traveller’s heart was viciously tense. By
‘Fr¸lingstraum’ (Dream of Spring), both pianist and singer had submitted to
an almost psychotic unsoundness, deviating alarmingly between frenzy,
desolation and dreaminess. The slowing at the end of this song, which
emphasised the clarity of the low piano bass line, seemed to prepare for
the weary weight and torpor of ‘Einsamkeit’ (Loneliness); here, single
words, ‘Einsam’, ‘Leben’, seemed almost detached from any semantic context,
and Bostridge’s voice was bleached of all colour in the wanderer’s
concluding reflection on a past when he was not so wretched.

The arrival of the mail-coach brought no promise or joy, AdËs’s poundings
ringing with indifference: ‘Die Post bringt keinen Brief f¸r dich’ (There
will be no letter for you). There was a further pained paring of emotional
connectedness in the unisons of ‘Der greise Kopf’ (The hoary head), in the
cold simplicity of the piano’s arpeggio-triplets in the prelude to ‘Die
Krahe’ (The crow) – as even as a child’s music-box – and in Bostridge’s
fragmented address to the ‘wunderliches Tier’, strange creature, whose
overhead circling casts a perturbing shade. At the close of the song,
Bostridge turned his back on the audience, gazing into the belly of the
piano, lost in terrifying absurdity and unease.

It didn’t seem possible that we could descend any further into existential
desolation, but we did, and by the time we had travelled from impetuous
last hopes (‘Letzte Hoffnung’), through the taunting barking of dogs and
rattling of chains in the village (‘Im Dorfe’) and into pure delusion
(‘T‰uschung’) what was most chilling was the way the supreme control
executed by singer and pianist served a seemingly irredeemable
irrationality. The proverbial hopelessness of trying to argue with a madman
was palpable.

And so it seemed oddly but wonderfully ‘wrong’ that we could admire
AdËs’s lovely voice-leading in ‘Der Wegweiser’, especially as the
sign-post led us only to the essence of human isolation: the slowing,
fading declaration of acceptance that the wanderer must travel the one road
from which no man has ever returned (‘Eine Strasse muss ich gehen,/ Die
noch Keiner ging zur¸ck’). And, that Bostridge, in ‘Das Wirtshaus’ (The
inn), could colour so tenderly the traveller’s acknowledgement that the
graveyard is to be his place of rest. AdËs did not conjure defiance at the
start of ‘Mut!’ (Courage!) so much as half-hearted self-encouragement,
though there was fierce anger in the final two chords, which almost whipped
us with their bitter accents.

I don’t think I’ve ever heard Bostridge sing ‘Die Nebensonnen’ more
beautifully, the eloquent decorations of AdËs’s introductory phrase
inspiring a lyrical gentility which made nihilist submission to darkness
and death seem almost consoling. But, should we have been tempted by
apparent intimations of solace, AdËs revealed our foolishness at the start
of ‘Der Leiermann’: the left hand’s upward acciaccatura, which
resolves to form the bare fifth of the hurdy-gurdy man’s dirge, here
crunched onto the beat, an aggressive and disturbing intrusion – and this
was, for once, no pianissimo, but a forceful, sustained
expression of contempt and pain. The clanging dissonance of these first two
bars, though not stated again, lingered and cast an acerbic shadow over the
song, draining the traveller of a life-pulse, even as he marvelled at the
organ-grinder’s steadfastness – ‘Dreht, und seine Leier/Steht ihm nimmer
still.’ (He turns the handle, his hurdy-gurdy’s never still). The silence –
both relief and horror – which engulfed the traveller was absolute.