It’s not surprising that a twenty-first-century opera director might want
to find ways of re-imagining Salome which do not simply reproduce fin-de-siËcle obsessions and neuroses. Adena Jacobs’s new
production for English National Opera eschews the quivering sensuousness of
Flaubert, Huysmans, Moreau, Beardsley, Wilde, Klimt et al –
overlooking, in so doing, Richard Strauss’s own chromatic writhing and
lurid orchestrations – and replaces their visual and literary lavishness
with defiant feminist imagery. Barbies and Bronies both take a bashing, as
this insolent teenager in black leather hot pants gives as good a gaze as
she gets, wielding a phallic baton in brutal defiance and steely
self-definition. 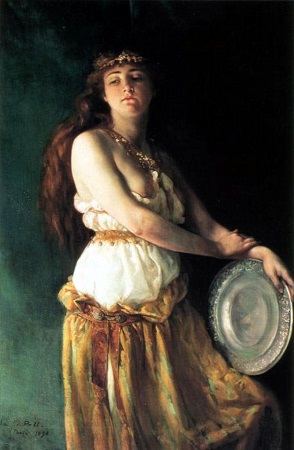 Jacobs isn’t the first to attempt, as Lawrence Kramer puts it, ‘to
appropriate the Salome complex on Salome’s behalf’.

Kramer draws attention to a portrait of Salome which the American artist
Ella Ferris Pell exhibited in 1890 and which Bram Dijkstra reproduces on
the cover of his book Idols of Perversity, citing Dijkstra’s
suggestion that, ‘Pell’s Salome makes a revolutionary statement by being
nothing but the realistic portrait of a young, strong, radiantly
self-possessed woman who looks upon the world around her with confidence …
[Such a woman] was far more threatening, far more a visual declaration of
defiance against the canons of male dominance than any of the celebrated
vampires and viragoes created by turn-of-the-century intellectuals could
ever have been.’

Dijkstra’s words largely seem to sum up the intentions of Jacobs and
designer Marg Horwell in their feminist commandeering of Strauss’s opera,
though of course the twenty-first-century context supplies its own
particular imagery. We begin in near-darkness, Stuart Jackson’s Narraboth
yearningly proclaiming his obsessive love for the beautiful princess of
Judaea, surrounded by a crowd of fellow-fans and Instagram-followers who,
confined within a roped-off enclave, await the arrival of their idol. Above
is suspended what at first seems to be a fish-tank, though grainy glimpses
of the sinuous movements of a woman bathing gradually come into semi-focus.

At last, Salome herself becomes visible through the blackness. She watches
herself being watched. Given what will follow, perhaps she should have
learned a lesson from the long list of troubled, contemporary ‘celebrities’
who have found, with sometimes tragic consequences, that though playing
with one’s public personae gives illusions of control, it’s not so easy to
exorcise patriarchy and find one’s authentic self. 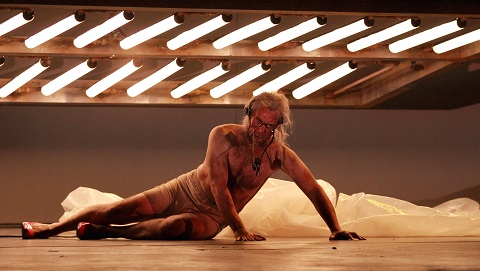 Indeed, out of the blackness, via a reverberant loud-speaker, come the
stirring warnings of David Soar’s resonant and arresting Jokanaan. Allison
Cook’s Salome is drawn like a fly to an electric zapper and descends to the
Baptist’s den of incarceration. Only the feet of the filthy prisoner are
visible, protruding from a grubby tarpaulin – presumably preventing the
prophet from being fried alive by the fierce lights burning above him. His
feet are crushed into shocking pink stilettos and his mouth, so feared by
Herod, so fetishized by Salome, is magnified on the rear wall. When he
staggers from beneath his protective sheet we see that a pin-hole camera is
strapped to Jokanaan’s face – a sort of scold’s bridle – relaying
projections of the potent orifice.

The portentous confrontation between redeemer and radical unfolds: as
Salome luxuriates in her desires, Narraboth circles with a video camera –
presumably for up-loading to YouTube – before killing himself. Slipping her
feet into Jokanaan’s stilettos, Salome indulges in some necrophiliac
writhing on the Syrian guard. She had unwound her clothing, to bare her
flesh; now, Jokanaan unties the bandage on his wrist in order to shield his
eyes from such debauchery. 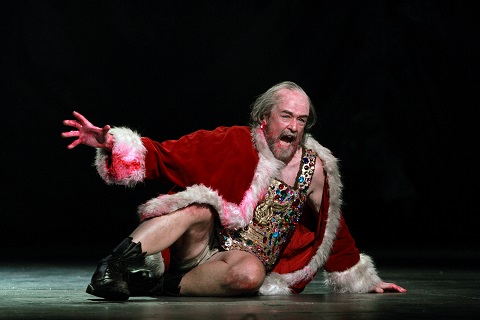 Leaving the prison to return to Herod’s ‘pleasure’ palace, we find the
monarch frolicking with four nymphs in shiny nude leotards. Dressed in a
be-jewelled wrestler’s suit, grubby boxer shorts and Santa coat, Michael
Colvin is a ‘Mad King’ indeed. Desperate, debauched and deluded, he makes
George III look a picture of mental and physical health. His ‘courtiers’
sit on the side-lines, aptly dressed in blue surgical gowns and gloves –
they are going to have to do the clearing up, after all. Herod slithers in
Narraboth’s blood; a rosy My Little Pony is decapitated, disembowelled and
hoisted aloft, its mane hanging limply as its floral entrails spill across
the stage. In the face of such dysfunctionality, the eloquent pleas of the
Nazarenes (Robert Winslade Anderson and Adam Sullivan) are as impotent as
the knock-kneed Herod. Herodias (Susan Bickley) wraps herself in a
net-curtain which has been pulled down to reveal a blindfolded Saint
Sebastian-cum-David Bowie. 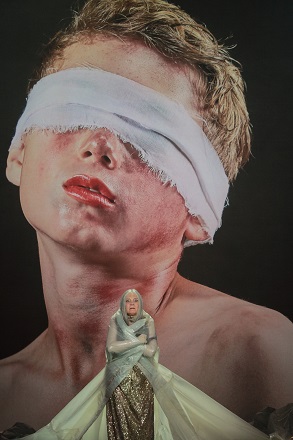 I confess that, by this point, I was suffering from an overload of the
absurd. I hoped that some sense of ‘purpose’ or context would arise from
the Dance of the Seven Veil’s and Salome’s final monologue: the still
points at which Salome is the focus of our own voyeurism. Allison Cook is a
terrific singing-actor and she has all the notes in her arsenal, if not
quite the gloss that might outshine the instrumental excess.

But, her Salome doesn’t so much as dance as pose languidly and grasp a baseball bat,
appropriating phallic authority. Having discarded her Barbie-doll
candy-pink sweatshirt and whipped off her blond wig to reveal a
power-haircut, she slides up the pony’s belly and revels in its ripe
intestines. Four dancers – Essex-scrapes, black football shorts, sequinned
head-dresses – jerk and twerk. 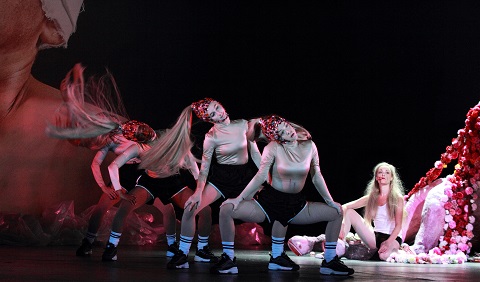 Jacobs believes that the dance is not a ‘true unveiling or an expression of
the soul. It is a dance constructed for Herod’s gaze … On this night,
Salome subverts the dance for her own gain, she uses it to radicalise
herself’. It is not mystical, she declares, but ‘an escalation of her
power, a ritualistic dance for the head of Jokanaan, an act of ritual
preparation.’ Well, the notion that women can subvert the patriarchal,
scopophiliac gaze is nothing new; even Flaubert suggested that Salome
usurped power, that her movements evaded male determination: ‘With her eyes
half-closed she twisted her body backwards and forwards, making her belly
rise and her breasts quiver, while her face remained expressionless and her
feet never stopped moving … From her arms, her feet, and her clothes there
shot out invisible fire.’ But, what if there is no ‘movement’: can
her dance still empower? Though conductor Martyn Brabbins drew radiant silk
and riotous sleaze from the ENO Orchestra, I was unable to make sense of
the schism that opened between visual image and musical motion.

Having turned all male heads, Salome then topples them. And, it is the
severed head – in Wilde’s play, this is a magisterial and monstrous Medusa
– that ultimately draws our gaze. But, Jacobs doesn’t give us a head, only a lumpen white plastic bag. This makes a nonsense of
the text and psychology of the monologue – ‘If you had looked at me, you
would have loved me’, she sings to the severed gore, desperate to command
Jokanaan’s gaze. 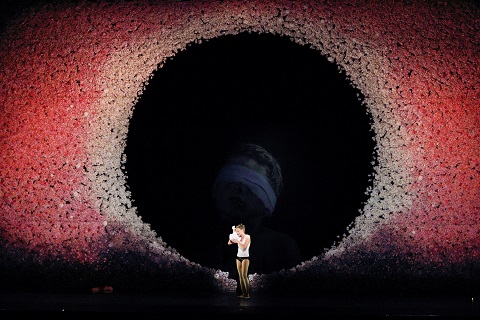 One thinks again of Pell’s portrait of Salome with its empty platter. Is
this Jacobs’s design: if there is no head then our gaze remains fixed on
Salome herself and thus the patriarchy does not re-exert its power? The
director’s final image is equivocal: a flower-bordered black-hole, framing
the bandage-eyed Bowie look-a-like; is this a mouth, a vulva, or what Elena
Manafi (Senior Tutor/Programme Director PsychD In Psychotherapeutic and
Counselling Psychology at the University of Surrey) describes in her
programme article as ‘the abyss of the feminine’? Jacobs, it would appear,
wants to turn Salome’s pathological narcissism into a ‘victory’, but her
Salome is figuratively blinded by solipsism: and, spoiler alert, literally
blinded by her mother’s hands which shroud her eyes from the truth that the
lips she kisses are not Jokanaan’s – he’s still in the plastic bag – but
Herodias’s own? Aren’t there enough Freudian threads in this tale already … 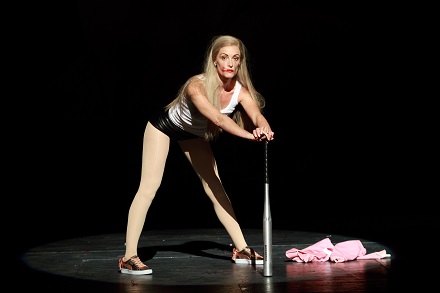 This Salome ends as the protagonist places a phallic gun in her
mouth. Manafi argues that ‘Destruction becomes a form of liberation’, and
that although Salome’s attempts to master and manipulate the male gaze
have been ‘nothing but mimicry’ of patriarchal dynamics, her final act is
an ‘outburst of violence that constitutes her emancipation’. But, Jacobs
and Manafi seem to have forgotten that there is a theatrical
audience: she becomes a prey to our gaze. As scholar Peter Conrad
has observed, ‘Salome ceases to be a character and becomes an image, and
opera turns simultaneously into a symphonic poem, into a ballet, and into a
painting’.

Jacobs allows for equivocation. But Angela Carter did just this nearly
forty years ago, in the stories of The Bloody Chamber where the
fantastical allows women to embrace their inner ‘darkness’: some critics
argue that the female ‘victims’ of Carter’s fairy-tales become gradually
empowered by embracing desire and passion as a human animal, others that
Carter envisages women’s sensuality simply as a response to male arousal
and that her tales can only reproduce patriarchal values rather than modify
or shatter them.

Jacobs gives us arresting and intriguing visual images, but her Salome is smorgasbord of ideas and theories. Narraboth’s blood and
the pony’s entrails are too slippery to tie the tableaux together.