Re-engaging with Mahler in concert – with his longest and most unique
symphony, and, at the time it was written, also most Modernist – brought
both dividends and problems. This was a performance that was sometimes
remarkable for its precision and beauty; but it was also one that barely
survived by the skin of its teeth in parts of it. The Boston Symphony
Orchestra, at their best, delved deep into the soul of this music; but
there was also some very shaky ensemble, perhaps a little uncharacteristic
for this orchestra. In the orchestral battlefields of the meadow and
forest, it was very much the flowers which triumphed over the animals in
this particular performance. I can’t recall ever having been so engaged by
a second movement that just resonated with the perfume of sound; the palate
of instruments from the orchestra blossoming like flowers in Spring could
almost be touched it was so gorgeously phrased. But come the third
movement, what had been a revelation before descended into chaos and
incoherence.

Mahler’s Third is, of course, on a colossal scale though its debt to
Nietzsche – most obvious in the fourth movement’s mezzo solo from Also sprach Zarathustra – is really a repudiation of much of what
the philosopher stood for. Despite its juggernaut proportions, the symphony
embraces its own kind of heavenly spirituality – it’s a vast metaphor for
Pan, God, nature and innocence, the children’s chorus of the fifth movement
being a defining parting of the ways with Nietzsche who preferred the earth
over the heavens. The diversity of the musical forms in this symphony is
extraordinary, too: there are marches which are militaristic and funereal,
peasant music, liturgical music, the voices of children and music that
unravels like a spiritual poem. No single performance can ever hope to be
everything in this symphony and Andris Nelsons and the Bostonians fell
short a little too often. 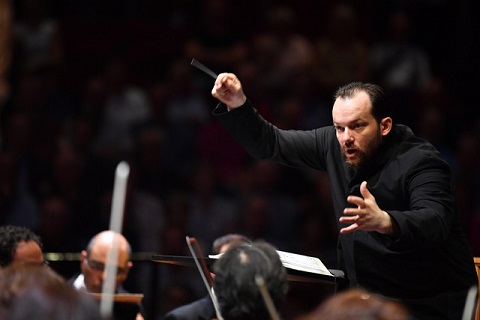 Given that there are almost 900 bars of music to the first movement alone
the scope for problems is huge. That there were very few in this
performance, and that it was conducted and played so well, suggested that
Nelsons had worked hard to understand where its shortcomings might be. The
opening march was a true awakening of Pan, with the Boston horns and brass
noble enough; there is always a slight risk with some American orchestras
that the brass will over-power almost everything in their path but here
Nelsons has tamed the instincts of his musicians and they play with a more
nuanced sound. But when Mahler asks for it – in the E flat March of the
Development section, for example – you got playing that was distinguished
by the sound of tubas and trombones playing with heft and coarseness. A
solo piccolo sung like a shrill lark, and yet it marvellously hovered over
the rest of orchestra as if taking flight. A bassoon rumbled from the
bottom of the orchestra. Winds and double-basses playing in unison were
notable for the shadows of sound that they cast. These are not necessarily
small details, but they were ones that Nelsons spot-lit with uncanny
accuracy. A highpoint – and they were really a highpoint throughout the
entire symphony – were the incisive timpani. Here we had strokes that
swelled against their skins like a coming storm, and timpani rolls that
seemed to emerge from the mistiness of the orchestra only to engulf you in
a torrential blaze of thunder.

The short second movement was, for me, the highlight of the performance.
The playing was not only impeccable, it was that rare thing in a Mahler
symphony – spellbinding. The sound of the orchestra was often like a
seasonal breeze – solo instruments, especially the winds, were diaphanous,
notes floated with such colour it was mesmerising. Oboes, flutes and
clarinets didn’t just have the sense they were blossoming; the instruments
seemed to bend like stems against the staves on the pages of the score.
When the storm arrived those same winds that had swayed through the
orchestra were now tossed about to the point of destruction.

Quite what happened to the performance after this point is anyone’s guess
because it rarely managed to reach the heights it had done during the first
two movements. The third movement was really quite the battleground – and
the Boston Symphony Orchestra didn’t come through it completely unscathed.
This isn’t music that can be moulded like clay (as Nelsons tends to do in
Mahler), and nor is it music that is strictly as Mahler described it in his
score. The third movement inhabits a world of extremes: It can be
mysterious, poetic, merry, anarchic, but rarely is it ever in the same
tempo, and rhythms are more complex here than anywhere else in the work.
Those same instruments that were so magical and fragrant as flowers,
struggled to emulate bird calls, and the orchestra became a forest where
its animals were without terror and, frankly, rather tuneless. If earlier
in the performance Toby Oft’s trombone solo had been redolent with
beautifully caressed intonation, here the two post horn solos of Thomas
Rolfs created the barometer for the rest of the orchestra to quiver at its
very roots. Granted, Mahler’s demands are enormous: The second post horn
solo alone demands a stretch in dynamics ranging from ppp to fff and then down to ppppp but the unevenness of delivery
generated uncertainty elsewhere. 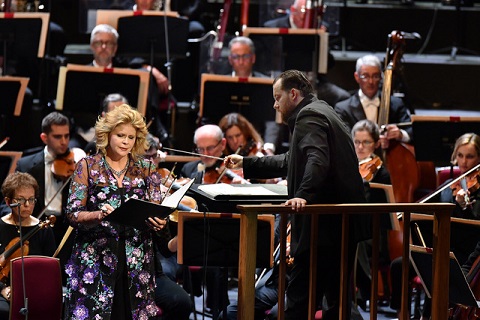 The fourth movement introduces us to Nietzsche’s ‘Mitternacht’ from Also sprach Zarathustra. Here, the focus of the symphony’s mood
changes – and Mahler requires a mezzo voice to do it justice. Nowhere is
the music of the symphony darker in temperament than here, and that has
much to do with the exceptional detail Mahler brings to the orchestration.
If the music rarely rises above piano, the fabric of the music is
largely laid out against fifths played on cellos and double-basses. The
nine basses of the Boston Symphony have tonal warmth, as well as a sonorous
bottom line, and there was much to admire in their playing here. But in
many respects, it’s the voice that matters in this section of the symphony
and Susan Graham brought a characteristic beauty to what she sang.
Nietzsche repeats derivations of the word ‘tief’ – or dark – throughout the
text of his setting and it was to Graham’s credit that these were isolated
by differences in tonal colour. If there is a somewhat Wagnerian strength
to some of her phrasing, the voice sustains a pianissimo with
precision and breadth. But this is also a text that drips with meaning and
imagery of eternal pain, and Graham was deft at making us aware that this
is the language of poetry that mirrors the music Mahler wrote to accompany
it. Nelsons was careful here to let his orchestra follow his singer –
rather than the other way around, as can so often happen at this point of
the symphony. A bassoon was almost a shadow of Graham’s dark voice
disappearing into the vacuum of the Albert Hall.

If there had been a careful matching of the voice against the precise
ideals of Mahler’s orchestration in the fourth movement, the fifth choral
section of the symphony sharply deviated from it. Quite what the motivation
was to replace a boys’ choir with one for girls puzzled me, but the
tendency of conductors to fiddle with the voices in Mahler’s symphonies for
dramatic effect – whether it be the Fourth or Das Lied von der Erde – is hardly new. Either way, the effect here
was to remove the distinctive timbre of the two main choruses one usually
hears and absorb them into a universal sound. If you felt that the sound of
bells did indeed come from somewhere high up in the hall, the children’s
voices didn’t, and this was even more so when the two choirs were singing a cappella where there was just insufficient contrast. Without any
orchestral accompaniment to hide the sheer urbaneness of the voices, the
sense of innocence was all but lost on me. Indeed, it almost made me think
that Nietzsche had won after all and Mahler’s idea that this music ascends
to heaven had been forgotten.

Any performance of the last movement of Mahler’s Third in the concert hall
will, I think, always be hampered by the last concert I heard of this
symphony fifteen years ago. That remains one of the most spiritual
twenty-five minutes I’ve ever encountered in a concert hall, a moment of
true communion between a conductor and his audience. To his credit, Andris
Nelsons generated moments that were sublime – some of the accents were
written in very dark ink, especially from the solid lower strings of the
orchestra, and there was an intensity to some of the phrasing that was
indelibly closer to lamentation than had been achieved anywhere else in the
performance. The Boston violins soared, and their pain wasn’t at all
tempered by anaesthetic. The brass chorales – trumpets ringing out hymns in
mighty unison, to be joined by horns – were distinguished and resounding.
When the coda finally arrived, it was driven with a ferocity from the
timpani that defied Nietzsche and forced open the gates of heaven.

There is unquestionably some music Andris Nelsons conducts well and his
Mahler certainly edges towards being distinctive. He’s a beautiful
conductor to watch, too; the elegance of his gestures, sometimes using just
his hands to shape the music instead of a stick, achieve much. He is never
over-wrought in this music, and clearly gets what he wants from his
orchestra. This was a performance that didn’t touch greatness, but neither
was it one that fell at every hurdle either. And only time will tell
whether this reviewer will ever brave Mahler again in the concert hall.