Not intrinsically, anyway. These things can happen anywhere, at any time;
these emotions, these physical and metaphysical truths are for
many of us as close to universal as makes no matter. Nevertheless, the idea
of a southern port city as a venue for touristic licence may well prove an
apt setting for what is at dramatic stake. It helped Mozart and Da Ponte
tread the fine line between realism and artifice that is surely fundamental
to this, (one of) the very greatest of all operas; it also did to
outstanding effect in

In a different way, or at least in a different southern port setting, so
too does it in the Guildhall’s new staging. I only realised after the event
– indeed upon starting to write this paragraph – that the director had been
one and the same: Oliver Platt, albeit with a different design team.
Perhaps, then, there was something after all to my hitherto innocent thesis
of a common theme, notwithstanding the move forward a couple of centuries
to the 19-80s to Alfonso’s Bar. Close to an American (West Coast?
San Diego?) naval base, with all the potential for conflict between
transience and long-term ‘home life’ that might imply, mood was
superficially very different, likewise the consequences for particular
directorial choices. Rarely, if ever, for instance, have I seen quite so
raucous an opening scene, as the licentious ways of the naval boys (and at
least one girl), their partners, and their would-be partners got under way,
our quartet of lovers to be schooled taken from their number. That sense of
a social context, however – a meaningful social context rather than a mere
setting, ‘pretty’ or otherwise – remained common to both productions. 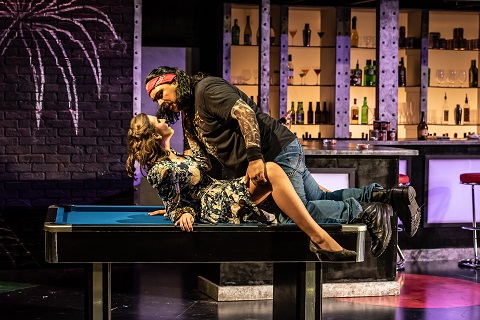 So too, again in different ways according to the different requirements of
this particular production and performance, were the spatial, eminently
musical visualisations of Mozart’s extraordinary and extraordinarily
telling musical symmetries and oppositions. CosÏ fan tutte is a
labyrinth and a laboratory like no other, as worthy a successor to the
experimental Bach of the cantatas as a precursor – a successor too – to Tristan und Isolde. Indeed, though Don Giovanni was the
Mozart opera Pierre Boulez said he had long wished to conduct, yet never
did; it is surely CosÏ he should ultimately have come to, not
least in light of his revelatory late recording of the Gran Partita, KV 361/370a. Whatever the ‘incidental’
detail of tequila shots, of entertainment in sombreros, of Despina the
notary as Judge Judy, the fundamentals – related, not necessarily identical
– were present both in Holland Park and at the Guildhall. So too was the
existential devastation, the clear-eyed, merciless refusal to transcend, of
the close. 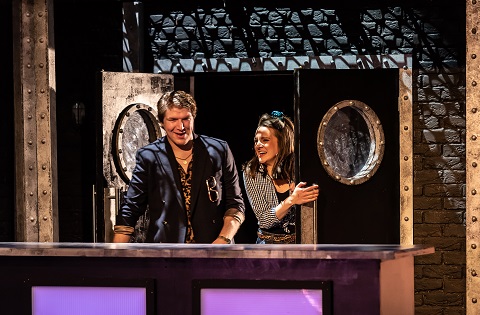 For that to be the case, of course, one needs musical drama too – indeed,
musical drama above all. This one took a little while to get going: perhaps
more a matter of opening night nerves than anything. The Silk Street
Theatre acoustic did not help, I suspect, not least when married to a
certain, rather surprising heaviness of hand – tending, in the Overture,
even to the brutal – from Dominic Wheeler in the pit. Throughout the first
act, some of his tempo choices were distinctly odd: not so much in
themselves – as a listener, one should always be willing to adapt, to
rethink in that respect – as in relation to one another. (Once again,
doubtless idiosyncratically, I thought of Boulez and his admiration for
Wagner’s Essay on Conducting, not least the claims for
proportionality rather than ‘absolute’ tempo therein.) The second act
worked much better, though, blessed by some gorgeous woodwind playing, even
if the strings were a little too often thin of tone. 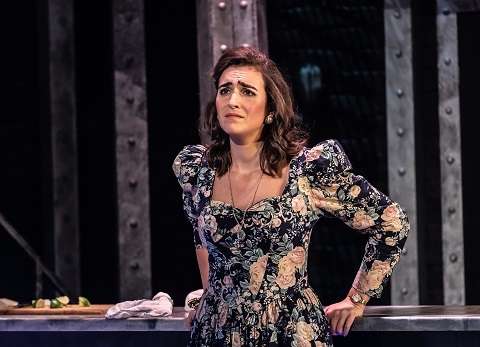 There was much both to enjoy and to admire in the singing – as there must
be, if a performance and production are to have the slightest chance of
working their dramatic effect. Carmen Artaza’s dignified, often exquisitely
spun line, trickily married – that tightrope I mentioned above between
realism and articificality – to sparky, well-defined personality proved a
particular joy as Dorabella. So too did the patent sincerity of Filipe
Manu’s Ferrando, his second-act aria truly moving, Benson Wilson’s
Guglielmo a swaggering yet not insensitive contrast. Fiordiligi will always
prove a great challenge: one to which Alexandra Lowe rose with considerable
success in a performance finely differentiated from Artaza’s, her soprano
coloratura meaningful as well as accurate. Christian Valle’s Don Alfonso
ruled the roost as he must, Zoe Drummond’s excellent Despina intriguingly
disillusioned at the close. Called upon to do far more in the way of acting
and movement than would usually be the case, members of the chorus
impressed too, individually and corporately. This, as the clichÈ has it,
was considerably more than the sum of its parts. After all, if ever there
were an opera to demonstrate both the truth and depth of what might first
appear to be, and indeed what might actually, be buffo clichÈ, it
is CosÏ fan tutte.