The answer is Unknown, Remembered: a site-specific production
which interweaves diverse materials, memories, media and meanings, and
which will be presented at this year’s

, between 4th and 9th December. I met with composer
Shiva Feshareki – who has composed a new work setting lyrics by Joy Division which, as Unknown, Remembered unfolds, will
interact with Haroon Mirza’s 2010 film The Last Tape and Handel’s
musico-dramatic characterisation of his tragic, desolate heroine – to
discuss the ways in which these varied forms of expression come together to
articulate a complex, multi-faceted, three-dimensional narrative which
charts a journey from trauma to euphoria.

Shiva begins by explaining the genesis of her own contribution to Unknown, Remembered. Spitalfields Music Festival’s Artistic
Curator AndrÈ de Ridder was keen to centre a new work around the rock band Joy Division, formed in the 1970s and fronted by singer Ian
Curtis. Shiva began exploring the lyrics of the band’s debut album, Unknown Pleasures (1979), thinking about ways of restructuring the
narrative and finding a way of assimilating and communicating the voice of
Deborah Curtis – the wife of Ian who took his own life in May 1980 aged
just 23-years-old.

The desire to present a female perspective and voice, which might counter,
engage with, reflect upon and assimilate the perspective of the male
poet-narrator of these songs, was clearly central to Shiva’s artistic aims.
But there is no ‘literal character’ in this work – which will be performed
by soprano Katherine Manley, accompanied by viola da gamba, piano and live
electronics; rather there is an accumulation of sung sentences that
gradually coalesce to form a visceral echo-chamber of memory, experience
and mediation. Shiva explains that she selected ten sentences from Curtis’s
lyrics which during her 30-minute composition are presented in different
orderings, arranged so that there is always ‘sense’ but that this ‘sense’
evolves as the permutations unfold. The use of live electronics, which
create a ‘delay’ resonance, further complicates issues of time, place,
meaning.

There is no defined ‘starting-point’ and preconceived ‘destination’; rather
there are words which infuse, cohere and conflict to create what Shiva
describes as a ‘sonic sculpture’. Linearity is rejected in favour of an
aesthetic based upon accumulation, engagement and interaction. I ask Shiva
whether there is any aleatoric dimension to the performance, and she
explains that the use of live electronics does mean that there is
an element of chance, but that it is fairly small. The chosen ten sentences
have been carefully selected and arranged, though it is the physicality of
the sound rather than its intellectual conception which is clearly at the
forefront of Shiva’s aesthetic. Sound and movement, sound and space, the
geometry of musical sound, the psychology of this geometry: these are her
preoccupations and expressive aims and stimuli.

I ask Shiva about her approach to text-setting and, in keeping with the
above described aesthetic, she speaks of the vocal line as being a spatial
concept – a sculptured musical text – in which repetitions, silences and
spaces between words define meaning. At the start of her composition the
sentences are longer and more fluid; subsequently, there is more animation,
shorter textual units, increased velocity. 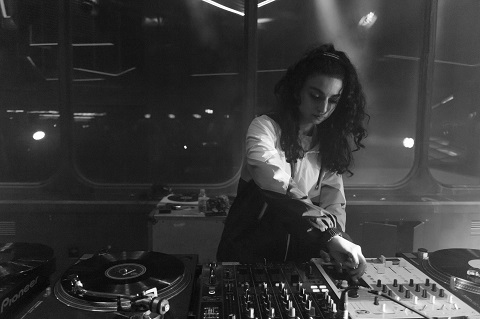 I suggest that, while Shiva feels her conception of ‘sculptured sound’ is
something new, one witnesses such ‘sound-worlds’ – the communication of
lives, minds and hearts that are defined by the sonic architecture of
voiced experience – in music from Monteverdi to the composers of the
modern-day. I mention Richard Strauss’s early operas, Salome and Elektra, Schonberg’s Erwartung, as well as the work of
Stockhausen and others who developed concepts of spatialization, not only
in electronic music: after all, Stockhausen called for new kinds of concert
halls to be built, ‘suited to the requirements of spatial music’. Shiva
agrees that Stockhausen’s aesthetic is relevant to her own work; but she
seeks a simpler, more ‘stripped back’ form of expression, one which
communicates more directly. And, she explains that the music of James
Tenney – in particular his conception of the psychology of sound, and his
use of text – has exerted a stronger influence on her own work.

We come back to the varied components which will contribute to the
audience’s experience of Unknown, Remembered. Haroon Mirza’s

was first presented in VIVID’s garage space in Birmingham’s industrial
Eastside district in 2010, and comprises film and sculpture, bringing sound
and light together to form a literal and metaphorical electric current
which is kinetic and immersive. An actor-musician, Richard ‘Kid’ Strange,
reinterprets Beckett’s last play – in which the protagonist, Krapp, looks
back at the events of his life as recorded onto tape – using previously
unrecorded lyrics written by Ian Curtis; Mirza’s film presents Strange
enacting the lyrics onto magnetic tape as the actor engages with audible
sounds created by accompanying sculptures. The latter include furniture,
radio and an LCD screen, as well as turntables which Shiva herself will
manipulate, in an improvised fashion, during the video.

Unknown, Remembered
is described by the Spitalfields Festival as being ‘site-specific’ although
Shiva explains that while the relationship between sound and movement is
always ‘specific’ to a performance venue, this aspect is not the
starting-point for the projected evening performance. It’s important to
create a work that is fluid; that can sustain and develop a ‘life’ as it
moves through time and across space. Each repetition of Haroon’s
installation involves an exploration of context and fresh experimentation
and interaction.

And, then, there’s Handel, whose dramatic soliloquy will also part of the
aesthetic mix. Emotions such as love and anger, betrayal and anger, seem to
hover over the diverse components. But, if I’m honest, I’m both bewildered
and fascinated as to how the parts might form a ‘whole’. I guess I will
have to let go of concepts such as coherence and submit to immediacy and
interaction, dialogue and dialectic, though Shiva – who leaves me to head
to the first staged rehearsal of Unknown, Remembered – is still
herself to see how the various parts might speak to each other and embody
sonically and spatially expressive architectural forms. She speaks too of
her appreciation of the unusually broad expanse of time that has been
available to develop, create and rehearse Unknown, Remembered.

For those who want a foretaste and further explication, there’s an

at 4.15pm at Chapel Royal of St. Peter Ad Vincula, HM Tower of London at
which at which Handel’s La Lucrezia will be performed, and when
AndrÈ de Ridder, director Marco ätorman and Shiva Feshareki will host a
Q&A session. Otherwise, you’ll have to wait for my cogitations after
the performance on Sunday 9th December.