The Royal Opera’s new production of Humperdinck’s H‰nsel und Gretel replaced Moshe Leiser and Patrice Caurier’s
rather dark, contemporary vision of the opera, one that was mostly aimed at
adults. On 13 December 2018, Antony McDonald’s new production was firmly on
the family-friendly side, the production notes saying that it was suitable
for children over the age of six. McDonald, who both directed and designed,
took a picture-book fairy-tale approach, yet did so with style and
intelligence.

The eponymous children were played be Jennifer Davis and Hanna Hipp with
Michaela Schuster and Eddie Wade as their parents (Wade was a very late
replacement for an ailing James Rutherford), and Gerhard Siegel as the
witch. Plus, Christina Gansch as the Dew Fairy and Haegee Lee as the
Sandman. Sebastian Weigle conducted.

During the overture, the drop curtain depicted a picture-perfect Alpine
valley, but we had two glimpses of H‰nsel, Gretel and their family, the
first happy and prosperous, the second dejected and poor, with a Swiss
clock at the top of the proscenium indicating the passage of time. The look
of the opening act was very much that of older traditional productions,
with a realistic wooden chalet and even a stove (on which Mother would
‘cook’ at the end of the act). Yet the realism only went so far, and this
was very much a fairy-tale with the family’s hard times not having any of
the dirty, sharp edges which some productions bring to it. 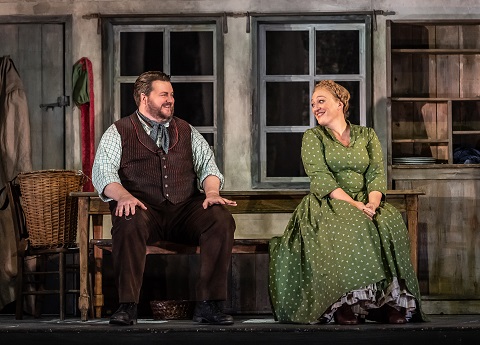 Michaela Schuster was a magnificent mother, really singing the role and
making the character quite serious yet approachable. Eddie Wade gave
sterling support as Father, a role which he only took over as short notice,
and their scene at the end of Act One was a complex delight.

As the two children, Jennifer Davis and Hanna Hipp created an engaging and
believable interaction, though these were fairy-tale children and the games
never descended into nastiness or awkwardness. Jennifer Davis sang Elsa in
the Royal Opera recent new production of Wagner’s Lohengrin [see
my review], so this was no light-weight account of the role, but Davis
brought lightness and flexibility to her performance as well as admirable
depth of tone. And she was well matched by Hanna Hipp’s engaging H‰nsel, so
that there were none of the balance problems incipient in the opera when
youthful voices collide with Humperdinck’s neo-Wagnerian orchestrations. 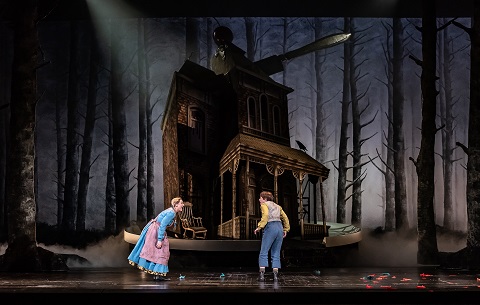 McDonald’s vision of the forest in Act Two moved us firmly away from
naturalism and into the world of fairy-tale, as his rather dark yet stylish
forest was peopled with animals and magical beings, including a striking
insect which slowly crawled up McDonald’s false proscenium, a fox with a
spade and a deer with a gun. Haegee Lee was unrecognisable as the
charmingly gnome-like Sandman who was joined by a fairy who seemed to be
the presiding genius of the forest.

The dream pantomime at the end of the act always presents a challenge for
directors, and few try to implement directly the stage directions with the
vision of fourteen angels, though here McDonald wittily gave reference to
this when the Sandman and the Fairy placed strings of cut-out angels above
the sleeping children’s heads. Instead the forest was suddenly filled with
characters from other fairy-tales by Brothers Grimm, all interacting in
unusual ways so that Little Red Riding Hood stops Snow White from eating
the apple. A charming idea, but it rather liked the cathartic emotional
climax which this scene needs.

Act Three introduced us to Christina Gansch’s delicious Dew Fairy with her
watering can, a lovely cameo. The witch’s house, when it appeared was
firmly in the haunted house category, evoking either the motel in Psycho or perhaps the house belonging to the Adams Family
. It certainly did not look like the classic gingerbread house, though
there was a giant cherry on the top. 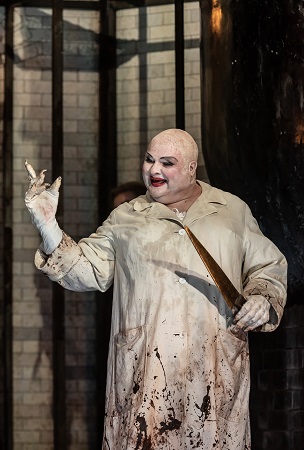 Gerhard Siegel made a cosily characterful witch, transforming from a
dirndl-clad Hausfrau into something of a mad-scientist in charge of the
complex chocolate-making apparatus contained within the witch’s house.
Siegel sang well, and if you have to have Rosine Leckermaul played by a
man, then this was perfectly admirable though I still prefer having her
sung by a mezzo-soprano (that said, the one time I heard a counter-tenor
singing the role was memorable indeed). The scene was delightful rather
than disturbing or scary, and the climax was very much the moment when
Rosine was pushed into the chocolate vat, its subsequent explosion and the
witch’s reappearance as a chocolate figure!

The children at the end, all chocolate covered, were played by members of
the ROH Youth Opera Company.

Sebastian Weigle drew a richly romantic account of the score from the Royal
Opera House Orchestra, making the music form a fine part of the overall
fairy-tale.

I have to confess, that I rather prefer my productions of H‰nsel und Gretel to have something of a psychological edge to
them, but if you want pure fairy-tale then this production does it with
great imagination.