Venus Blazing
, is a pledge that during this academic year, of the operatic, classical
and jazz music performed, at least 50% will be by women composers. One can
see why Thea Musgrave thought that A Christmas Carol had
musico-dramatic potential. There are ready-made ‘set-pieces’ such as the
Christmas parties and the Cratchits’ lament; the characters are larger-than
life, ‘operatic’, though they are never caricatures – this is a very human
story. Moreover, it’s one that speaks to and of our time as much as
Dickens’ own. A growing gap between rich and poor, homelessness, poverty,
food banks: plus Áa change? In Dickens’ parable, Ebenezer Scrooge
– a man of ‘grasping, scraping, clutching’ greed, suffers a dark night of
reckoning which leads him to right his wrongs and make recompense: perhaps
a few venture capitalists, chief executives and stock brokers might take
note.

One can understand, too, why the opera lends itself to a student
performance. Musgrave’s vocal lines are eminently sing-able, the
inflections natural and persuasive. With role-doubling, the opera can be
performed by a cast of just seven, but there are more than forty characters
offering opportunities for a large cast to get involved and supplying some
handy supernumeraries for the scene-shifting. 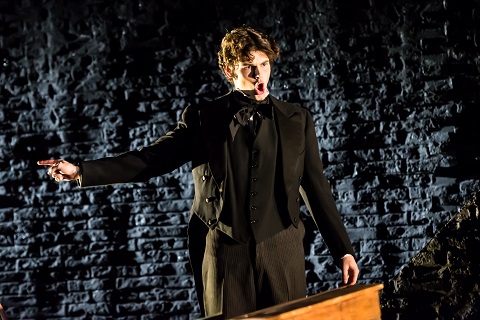 Not that there was much of the latter in Jennifer Hamilton’s production;
Scrooge would surely have approved of the frugality of Ian Sommerville’s
designs which made economical use of a few props – a ledger desk, a kitchen
table, a curtained four-poster, a sumptuous armchair – to identify the
narrative’s locales, as we moved from Scrooge’s workplace and home, to the
Cratchits’ and Fezziwigs’ dwellings, and through London’s streets which
thronged with charity collectors, factory girls, delivery boys,
rag-and-bone men, city gents and urchins.

A back-wall of crumbling brick, Sommerville’s dramatic use of shadow and
Jack Sommerville’s DorÈ-inspired projects evoked the bleakness of
mid-Victorian London, the grim, fog-bound reality occasionally alleviated
by a symbolic splash of colour, such as Tiny Tim’s trailing crimson scarf.
The realism took a surreal turn with the ghostly visitations, as the eerie
Spirits climbed a central staircase to trouble the sleeping Scrooge with
memories of childhood suffering and visions of the cemetery where he would
be lain to rest, unloved, un-mourned. After such darkness, the bold
brightness of the concluding Christmas Party was as transformative as The Wizard of Oz’s technicolour.

Space considerations led conductor John Pryce-Jones to pare down Musgrave’s
chamber orchestra scoring still further, and with just one string player
per part the instrumental textures were rather wind-dominated, with
strongly defined piano and harp contributions, though the strings were
silkily sentimental when required. The large percussion section, positioned
stage-right, issued a brutal battering during Scrooge’s breakdown at the
end of the first Act and pounded a spine-chilling warning when the Spirit
of Christmas Future appeared, accompanied by the wretched figures of
Poverty and Want. In many ways it is Musgrave’s instrumental music that
tells the story – bells ring out the strange retrograde of Scrooge’s
surreal nightmare and a clarion peal colours the concluding Christmas feast
– and the score was finely played. Pryce-Jones was alert to every detail
and created strong narrative impetus. 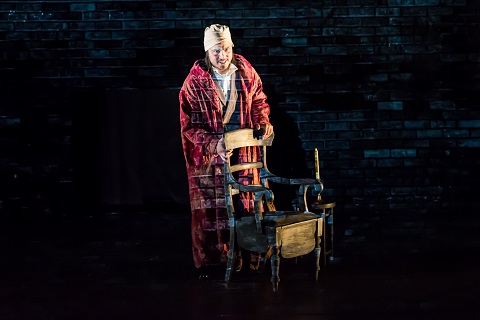 Giuseppe Pellingra’s Ebenezer Scrooge trod a convincing path from bullying
to benevolence, acting courageously with voice, body and soul. He found a
range of colours to convey the miser’s belligerence and spitefulness, his
baritone glowing with a darkness that cowered Scrooge’s employees and
repelled his relatives. Pellingra worked hard with the text – the diction
of the cast was unanimously excellent – and was not afraid to spit and
snarl. If occasionally the phrasing lacked refinement or there was a little
coarseness of tone, then perhaps that’s how it should be as Scrooge
defiantly scorns the visions of his past misdemeanours. But, his
reflections on his errors require a greater lyricism if they are to
persuade us of the conversion of Scrooge’s cold heart.

Sandeep Gurrapadi’s tenor bloomed with paternal warmth at the heart of the
Cratchit family home as Bob hugged Rachel Maby’s colourful, good-humoured
Mrs Cratchit and teased his children, who were vividly characterised and
richly sung by Sofia Celenza (Belinda), Megan Linnell (Martha), Blaize
O’Callaghan (Harriet) and Oliver Kotla (Peter). Gurrapadi’s deeply
expressive response to the death of Tiny Tim (William Beckingham-Hughes)
was equalled by the eloquence of the ensemble lament. 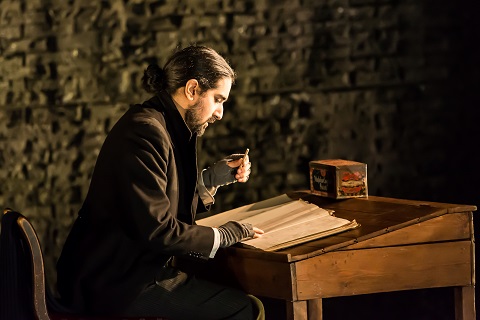 There was much strong characterisation. As Scrooge’s nephew, Fred, Theo
Perry sang with a lovely freshness and clarity, and acted convincingly as a
younger Scrooge. Belle’s extended scene, in which her neglect and rejection
by Scrooge are re-enacted, was sung with compelling intensity by Arianna
Rebecca Firth, accompanied by some passionate string playing. In
ash-flecked white tails and top hat, Lars Fischer cut a Mephistophelian
figure as Marley’s Ghost, issuing stentorian spoken warnings. Scrooge’s
sister, Fan, was neatly sung by Valva DatenytÈ.

The harrowing hauntings by the Spirits of Christmas Past (Eleanor Strutt, a
Grim Reaper who ripped a post from Scrooge’s bed to use as a staff of
admonishment), Present (Isabella Morgan, who emerged clad in emerald
foliage, from the forest of Scrooge’s nightmare), and Future (Melissa Davies)
were strikingly sudden and stark. Morgan and Strutt joined Michael Collins
(Mr Fezziwig) and Nicola Jane Roberts (Mollie) in the dancing at the
Fezziwigs’ family party, and Musgrave offered further, similarly rousing,
pastiche during the final festivities when Fred, his wife Rosie (Liberty
Spears) and other relatives (Anna Marmion as Lucy, Eleanor Rosser-Smyth as
Vickie, Rose Clarke-Williams as Bertie, Rachel Colley as Aunt Louise)
entertained themselves with parlour songs and charades.

The final scene was a comforting Christmas card tableau as the Spirits took
up position within a gilded frame above the roaring fireplace. Merry
Christmas one and all. Though I’m not sure that Scrooge’s scissor-kick of
glee was quite apt: Dickens was as much preacher as novelist, and Ebenezer
Scrooge needs to have psychological credibility. And, Dickens’ fight has
not yet been won, as Margaret Atwood has suggested, ‘“Scrooge Lives!” we
might write on our T-shirts.’