This was the second concert in the Hall’s


which began in September. Curated by pianist Iain Burnside, the series is
bringing repertoire by leading Russian composers from the mid-19th to the
mid-20th centuries to the UK concert platform, allowing us an opportunity
to hear infrequently performed songs by composers such as Myakovsky,
Gretchaninov, Cui, Glazunov and GliËre.

interview
, Burnside identified some of the ‘themes’ which unite this rich repertoire
and what he described as ‘the vocabulary of star gazing, breast beating and
soul searching’ was certainly in evidence here. There is an operatic
intensity and scale about many of these songs, as Burnside’s two musical
partners – the Ukrainian tenor Dmytro Popov and Lithuanian mezzo-soprano
Justina Gringyt? – confirmed in performances of
drama, vivid characterisation and colour.

Both singers have powerful voices and can unleash a full-throated intensity
which ease. Popov’s lyric tenor is beautiful of tone, generally steady of
intonation – there was just an occasional wavering from the centre of the
note at phrase-end climaxes – and rises to the top without strain. Relaxed
and singing with obvious enjoyment, he took great care with the Russian
texts, bringing words and notes together with engaging focus and clarity,
though perhaps not always capturing the tender simplicity and sincerity of
some of the more folk-like songs.

Gringyt? sings with a fervour and power which, in the intimate environs of
Wigmore Hall, were at times somewhat overwhelming, but the vibrant energy
which I noted when I saw the mezzo-soprano perform the role of Preziosilla
in David Pountney’s WNO production of

in March this year was equally impressive here. Gringyt?’s tone,
particularly her chest voice, is marvellously rich and she used her
unwaveringly secure technique to luxuriantly amplify the sound,
communicating the emotional tortures and raptures expressed in some of
these songs with a soul-engulfing intensity – although sometimes there was
a shrillness as her mezzo rose and she reached ever deeper in the music’s
wells of agony and suffering. The astonishing strength of her voice was,
however, advantageous in controlling the softer phrases, the moments of
vulnerability and gentleness, and like Popov, Gringyt? was unfailingly
attention to the texts.

Beside such drama and extroversion – and, at times, exaggeration – Iain
Burnside himself adopted an assuming, supportive role. He was a quietly
reassuring presence (the Steinway lid was only slightly raised), but, the
piano accompaniments were ever sensitive to the singers’ needs and nuances,
and Burnside’s thoughtful expressivity in the piano preludes and postludes
defined wonderfully discrete environments from which he sung dramas could
emerge. 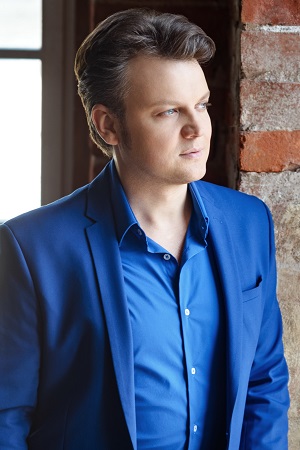 Tchaikovsky wrote romances throughout his career, his hundred or so songs
spanning from his early years as a student at the St Petersburg
Conservatoire to the Op.73 set of 1893, the year of his death. In selecting
his texts, he generally avoided the work of the great Russian poets, such
as Pushkin or Lermontov, preferring to set poetry by writers such as Daniil
Rathaus, Aleksey Konstantinovich Tolstoy, Ivan Zakharovich Surikov, whose
lyrics we heard here, and he also had a penchant for the poems of the Grand
Duke Konstantin Romanov. CÈsar Cui suggested that Tchaikovsky viewed poetry
as a ‘necessary evil’ in the process of song composition, but his settings
of Lev Alexandrovich Mey’s translations of Heine, which framed the
sequenced presented here, seemed rather to demonstrate an instinctive,
uncomplicated response to text which inspired directness of melodic
expression. Popov sculpted a strong line in ‘Khotel by v jedinoje’ (I wish
I could pour into a single word (the translations, from the Cyrillic and
into English, were not credited)) and in ‘Otchevo?’ (Why?) built the short,
questioning phrases to a powerful concluding climax, ‘Why, oh tell me right
now, did you leave me and forget me?’. Popov sang three of the Op.73
settings of Rathaus, beginning ‘Mi sideli s toboy’ (We sat together) seated
stage-left besides Gringyt?. But, after Burnside’s unsettling bass line and
wandering minor harmonies had delineated the storm which embodies, in its
driving rain, the protagonist’s grief and tears, he moved to the centre –
‘once again, as before, I’m alone’ – his loneliness exacerbated by the
cruelly growling piano bass. ‘Zakatilos solntse’ (The sun has set) was full
of persuasive passion, the final phrase almost exploding with the lover’s
boundless joy, while ‘Snova, kak prezhde, odin’ (Again, as before, alone),
a song which is gently propelled the piano’s repeating rhythmic motif, came
to a quieter, more poignant point of rest: ‘Say a prayer for me. I am
praying for you.’ Popov combined an even middle-voice and controlled
head-voice effectively in ‘Mochi bezumnye’ (Frenzied nights), capturing the
oppositions of the protagonist’s recollections of love.

Gringyt?’s dynamic and coloristic range were immediately apparent in ‘Uzh
gasli v komnatakh’ (The lights were going out in the rooms), the drama of
memories of ardent love being tempered by the piano’s poised repetitions
creating an almost Chekhovian resignation. ‘Kaby znala ya’ (If only I had
known) grew from the piano’s high, delicate tapestry-weave – with Gringyt?
seated, eyes cast downwards – to a quasi-hysterical expression of
disillusioned love culminating in a terrible cry of pain, ‘If only I’d
know, I’d realised’ that could not be assuaged by the return of the piano’s
subtle sparkling. The latter now seemed hollow and haunting. This song is
the first of seven which form Tchaikovsky’s Op.47 set, and Gringyt? also
presented the final song, ‘Ja li b pole da ne travushka byia’, known as
‘The Bride’s Lament’. The latter was inspired by the duet between Christ
and Mary Magdalene in Jules Massenet’s oratorio Marie-Magdeleine
which Tchaikovsky described in a letter of 1880 to his benefactor Nadezhda
von Meck as a ‘masterpiece’: ‘The duet between Jesus and Mary Magdalene
touched my very self and even led me to shed tears.’ Disbelief, woe,
suffering, despair: the emotional trajectory, which Gringyt? did not just
delineate but also seemed to ‘live’, was again projected with immersive
power and intensity. The rhapsodic expressivity of the Op.63 ‘Serenade’, in
contrast, occasionally had a folk-like tint and the mezzo-soprano showed
that she could withdraw to a sweet thread of sound to convey dreamy
introspection: ‘Sleep then, darling girl, and surrender to the harmonies of
my serenade.’ 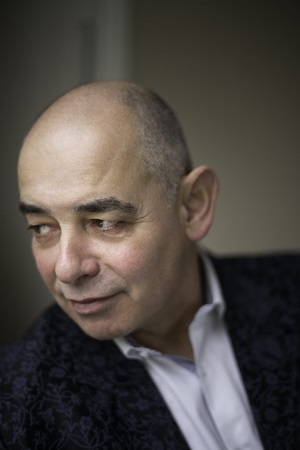 In the sequence of songs by Rachmaninov which followed the interval, I was
impressed by the way that Burnside was able to maintain a dramatic impetus
within each song, and from song to song, despite the heavy emotional weight
of the texts and the richly expressive explorations of the piano parts. A
lovely bloom coloured Popov’s rendition of ‘Ne poj, krasavica, pri mne’
(Sing not to me, beautiful maiden’, and his strong high notes were further
injected with a flash of vigour by the piano’s final flourish. ‘Ne ver mne,
drug!’ (Don’t believe me, friend!) had impulsiveness, youthful drive and
passionate heroism worthy of Pushkin’s Lensky. The sinuousness of the
piano’s prelude to ‘Khristos voskres’ (Christ is risen) was complemented by
Popov’s purposeful declamatory focus as he described a world ‘soaked in
blood’ and a hymn sung before an altar which ‘sounds so insulting and
unjust’. I thought that Burnside might have unleashed even more emotional
thunder at the end of ‘Ya opya’ odinok’ (Again I am alone), where the
piano’s final fantasia expresses a despairing alienation so powerfully
communicated by Popov but the pianist did conjure a surging current at the
start of ‘Vesennye vody’ (Spring waters) where again the tenor’s steadiness
and strength were admirable.

The agility of Gringyt?’s lower voice was apparent at the start of ‘O, ne
grusti’ (O, do not grieve) though more restraint subsequently would have
allowed the countering rhythm presented in the piano’s bass to make its
expressive mark more readily. In ‘Jest’ mnogo zvukov’ (There are many
sounds), however, Burnside really did rise to meet the vocal drama before
expertly shaping the subdued close. The mezzo-soprano adopted a less
rapturous mode in ‘Pred ikonoj’ (Before the icon), shaping the line with
delicacy and delineating the ‘night’s silence’ and the flickering of the
icon-light with floating beauty and reverence. And, ‘K detjam’ (To the
children) was wonderfully personal and direct, the line simple and true.

It was the three songs by Medtner, though, which were most compelling, as
the music – with its complex piano writing and sense of continuous
development and searching – seemed to invite a greater freedom of rhythm
and emotional colour from Gringyt?. The heart’s flights and sighs were
conveyed by a judicious rubato at the start of ‘Ne mogu ja slyshat’ ’etoj
ptichki’ (When I hear birdsong); the full piano chords which open ‘Nash
vek’ (Our age) inspired powerful declamatory rhetoric from Gringyt?. Bu, it
was in ‘Bessonitsa’ (Sleeplessness) that the sophistication of Medtner’s
writing was most apparent. The interaction of voice and piano is detailed
and complex and Burnside listened meticulously as the piano’s repetitions
supported the vocal line as it withdrew with weariness, languorously shaped
by Gringyt? who exploited a great range of colour. The emotional palette
was further enhanced by the piano’s beautiful closing vocalise.

Gringyt? and Popov proved perfect advocates for these Russian romances,
conveying an innate empathy with the ‘voice’ of these songs which seem to
grow out of the experiences and history of the Russian nation itself.

Rusalka at the Teatro Real in Madrid