Gershwin’s folk opera, with a libretto by Ira Gershwin and DuBose and Dorothy Heyward, has been accused of many wrongs­–cultural appropriation, propagation of minority stereotypes, too many musical-like numbers. One can refute or accept these assertions, but Gershwin’s love for the music of the black South Carolina population, among whom he spent a whole summer composing, bursts through his scintillating score. So does his admiration for their strength in the face of adversity. The residents of Catfish Row continue to speak to new generations because they struggle with ever-relevant issues­–intergenerational poverty, addiction and violence. At the same time, the solidarity within this marginalized community is uplifting. Although poor, they don’t think twice about donating money for a funeral or raising an orphaned child as their own. At the heart of this communal portrait is the disabled beggar Porgy, whose unstinting efforts to keep Bess away from cocaine and her no-good boyfriend Crown are nothing short of heroic.

Booming bass-baritone Eric Owens as Porgy started out a bit stiffly, but his voice freed up after the optimistic banjo ditty “Oh, I got plenty o’ nuttin”. For the love duet, “Bess, you is my woman now”, Owens was in resplendent voice, matched by the full, penetrating soprano of Adina Aaron as Bess. In the final scene, when Porgy discovers that Bess has left for New York with her drug dealer, Owens was heart-rending, releasing a flood of raw emotion that left him visibly drained at the curtain call. Besides singing formidably, Aaron encompassed all aspects of the tragic Bess–her physical attractiveness, kindness and ongoing struggle against her weaknesses. Bass-baritone Mark S. Doss was to sing the violent Crown, but had to cancel due to illness. Luckily, DNO was able to fly in Nmon Ford from the States to replace him. Ford, who had sung the role in London, was wholly persuasive as the brutish drunk who kicks off the plot by killing a man over a game of dice. When, on the run from the law, Crown seduces Bess away from Porgy, he was sexy and dangerous. He and Aaron made the stage sizzle. Perhaps fighting jetlag, he seemed to tire towards the end and did not have enough volume to project the racy “A red-headed woman”. 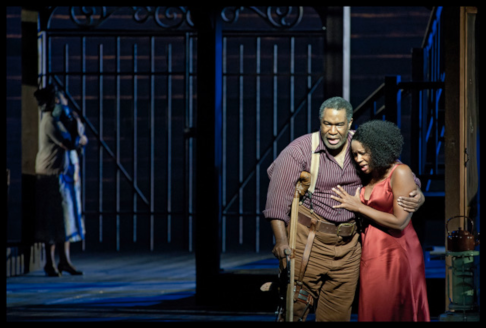 Tenor Frederick Ballentine was a class act as the slippery cocaine dealer Sportin’ Life. He turned the irreverent sermon “It ain’t necessarily so” into a spectacle of vocal suppleness and style. Another star turn was Latonia Moore’s golden-voiced Serena, harrowing as the keening widow in “My man’s gone now” and powerful when leading the faith healing session for the ailing Bess. Donovan Singletary and Janai Brugger were an engaging Jake and Clara, her soprano clear as a bell in the lullaby “Summertime”. The powerhouse Maria of mezzo-soprano Tichina Vaughn put Sportin’ Life in his place with a flawlessly inflected “I hates yo’ struttin’ style”. The singing got even better in the ensembles, above all in the rousing spiritual harmonies. The especially assembled chorus, more a set of soloists really, also took the smaller roles. They were all taken beyond reproach, with outstanding performances by tenor Ronald Samm as Peter the honey seller and sopranos Sarah-Jane Lewis and Pumza Mxinwa as, respectively, Annie and Lily. As a chorus they were galvanizing, deeply moving as mourners at the wake, infectious in foot-tapping numbers such as “Oh, I can’t sit down”. As for the Netherlands Philharmonic Orchestra under the expert baton of James Gaffigan–they got rhythm. Gaffigan approached the score respectfully while delighting in its exhilarating mix of jazz, Jewish religious melodies and spirituals. All sections of the orchestra were firing on all cylinders from the first bar, but special honors go to the killer xylophone.

Director James Robinson’s straight-up staging does not hold any surprises. The picturesque set, a wooden skeleton of the once genteel, now run-down, residences occupied by stevedores and fishermen, is beautifully lit to evoke the different times of the day. It revolves to reveal the boats at the waterside. Both design and direction seem to aim for a benign realism, although there were moments of heightened drama, such as when Porgy kills Crown. The large cast is directed to go about their daily business, but the choruses have a stand-and-deliver feel. The church picnic needed more dynamic choreography, the hurricane scene more differentiated blocking. The sameness extends to the costumes, which retain their attractive earth tones throughout. Not even the picnic merits a Sunday best palette. More detail and variety would have enhanced the performance, which, despite sensible cuts, was close to three hours long. However, the singing was the thing. I’d recommend anyone nearby to catch this show, but all performances are sold out.