When Mew died in 1928, the obituary in the local newspaper was painfully
terse: ‘Miss Charlotte Mary New [sic], … a writer of verse.’ Today, while
Mew’s poetry is admired by a small but ardent group of devotees, her name
remains largely unfamiliar, although a forthcoming biography of Mew by

Julia Copus, to be published by Faber, will bring the poet’s life and work into the
public eye.

It was a life of tragedy and torment, illness and incarceration. Mew’s aunt
and uncle, on her mother’s side, both suffered from insanity and were
institutionalised. Of the seven children of Frederick Mew, a struggling
architect, and Anna Kendall Mew, only four survived childhood. When she was
nineteen, Charlotte’s eldest brother, Henry, afflicted by what would now be
diagnosed as schizophrenia was sent to a mental institution, where he spent
the last thirteen years of his life. Charlotte’s younger sister, Freda,
then in her early teens, was similarly plagued. Financial hardship followed
Frederick’s death in 1898 and Charlotte, her sister Anne, and their mother
moved into a rented home, subletting the upper floor and eking out a frugal
existence. Her mother died in 1923, and when Anne succumbed to cancer four
years later Charlotte began to suffer from delusions. When, in February
1928, she was diagnosed as neurasthenic, she voluntarily entered a nursing
home, where on 24 March she committed suicide by drinking Lysol.

Diminutive, prone to wearing dull men’s suits, swearing and smoking with
equal vigour, Mew must have cut an odd figure even among the poets who
gathered at Monro’s Poetry Bookshop. Mew apparently told her friend Alida
Monro that she and her sister had determined early in life ‘that they would
never marry for fear of passing on the mental taint that was in their
heredity’ – perhaps influenced by the prevailing new theories in eugenics.
Her lesbianism only intensified her feelings of isolation and alienation. 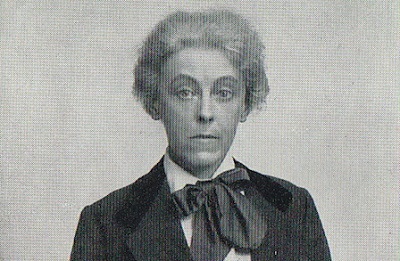 However, beneath her reserved and reclusive manner, passion burned
fiercely. Though reluctant to recite her poetry at public readings, when
she did accept an invitation Mew startled the audience: ‘They sat facing
the little collared and jacketed figure, with her typescripts and
cigarettes … Once she got started (everyone agreed) Charlotte seemed
possessed, and seemed not so much to be acting or reciting as a medium’s
body taken over by a distinct personality. She made slight gestures and
used strange intonations at times, tones that were not in her usual
speaking range.’

Mew’s poetic voice is soon to be heard again, in a new expressive form.
Composer Kate Whitley has set six of Mew’s poems for soprano, bass and
strings, and these songs will be presented as part of a special concert at

. The programme has been curated by bass Matthew Rose, and brings together
soprano Katherine Broderick, pianist Anna Tilbrook and violinist Jan
Schmolck to celebrate music for voice commissioned by the Michael Cuddigan
Trust. Also on the programme is the world premiere of a new work by David
Bruce, plus Martin Suckling’s Songs from a Bright September, works
which were similarly commissioned by the Michael Cuddigan Trust, of which
Rose himself is a trustee. Rose comments, “Michael Cuddigan, along with his
wife Anne, were so kind to look after me as a student in Aldeburgh for many
years. Michael had the most amazing love for music and musicians, and we
started this Trust five years ago in his memory. I’m greatly looking
forward to this exciting evening of new works performed by some of the
country’s leading musicians.” 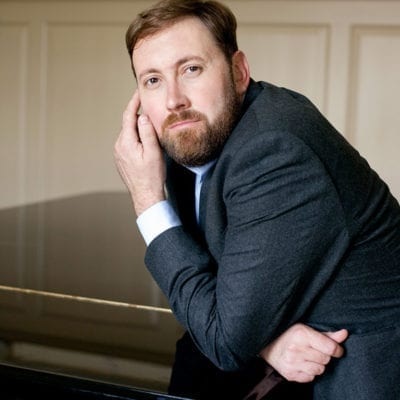 Kate is a composer-pianist and co-founder of The Multi-Storey Orchestra,
which, from its base at Bold Tendencies car park in Peckham, takes
professional performances to local schools and further afield. She has
frequently striven to take classical music into new contexts and before new
audiences. Her concert piece, Sky Dances, was performed at
Trafalgar Square as part of a programme that brought together the LSO, the
Guildhall School of Music and Drama, and 70 young musicians from East
London. Paws and Padlocks, a children’s opera about two children
who get trapped overnight in a zoo, was performed at Blackheath Halls in
2016, while Speak Out, which set words by Malala
Yousafzai, was performed by BBC National Orchestral and Chorus of Wales on
International Women’s Day 2017 in support of the campaign for better
education for girls. NMC Recordings released a CD of her music,

I ask Kate what it was that had drawn her to Mew’s poetry. She explains
that the initial impetus came from Sir Stephen Oliver, a Trustee of the
Michael Cuddigan Trust and the great-nephew of Mew’s life-long friend Ethel
Oliver, who got in touch with Kate and, giving her copy of Mew’s collected
works, suggested that she might compose some settings. Kate had never heard
of Mew but found the poems instantly appealing and absorbing; she discussed
Mew’s work with Julia Copus, whose knowledge and love of the poems were of
enormous value as she guided Kate’s selection of three poems, her choice
being influenced by length and theme. ‘The Farmer’s Bride’ was framed by
two shorter poems, ‘Rooms’ and ‘Sea Love’, and these

were performed by Matthew Rose and the Albion Quartet in Orford Church in
June 2017. Kate has now composed three further settings – ‘I So Like
Spring’, ‘Absence’ and ‘Moorland Night’ – which will be sung by Katherine
Broderick on 30 April.

Mew strips bare the inner lives of her poet-speakers, with often painful
honesty. There is a driving tension between restraint and release – as if
Mew wants both to speak out and hold back. Images of confinement allude to
the social structures which force women into emotional, physical and
financial dependency on men. But, for all her personal idiosyncrasies, Mew
was no ‘New Woman’, and remained a Victorian in her social outlook,
lamenting the loss of old certainties as the world moved forward into the
age of modernity, of uncertainty and crisis. I wonder whether Kate finds,
as I sometimes do, the wrought emotional intensity of Mew’s poems somewhat
overwhelming? On the contrary, Kate tells me, that it was this very
intensity, conflict and rawness which she found so moving. 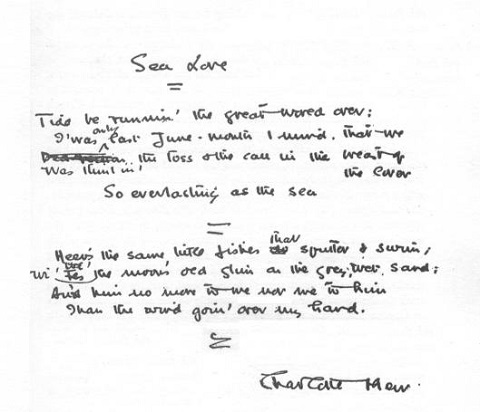 Alida Monro reproduced this corrected manuscript of Sea Love in the 1953 Collected Poems. The manuscript is now in the Buffalo Collection.

She was, though, initially a little daunted to be confronted with texts so
different from anything else she had previously set to music. The rhyming
couplets of ‘The Farmer’s Bride’ and the regularity of the form of ‘Sea
Love’ seemed to demand regular phrase shapes, an approach to text-setting
which was contrary to Kate’s usual, instinctive practice. But, in the
event, the way the poetic form imposed itself upon the musical form was a
positive stimulus, for it seemed to offer a way of capture the tenor of
Mew’s world and our distance from the historical past: “It felt natural to
compose in this way; it was the best way to communicate what the poem
says.”

‘The Farmer’s Bride’ is a man’s account of his marriage to a woman who
rejects his attentions and demands. One night she escapes but is hunted
down by her husband and other villagers who find her among a flock of
sheep. The crowd ‘caught her, fetched her home at last/ And turned the key
upon her, fast’. She submits to the conventions of domesticity, ‘So long as
men-folk keep away’, and each night climbs a stairway: ‘sleeps up in the
attic there/ Alone, poor maid’. I wonder if Kate hears the speakers in
Mew’s poems as being male or female? The speakers in Kate’s second set of
poems could be either, she says, but it’s a male voice we hear in ‘The
Farmer’s Bride’. We never actually hear the voice of the young girl after
whom the poem is named, and this is the point – she is described from the
male point-of-view, a ‘madwoman in the attic’:

Three summers since I chose a maid,

Too young maybe—but more’s to do

At harvest-time than bide and woo.

When us was wed she turned afraid

Of love and me and all things human;

Her smile went out, and ’twadn’t a woman— 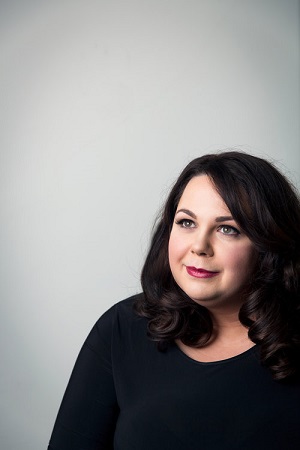 The image of the locked room or enclosed space recurs repeatedly in Mew’s
poems, exposing her loneliness, and we find it elsewhere in Kate’s
settings. ‘I remember rooms that have had their part/ In the steady slowing
down of the heart’ says the speaker in ‘Rooms’, noting that ‘The room is
shut where Mother died’. The word ‘shut’ reappears in ‘Absence’ – ‘In
sheltered beds, the heart of every rose/ Serenely sleeps to-night. As shut
as those/Your guarded heart;’ – and ‘Moorland Night’: ‘My eyes are shut
against the grass’.

These poems have a dramatic lyrical tone, but the rhythms are restless as
the forms frequently juxtapose extremely short and long lines which tug
against the underlying meter, and the rhyme schemes are complex. I wonder
whether these formal idiosyncrasies were disinclined to lend themselves to
musical setting? Again, Kate seems to have found such elements creatively
inspiring. She describes the way in which the voice and strings work
together, sometimes the voice leading and the strings accompanying,
elsewhere the strings coming to the fore between the lines or at the end of
stanzas, and this seems to me to imitate the restless conflicts and
tensions within the poems.

‘Moorland Night’ is the final poem in The Farmer’s Bride. Here,
Mew seems to find resolution in nature:

My face is against the grass – the moorland grass is wet –

My eyes are shut against the grass, against my lips there are the little
blades,

Over my head the curlews call, And now there is the night wind in my hair;

My heart is against the grass and the sweet earth, – it has gone still, at
last;

It does not want to beat any more,

And why should it beat?

This is the end of the journey.

The Thing is found.

In an essay, ‘The Poems of Emily BrontÎ’, which is printed in Mew’s Collected Poems & Prose, Mew described BrontÎ as ‘a
self-determined outlaw’, ‘a soul which scorns the world with masterful
persistence and disclaims all comradeship save that of the “strange
visitants”’. BrontÎ’s poetry is, she says, ‘dominated by a note of pure
passion … a passion untouched by mortality and unappropriated by sex, the
passion of angels, of spirits, redeemed or fallen, if such there be and
sorrow of an ever-unsatisfied desire, she looked out upon the world, which
the sad circumstances of her environment, together with the gloomy bias of
her nature, showed so dark, with a curious indifference and mistrust’.

These words might equally describe Mew and her own poetry.

Kate Whitley’s
Six Charlotte Mew Settings can be heard at