Indeed, a tale of a secluded, blind princess kept ‘in the dark’ about her
affliction by an overprotective (oppressive?) father, and thus denied the
life and love that might cure her, has more than a touch of Angela Carter
about it. Tchaikovsky’s tale of Princess Iolanta’s physical and spiritual
awakening was fashioned by Tchaikovsky’s brother, Modest, from Danish
playwright Henrik Hertz’s drama ‘King RenÈ’s Daughter’, and while the
libretto is hampered by some mawkish medieval allusions, any sentimentality
is outweighed by the moving portrait of Iolanta’s sadness, suffering and
sensuality.

Director Oliver Platt and designer Alyson Cummins suggest the young girl’s
latent passion with minimal but effective means. A glasshouse bursting with
verdant life intimates heated emotions and senses – colours, scents,
tactility – which are the stuff of a life denied to Iolanta by the
ProvenÁal King RenÈ, who has threatened anyone who mentions sight or light
with death, betrothed his daughter to Robert Duke of Burgundy (who wants
out of the contract, so that he can marry his beloved Mathilde), and
forbidden access to Iolanta’s garden. The ladies-in-waiting wear simple
frocks that resemble nurses’ gowns, but their blue surgical gloves suggest
a clinical coldness. 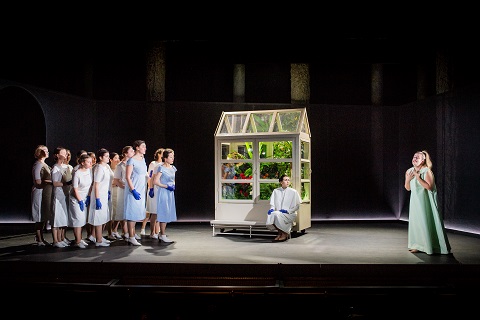 Samantha Quillish sang Iolanta’s arioso lines with delicacy in the opening
garden scene, conveying the princess’s gentleness and purity, but her
soprano has both depth and darkness and grew in fervency as Iolanta’s
sensuality was awoken, passivity giving way to nascent but intense passion.
As her father, Thomas Bennett made a good effort to strike a balance
between the King’s patriarchal domination and paternal devotion, and
demonstrated a pleasing bass, but one which still needs to develop a little
more firmness and focus.

The two interlopers who bring light and life into Iolanta’s world brought
energy and colour to the drama too. As VaudÈmont – who ‘opens’ Iolanta’s
eyes and to save whose life she agrees to undergo a cure for her blindness
– Shengzhi Ren sang with power and ardency, and generally good intonation –
just occasionally when rising to the heights he was a little under the
note, but this was more than compensated for by vibrancy of tone and
dramatic commitment. His extended duet with Quillish was rapturously
redolent with hope and promise. Sung Kyu Choi brought vocal agility and
colour to Robert’s single aria. Best of the chaps, though, was Darwin
Leonard Prakash as Ibn-Hakia; the doctor’s monologue was notable for its
expressive directness and strength of line. 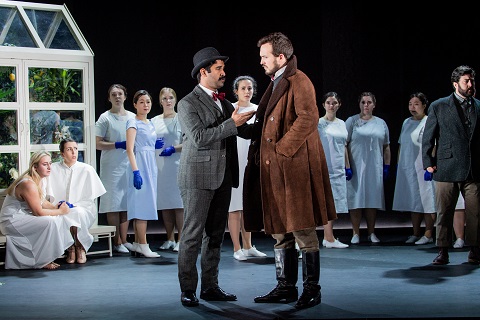 The smaller parts were well-sung. Leila Zanette had presence as Marta, and
the light, fresh voices of Emilie Cavallo and Yuki Akimoto, as Iolanta’s
friends Brigitta and Laura respectively, blended sweetly. The roles of
AlmÈric, armour-bearer to King RenÈ, and Bertrand, door-keeper to the
castle were competently assumed by Joseph Buckmaster and Niall Anderson.

There were some directorial mysteries and mis-hits, though. While thereis an otherworldly stillness, reminiscent of PellÈas et MÈlisande, about Tchaikovsky’s final opera,
the immobility of the RA chorus members – who seemed pretty much left to
their own devices – was a weakness. More seriously, Platt seemed determined
to make a ‘point’ at the close, but it wasn’t one that was in accord with
the opera’s most obvious ‘meaning’. In the aforementioned climactic duet
for Iolanta and VaudÈmont, as the latter tries to explain the meaning of
‘light’ Iolanta insists that she does not need light in order to worship
her God – and Tchaikovsky’s score goes into orchestral-illumination
overdrive. In a ‘conclusive’ choric statement, the ensemble shares in the
transfiguration of Iolanta’s vision. So, she, and they, and we, see the
light in all senses of the phrase. Here, the princess’s enlightenment was
accompanied not by a blaze of illumination but by a night sky, sparkling
with celestial bodies. Well, it suggested spiritual fulfilment and rapture.
But, Platt’s parting comment was to have Iolanta collapse in whimpering
distress as the dawn sun rose. Surely, her new perception comes from love,
not from literal vision. Is Platt suggesting that the former was false or
illusory? If the production had been braver, it might have essayed a ‘dark’
ending by suggesting that Iolanta – like Pannochka in May Night
(which Royal Academy Opera performed in

) – is really ‘of this world’, and cannot form a true relationship with
VaudÈmont; in which case an ambiguously bleak ending might have been more
convincing. 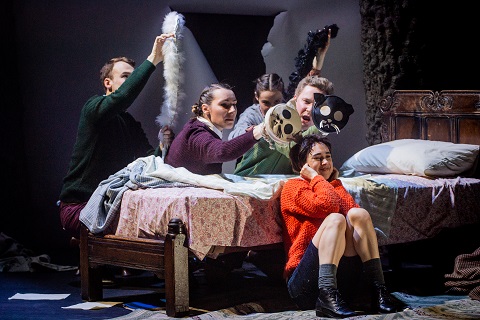 By contrast, the illusions and disillusionments of childhood were depicted
with unflinching honesty, in a beguiling production of Ravel’s L’enfant et les sortilËges, in which Olivia Warburton’s superb
embodiment of the mÈchant’s journey from adolescent solipsism to a
more mature empathy winningly balanced humour and pathos. Warburton – whom
I have recently admired as Ino in the RAO’s


– sang with a pure tone – and lovely limpid French diction – that conveyed,
initially, self-conviction and indignation, and latterly, vulnerability and
awakening. She stomped, rioted, flinched and cowered with gamine gall and
gullibility as l’enfant’s dreams of freedom morphed into a fearful
dread, and the garden of promise became a gothic prison. 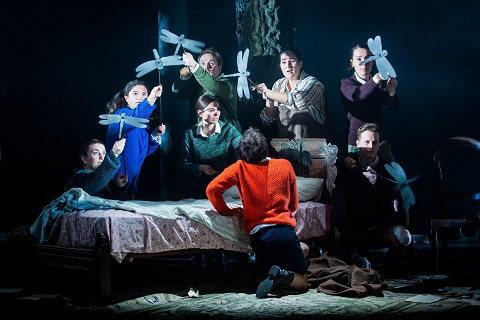 Ravel’s opera is a perfect choice for a student production, offering as it
does a range of divergent characters who must be swiftly embodied in voice,
movement and costume; and, on this occasion singing, design and
choreography came together with a directness and simplicity – and ‘dark
undertone’ – which was compelling. Not so much whimsey as witchery. This
was not a picture-book, cutesy childhood milieu: bookshelves and central
bed were messy; matching tents on opposite sides of the stage spilled fire,
frogs and other fantastic fare to taunt the petulant youngster; there was
an underlying grittiness, as when the child angrily ripped down his
paper-thin walls to ‘escape’ into the garden. 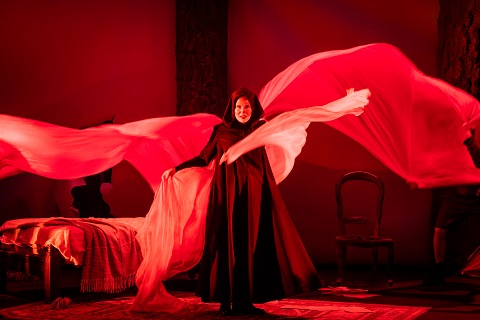 Conductor Gareth Hancock whirled us through the rapidly succeeding episodes
creating a dream-like disorientation and spontaneity. The vocal roles are
‘small’ in the sense of ‘brief’, but they really need to make their mark
with succinct directness, and so they did. La bergËre (AimÈe Fisk) and Le
fauteuil (Will Pate) combined vocal clarity and strength of purpose in
escaping the mischievous imp with Louis quatorze dignity; James
Geidt’s L’horloge comtoise was aptly piqued having had his pendulum
pinched. The piquant dance between La thÈiËre (Ryan Williams) and La tasse
chinoise (Hannah Poulsom) suggested that they shared a bitter brew rather
than a jazzy syrup. Hand-puppets and dragon-fly wands conducted a surreal
bombardment as the tormented animal kingdom bit back, the crudeness of the
design perfectly capturing the unsophistication of the child’s world.
Especial mention should go to Lina Dambrauskait? whose Fire shone with the
sort of gleaming vocal intensity and brightness that we heard last year
when she sang the title role in Semele, and Alexandra Oomens who
was a radiant and dramatically commanding Princess.

Having evoked Tchaikovsky’s strange sound world with security and
expressiveness, the Royal Academy Sinfonia were occasionally challenged by
some of the many demands that Ravel makes of the instrumentalists, but they
conjured the varied musical styles with flair and colour.