Enamoured of Jupiter, she craves to transcend her home among mere mortal
and forge new heavenly alliances. Held back by practicalities, she refuses
to compromise, preferring to push those close to her to the brink. When her
wish is finally granted, the result is apocalyptic: she is consumed by
thunderbolts, brusquely despatched to a galactic hinterland, and instantly
regrets her own self-serving naivety and foolishness.

This tale of leaving, loving and losing may sound all too familiar, given
the current political context. Certainly, William Congreve’s libretto –
which was originally intended for a production which never took place, in
the Queen’s Theatre some forty years previously, with music by John Eccles
– reflected contemporary political anxieties, not least in its portrayal of
a failed royal marriage. By the time an anonymous author adapted Congreve’s
text for Handel’s 1743 Semele the political context had changed,
but the rival London theatres were engaged in a political cut-and-thrust of
their own, and Handel had already begun to look to the English oratorio as
a form that might save his own financial bacon.

Semele
was originally heard in a concert performance at Covent Garden in February
1744, presented ‘after the manner of an oratorio’. But, that didn’t fool
anyone: Charles Jennens, librettist of Messiah among other Handel
oratorios described Semele as a ‘bawdy opera’ while John
Mainwaring, Handel’s first biographer, wrote in 1760 that ‘Semele
is an English opera but called an oratorio, and performed as such’.

Concert, semi-staged, staged … none of these terms seem apt for this
performance by The English Concert under their director Harry Bicket at the
Barbican Hall. It was quite a simply an evening of delightfully and
unwaveringly engaging theatre and a terrific musical treat. Un-costumed,
and with gesture and movement left to the singers’ discretion, its dramatic
impact derived solely from what we heard – from the superb team of
soloists, instrumentalists and chorus – and from the manner of delivery as
guided by Bicket and entrusted to the soloists’ own persuasive instincts,
with several of the cast singing from memory and others almost entirely
off-score.

And what a team of soloists it was: a genuine cross-Atlantic collaboration,
with three singers hailing from the US and three from the UK. It was also
satisfying to be given a chance to hear again singers who have recently
impressed, as well as to hear new voices for the first time. The title role
was taken by Brenda Rae whose

at the end of 2018 made a striking impact. Recently, at the

, Olivia Fuchs fashioned Semele into a celebrity YouTuber, worshipped by a
crowd of social media obsessives; and, the theme of the

is Handel’s Divas. But, Rae’s Semele was no egotistical prima
donna, strutting, stomping and sulking until she got her own way. Indeed,
in Act 1 Rae was surprising restrained, holding back her silvery soprano
and slightly concealing its shine, though even at its most tender and
restrained Rae’s vocal line floated above or through the accompaniment with
focus and presence. The first sign of mischief came with the act-ending
‘Endless Pleasures, endless love), Rae’s eye’s glinting with a hint of the
vocal sparkle that would later erupt. 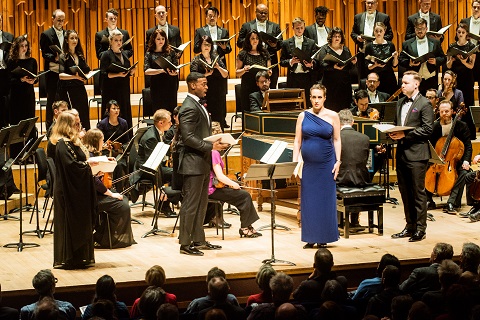 This was a gentler Semele than we are sometimes presented with, and Rae’s
affecting shapeliness of phrase in Semele’s Act 2 arias, ‘O sleep, why does
thou leave me?’ and ‘With fond desiring’, made her dilemma and doubts more
poignant than is sometimes the case. In Act 3, though, urged on by Juno,
Semele’s solipsism erupted in a glistening display of self-love: ‘Myself I
shall adore’ was a glory of rib-tickling coyness, and now the strength of
Rae’s soprano was unleashed, the jewel-like spark lit. The coloratura was
so smooth and clean it seemed almost too easy. And, luminosity marked
Semele’s repentance of her destructive ambition, suggesting less regret
than acceptance.

– whetted the appetite for her doubling up here as Ino/Juno, and we were
not disappointed. Despite a spangly silver shawl, it wasn’t always clear
where Ino ended and Juno began, but that was of no import. Like Handel’s
genre, DeShong’s voice seems to elude definition: soprano, mezzo,
contralto, it encompasses and assimilates elements of them all. The top
notes tingled, and the lower inky expanses mesmerised. What wonderful
layers and textures, too: plummy, honeyed, smoky, gleaming. DeShong’s range
seems limitless, rising and falling, and it’s a voice that feels free but
is meticulously focused. The legato phrases of ‘Turn hopeless lover’, in
which Ino first expresses her unrequited love, were exquisitely sculpted
but replete with burning, repressed passion. The self-congratulatory
extravagances of Ino’s moment of self-determination, ‘Hence, Iris, hence
away’, were bulls-eye-precise and lyrically appealing – no hint of
hootiness, though vigorously accented. 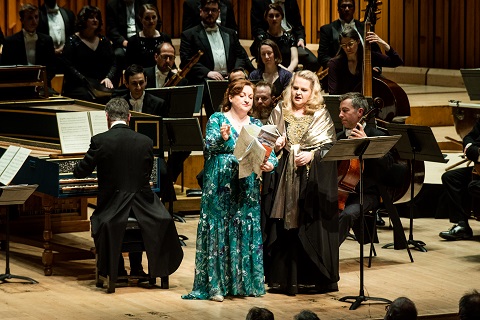 Benjamin Hulett was a dashing and, paradoxically, very ‘human’ Jupiter,
evincing real flesh-and-blood ardency and compassion. In Act 2 Jupiter has
three very different arias in close succession and Hulett was master of
them all. The long, long line he crafted in ‘Lay your doubts and fears
aside’ attested to both courage and an excellent breathing technique, while
‘I must with speed amuse her’ was agile and accurate. ‘Where’er you walk’
resonated with genuine feeling. If some of Hulett’s ornamentations of the
da capo repeats were elegant but decorative rather than expressive then who
could complain.

I have not heard American bass Soloman Howard before, but I’d very much
like to hear him again soon. His Cadmus, King of Thebes, was authoritative
but truly melodious – a quite spiritual and reverential father, rather than
a bullying patriarch. Howard expressed Somnus’s sleepy displeasure, in
‘Leave me, loathsome light’, in a wearily distanced tone and, at the
mention of the nymph Pasithea, his sudden perky transformation into agile
virility in the ensuing ‘More sweet is that name’ was classic comic
understatement.

Ailish Tynan’s Iris was a fizzing bundle of fun-loving pragmatism; she had
no time for Ino’s moping, resourcefully supplying her with a road-map of
the planetary spheres, and when her practical efforts were spurned, kicking
the map aside and tormenting her mistress with an Okay magazine
centrefold of the soon-to-be-weds, then flouncing off to indulge in the
gossip. Iris’s report that Jove has installed Semele in a palace atop a
mountain, ‘There, from mortal cares retiring’, shone brightly and gave
Tynan the opportunity to display her terrific trill.

Christopher Lowrey was an agile-voiced Athamas, and his countertenor
carried easily with no hint of strain. The roles of the Priest (Act 1) and
Apollo (Act 3) were taken confidently by Joseph Beutel and Brian Giebler
respectively, members of the fabulous Clarion Choir whose intonation and
diction were immaculate and who showed they could sing a fugue with light
vigour as readily as they could conjure an expressive expanse of sustained
and sensitive sound. There was so much drama, too, in the playing of the
English Concert. Nadja Zwiener worked tirelessly and, paradoxically, her
labours resulted in a wonderful lightness: the violins’ bows were
tremendously buoyant, almost breathlessly so. Some might have found the
string textures too ‘short and spiky’, but warmth derived from the full
complement of players – even if the woodwind did not always manage to come
to the fore – and Joseph Crouch’s cello obbligatos were highlights of a
stellar evening.

in full swing and the

playing in the Linbury there are no shortage of Handelian treats currently
available in London at this time. But, this Semele was a special
performance. And, Brenda Rae saved the best until last: as Jupiter appeared
in god-like form, thus sealing her fate, “Ah me! Too late I now repent” was
her own heavenly response. Self-adoring she may have been, but at that
moment she was simply awe-inspiring and adorable.